As I've noted a number of times, exhausted consumers are the best case for economic pessimism. Real wages have declined by about 2% since late 2010. Real disposable income also declined beginning in spring 2011 and did not make up all of the loss by year's end. Meanwhile, those consumers have been faced with yet another spike in gas prices.

So, why haven't consumers thrown in the towel? Part of the answer is that they have spent much of the savings they accumulated since the onset of recession in 2008. Another is that consumers appear to have become singularly focused on energy efficiency, finding ways to cut back on gasoline usage rather than purchases of other products and services.

A third important part is refinancing debt at lower interest rates, thus freeing up more disposable income. Since 1981, mortgage rates have almost relentlessly declined, allowing consumers to refinance their debt at lower and lower rates frequently. Most of the time, this has masked the fact that median, and even mean, household incomes, have stagnated or declined. For example, we know that median household income has never equalled its peak in 1999. Despite that fact, recessions, including the severe 2008-09 recession, have only occurred when at least 3 years have passed without consumers having the opportunity to refinance, as shown in this graph of mortgage rates, which highlights those periods where interest rates are higher than they were 3 years prior in red: 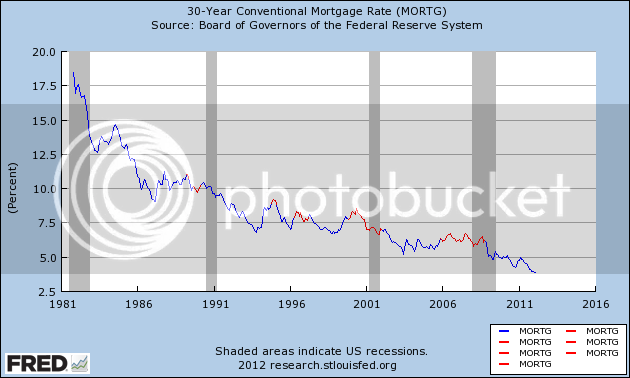 All three recessions since the end of the 1981-82 recession have occurred at those times, including 1990, 1999-2001, and 2006-08. Lest you think this is some new metric I'm reporting on in order to justify bullishness, I noted its importance to avoiding recession as early as 2007, saying that Hard Times were near, and it was an important reason why I said a recession looked likely by late 2007.

The importance of the continued ability to refinance debt at lower rates is shown in this graph from Mortgage News Daily showing the amount of refinancing over the last 5 years compared with mortgage rates: 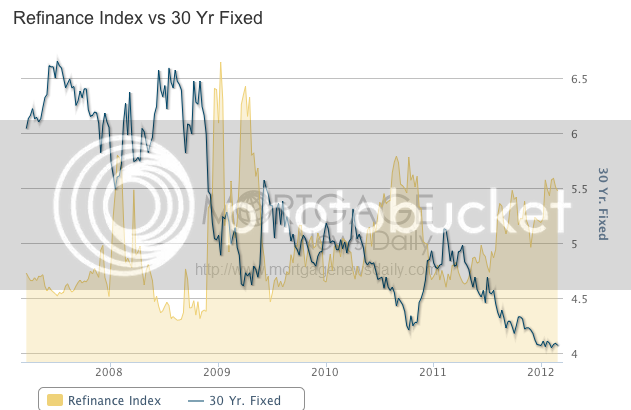 You can see that refinancing slowed to a trickle in 2007, but picked up as rates fell in the latter part of the recession, and again each time rates have made a new low since, including the last 9 months. As a result, household debt as a share of disposable income has resumed its decline as of the most recent release, covering Q4 2011, by the Federal Reserve, shown below: 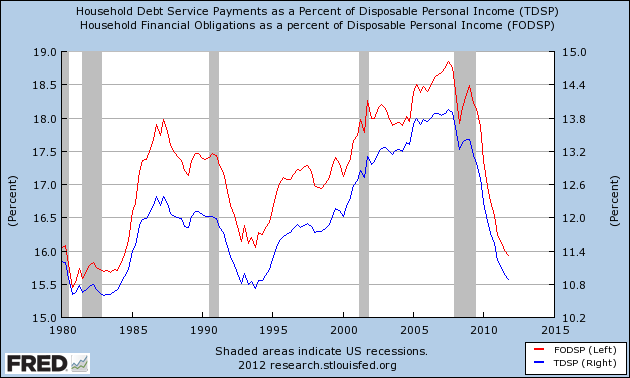 Since 1982 it has been true that, so long as households can refinance at lower rates, a recession has been avoided. This is a crucial piece of the puzzle as to why consumers haven't rolled over and cut back on spending in the last year, putting the economy back into recession.
Posted by New Deal democrat at 2:00:00 PM