Notes on the Bond Market

For a few months at the start of this year, things were looking up for stock market investing. Optimistic about growth, investors were again putting their money into stocks. In March and April, when the stock market rose 8 percent, $8.1 billion flowed into domestic stock mutual funds.

But then came a grim reassessment of America’s economic prospects as unemployment remained stubbornly high and private sector job growth refused to take off.

Investors’ nerves were also frayed by the “flash crash” on May 6, when the Dow Jones industrial index fell 600 points in a matter of minutes. The authorities still do not know why.

Investors pulled $19.1 billion from domestic equity funds in May, the largest outflow since the height of the financial crisis in October 2008.

Over all, investors pulled $151.4 billion out of stock market mutual funds in 2008. But at that time the market was tanking in shocking fashion. The surprise this time around is that Americans are withdrawing money even when share prices are rallying.

The stock market rose 7 percent last month as corporate profits began rebounding, but even that increase was not enough to tempt ordinary investors. Instead, they withdrew $14.67 billion from domestic stock market mutual funds in July, according to the investment institute’s estimates, the third straight month of withdrawals.

A big beneficiary has been bond funds, which offer regular fixed interest payments.

As investors pulled billions out of stocks, they plowed $185.31 billion into bond mutual funds in the first seven months of this year, and total bond fund investments for the year are on track to approach the record set in 2009.

Here is the accompanying graphic: 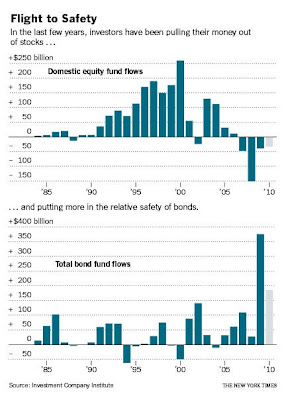 But in the Information Age, you can find out anything about anything on—where else?—Google. Google Trends tracks what people are searching as well as how many news stories mention the search term. And, observers Nicholas Colas, chief market strategist at BNY ConvergEx Group, "bubble" seems to have a hold on the imaginations of Google users for the better part of the past 18 months.

Colas notes that it takes a while for a bubble to inflate fully and burst. The peak in Google searches for "housing bubble" was in 2005—years before the top in the market. It takes time, and usually leverage, to get the last, credulous buyers who ignore all the warnings to buy at the top tick.

But as for the terms "bond bubble" and "Treasury bubble," Google hasn't had enough searches to register a trend, Colas finds. That suggests bond investors "seem oblivious to bubble chatter," so he concludes that any backup in yields is apt to be met with more buying.

More importantly, Gluskin Sheff's David Rosenberg—who's been spot-on in his call on bonds and the economy slowing to stall speed—also takes issue with the two Jeremies' assertion that the $559 billion influx into bond mutual funds and $233 billion exodus from equity funds from January 2008 to June 2010 signals a bubble. If anything, it shows households' increased acumen, says Rosenberg, given that Treasury bonds returned 13% over that span while stocks lost 21%.

A similar bubble is expanding today that may have far more serious consequences for investors. It is in bonds, particularly U.S. Treasury bonds. Investors, disenchanted with the stock market, have been pouring money into bond funds, and Treasury bonds have been among their favorites. The Investment Company Institute reports that from January 2008 through June 2010, outflows from equity funds totaled $232 billion while bond funds have seen a massive $559 billion of inflows.

We believe what is happening today is the flip side of what happened in 2000. Just as investors were too enthusiastic then about the growth prospects in the economy, many investors today are far too pessimistic.

Today the purveyors of pessimism speak of the fierce headwinds against any economic recovery, particularly the slow deleveraging of the household sector. But the leveraging data they use is the face value of the debt, particularly the mortgage debt, while the market has already devalued much of that debt to pennies on the dollar.

This suggests that if the household sector owes what the market believes that debt is worth, then effective debt ratios are much lower. On the other hand, if households do repay most of that debt, then the financial sector will be able to write-up hundreds of billions of dollars in loans and mortgages that were marked down, resulting in extraordinary returns. In either scenario, we believe U.S. economic growth is likely to accelerate.

1.) Personally, from an investing perspective I'm a big fan of high quality, dividend paying equities and some fixed income. For example, I like portfolios that have companies like Exxon, MMM, coke, etc... The reason is with a dividend you always have a little bit of cash coming in. This puts a natural floor under the stock and provides an income stream for further investments. I'm hoping this style of investing is catching on; the pure growth play is a huge, double down bet at the investment table.

2.) As both NDD and I have pointed out, we've seen in increase in the personal savings rate over the last year or so. That money has to go somewhere. Savers see bank accounts paying next to nothing, so a bond mutual fund with liberal withdrawal privileges is the next best thing.

3.) In addition to the Treasury market, consider these charts of the mortgage backed bond market, investment grade corporate bond market and the junk bond market: 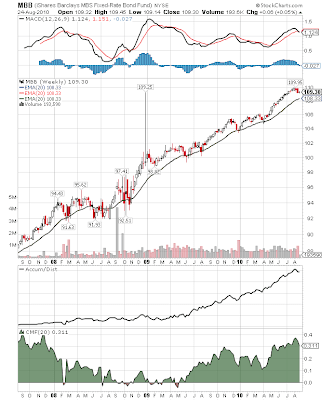 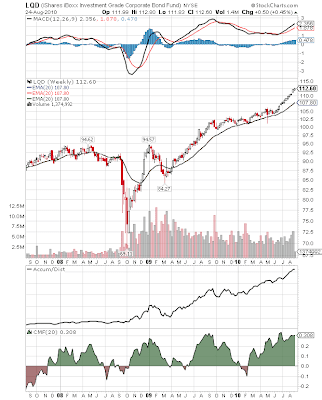 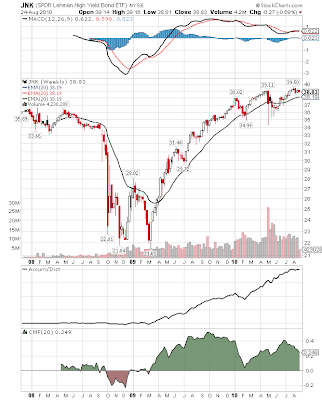 Money is clearly flowing into a variety of fixed-income funds, not just the Treasury Market.

4.) All of the fixed income markets have an inflection point that starts a rally right around the break-out of the Greek crisis this spring. This tells us that the Greek crisis was probably a catalyst event for the investment public, and a clear signal to put on the breaks and move money into more conservative venues. Since then, the US economy has printed weaker numbers, which has confirmed that asset shift to income yielding investments.