Orders for durable goods, products such as autos and appliances designed to last three years or more, rose 0.3% in July from June, largely due to aircraft orders, the Commerce Department said Wednesday. Excluding the volatile transportation sector, orders tumbled 3.8%.

The figures provided the latest evidence that the rebound in manufacturing, which propelled the early stages of the economic recovery, is unlikely to remain strong enough to offset weakness in consumer spending and waning support from federal stimulus.

A key gauge of future business investment—orders for nondefense capital goods excluding aircraft—fell 8% from a month earlier. That drop, the worst decline since January 2009, offset the gains seen in May and June.

While the durable-goods data can be volatile, they raised doubts about whether the underlying strength of businesses can keep the economy expanding in the second half of the year.

"The recovery has been relying so heavily on the industrial side of the economy for support, and it seems as though that support has now all but disappeared," said Ellen Beeson Zentner, an economist at Bank of Tokyo-Mitsubishi UFJ.

We've been seeing this slowdown in the latest regional manufacturing numbers.

The Empire State Manufacturing Survey indicates that conditions improved modestly in August for New York manufacturers. The general business conditions index rose 2 points from its July level, to 7.1. The new orders and shipments indexes both dipped below zero for the first time in more than a year, indicating that orders and shipments declined on balance; the unfilled orders index was also negative. The indexes for both prices paid and prices received inched down, while employment indexes were positive and higher than last month. The six-month outlook weakened; though future indexes were generally still positive, many fell in August, with the notable exceptions of the future employment and capital expenditures indexes, which climbed after falling last month.

And here is the chart from the Philly Fed: 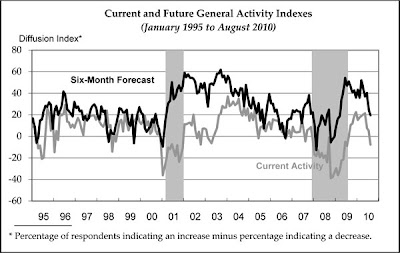 Notice it dropped below 0.

And here is the PMI. 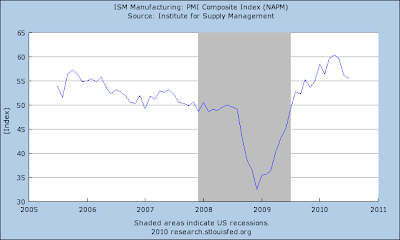 While still positive, it has moved lower the last few months as well. 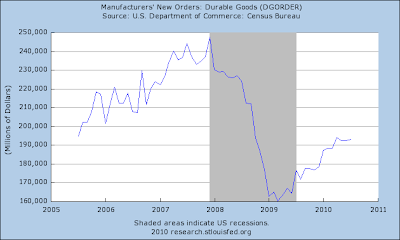 Although still in an uptrend, durable goods orders have moved near sideways for the last few months. 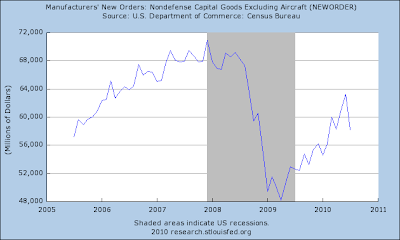 And the ex-aircraft number dropped in a big way last month.

For more on manufacturing, see this interview in the WSJ.
Posted by Unknown at 11:30:00 AM