A Look At the Value Line Average

Have you noticed that Valueline Arithmetic is currently correcting from a high it made earlier this year? That recent peak was an all time high, and therefore was higher than the peak before the 2008-2009 crash. The Drawdown from this recent peak is approximately 15%. What do you make of this situation? Especially given that the S&P 500 has only recovered about 50% relative to its pre-crash high,while Valueline Arithmetic recovered over 100% and is now correcting. Would be very interested in what you have to say about this situation.

First, I had completely forgotten about Value line. For those of you who are unfamiliar, VL does some of the best fundamental research on the planet. They used to issue two huge binders, broken down by industry. Each industry section began with a general overview of the industry. Then the report would fundamentally break down each company within the industry and assign each company a ranking (which I think was 1 through 5). If I remember correctly, VL's top picks usually outperformed the market on a pretty regular basis. Anyway, this is a great source of information.

That being said, here is how Value Line explains their index:

On June 30, 1961, we introduced the Value Line Composite Index. This market benchmark assumes equally weighted positions in every stock covered in The Value Line Investment Survey. That is, it is assumed that an equal dollar amount is invested in each and every stock. The returns from doing so are averaged geometrically every day across all the stocks in The Survey and, consequently, this index is frequently referred to as the Value Line (Geometric) Average (VLG). The VLG was intended to provide a rough approximation of how the median stock in the Value Line universe performed.

On February 1, 1988, Value Line began publishing the Value Line (Arithmetic) Average (VLA) to fill a need that had been conveyed to us by subscribers and investors. Like the VLG, the VLA is equally weighted. The difference is the mathematical technique used to calculate the daily change.

The VLA provides an estimate of how an equal-dollar weighted portfolio of stocks will perform. Or, put another way, it tracks the performance of the average, rather than the median, stock in our universe. It can be shown mathematically, for all practical purposes, that the daily percentage price change of the VLA will always be higher than the VLG. The systematic understatement of returns of VLG is a major reason that the VLA was developed. Moreover, although the differences between daily price changes may seem small, the magnitude of the annual differential between the two averages can be very large. The greater the market volatility, the larger the spread between the geometric and arithmetic averages becomes.

In 1965, when the current Timeliness Ranking System began, our only market average was the VLG, so we scored the ranks on a geometric basis. This allowed us to compare the performance of the ranks versus the market (as measured by the VLG). After we started the VLA, we began scoring the ranks both on a geometric and arithmetic basis.

In other words, the VLA is an index of the average VL stock. That being said, here is the weekly chart: 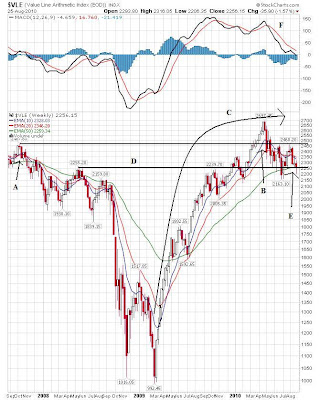 The reason this average has outperformed the SPYs is VL has a better selection of stocks. That shows they're pretty good at their job.

The index has printed two highs over the last few years -- A and B. Prices reached areas around previous highs and then started to move sideways. Notice how prices have risen and then turned into more of a sideways orientation (see curved line C). Since hitting previously established highs, prices have found support at line D and the 50 week EMA. Also note the index has declining momentum (F). Finally, take a good look at the EMAs (E). The shorter are above the longer, but the 10 and 20 week EMA are moving lower and the 10 is slowly working below the 20. This is a bearish development.

So -- what does this mean? All the equity averages -- even the VL -- is suffering from the concern over the US economy's overall direction right now. The recent spate of economic numbers indicate the economy is slowing which is bad for all equities.

However, the higher quality of the VL selection process is probably preventing an overall crash in this average.
Posted by Unknown at 2:00:00 PM