Way back in 2006,(see, for example, here) I started to develop a narrative for what I called "the s l o w - m o t i o n bust" -- a 19th century style debt panic that, because of all the Great Depression and post World War 2 structures put in place to prevent exactly that, would unfold in very slow motion, taking years to play out. That's why I've always cautioned that my bullishness on the US economy last year and earlier this year has been tempered by the idea that it is "Springtime during an Ice Age". In other words, it is a cyclical economic expansion that unfolds during a secular downturn that won't be over until the structural issues of debt and the declining middle class in the US are resolved.

It [ ] helps to keep a narrative in my head for how the numbers are likely to develop, and I am beginning to expect the following:

The consumer sector of the economy (the 'bonddad economy') is in recession right now (or will be imminently).
Despite that, the 1906 industrial economy (the 'kudlow economy') will continue to grow.
- The growth in the kudlow economy will continue to outweigh the nevertheless-increasing drag of a recession in the bonddad economy (daisycolorado wins her bet).
- This also means that the fed's attempt to tame inflation will fail.
- Thus, the fed will continue to have to raise rates, against its will, to preserve some value in the dollar and combat rising inflation.
- Inflation will not be brought to heel until the kudlow economy contracts (i.e., goes into recession as well).
- The consumer will be in no shape to rescue the industrial economy's collapse, as the consumer did in 2001-2.
- At some point in the next 2-4 years, we have the worst recession since and maybe including 1981-2.
- We have then reached the midpoint of the 60 year kondtrafieff interest rate cycle, and interest rates and inflation will rise in a secular manner for the next 30 years

It's a narrative, I'm chewing on it, but the more I think about it, the more it makes sense to me.

But the offset to that deflation is, the global dollar glut....

There may be Very Bad Days for either of these forces. But they are both MegaSized and will takes years to play out. Mortgage resets in particular are less than 1 year into a 5 year death spiral.

This is the end of the disinflationary cycle that began in about 1980. Debt will be punished, savings will slowly be rewarded. It is a catastrophe that will play out in slow motion.

Not perfect of course, but not a bad narrative for what did in fact unfold in the next couple of years. I would say we have been through 3 Episodes of "the s l o w m o t i o n bust". First was the Wile E. Coyote moment of late 2007 - early 2008 during which the economy hung suspended in mid-air, but hadn't dropped yet. Then we got "The Panic of 2008" (btw, that post was published in November 2007 and almost exactly laid out the panic scenario that did take place the next year) including the US's "very bad day" of Black September 2008 as the entire US financial system failed systemically and had to be propped up by massive infusions of taxpayer dollars. The third episode is The Respite, in which the bailout succeeded in stabilizing the economy, consumers slowly regained enough confidence to spend again, global trade and manufacturing resumed, and finally employment bottomed and increased (and in the private sector, is still increasing) again.

It looks like we are embarking on a new phase, that started out with episode 4: "Europe's Very Bad Day." This meltdown from March and April, as bad luck would have it, coincided with the BP Gulf disaster and the ending of the $8000 mortgage credit in the US, and was exacerbated by Congress's insane refusal for months to give revenue-strapped states the aid they needed to get through a second bad year.

Perhaps more important than those transitory effects is the "choke collar" that the price of Oil places on any US recovery. No sooner is there growth than Oil charges back to $80+ a barrel, putting it at or near the 4% of GDP level which in the past has always triggered a slowdown or recession.

Some of the above more transitory problems, such as the Gulf oil catastrophe, have resolved themselves. Others, like new home permits, appear to have bottomed. On the other hand, Greece hasn't suddenly become solvent, and the recent spike in new unemployment claims suggests that states and localities continue to lay off 10,000s of workers.

More question marks are the continuing exposure of TBTF US banks to toxic debt, and whether the Treasury's open-ended commitment to pour endless taxpayer dollars into those institutions will overcome any difficulties. Finally, the renewed downturn in home prices may mean more underwater homeowners going into foreclosure or "walking away."

In the short term, it is well to remember that we have neither the $147 Oil nor the credit crisis that drove the 2008 economic crash. Leading Indicators so far only indicate a slowdown to zero growth, not an outright double-dip recession.

In the longer term, over at least the next two years, the S l o w - M o t i o n Bust will continue to play out until the underlying systemic problems are addressed. That includes:

- household debt being paid down to levels at or near where they were before refinancing debt became the norm (i.e., the 1980s) 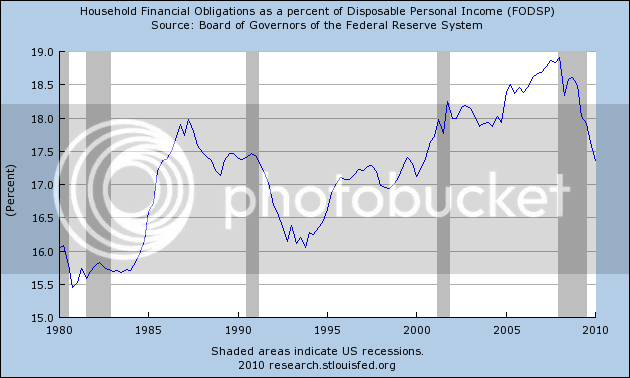 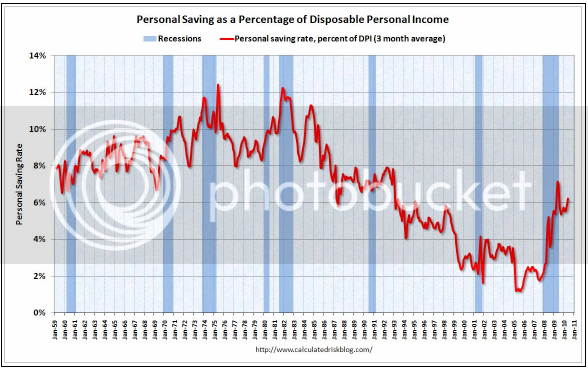 Only when the toxic debt is purged from the system will the s l o w - m o t i o n bust be truly over.