A note about Housing Permits, Starts, Sales, and Prices

Here's what Calculated Risk said about June existing home sales when they were reported a month ago:

So July existing home sales were reported yesterday and, surprise surprise, they collapsed. This didn't prevent the usual Circle Jerks of Doom from taking place at the usual locations.

In the first place, you have to distinguish between volume, i.e., the number of housing units being sold, from the prices at which they are being sold. As I pointed out just a couple of days ago, housing prices are nowhere near bottom and probably have at least two more years to fall. Here's a graph from Ned Davis Research via The Big Picture, making that same point:

But sales, i.e., volume, are another story altogether. Here's a graph, showing house permits (blue) and starts (red) since the peak of the housing bubble five years ago: 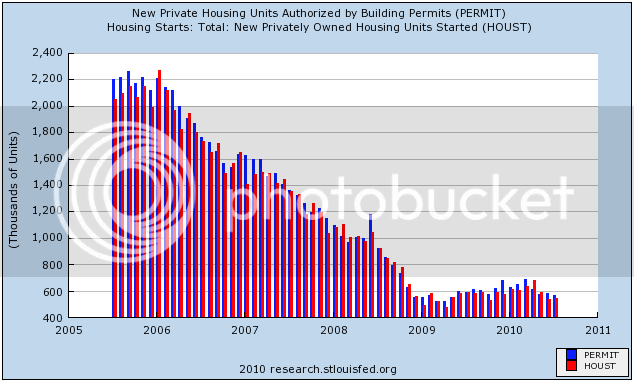 Note that both these series bottomed out in early 2009 and have not made new lows since.

Here's a close-up of the same two series since then: 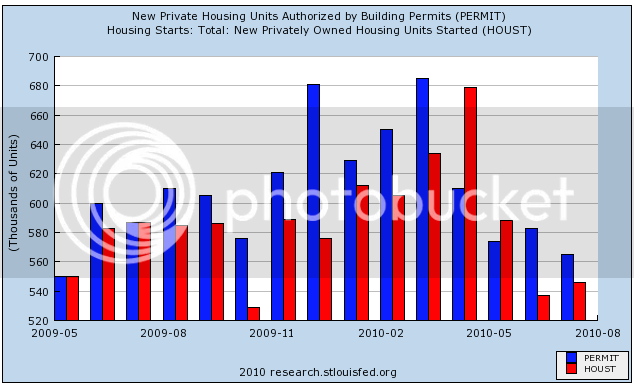 Notice that there are two peaks, coinciding with the original, and extended, end dates for the $8000 housing credit. Notice that permits fell immediately in May and have stayed in the same range in the two months since. Starts, as per usual, lagged one month.

Now here is a graph showing purchase mortgage applications from the mortgage bankers association from the same time period as the second permits and starts graph above: 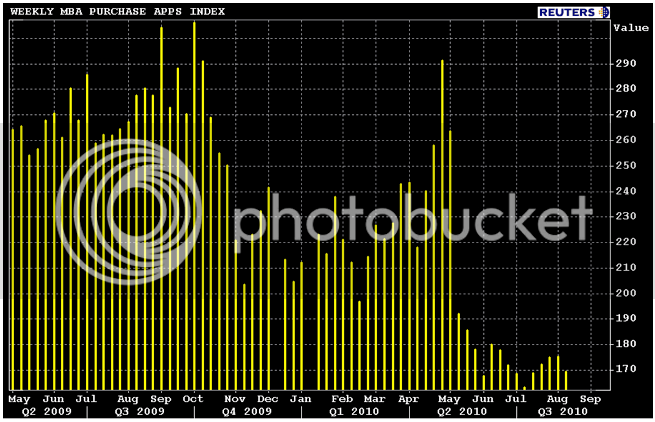 Notice that purchase applications fell off a cliff immediately after the April 30 deadline, and have been in a range since the beginning of July.

This morning, new home sales followed the same pattern. After surging to (all months revised) 414,000 in April, they fell to 281,000 in May, rose to 315,000 in June, and fell back to 276,000 in July (sorry, no graph).
Now here are existing home sales. The graph covers a longer time period, but the two peaks and subsequent swan dives after the expiration dates of the housing credit are obvious: 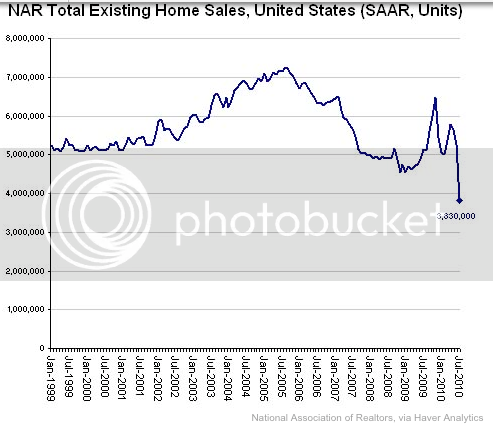 Home sales declined in June, but the real force of houses that went under contract after the April 30 ending of the $8000 tax credit wasn't felt until July (exactly as CR said). If that isn't good enough for you, then consider Prof. Dean Baker of "Beat the Press", who isn't exactly a raging optimist, who said, "Economists With a Clue Were Not Surprised by the July Plunge in Home Sales" , noting that they came, on schedule, about 6 - 8 weeks after the plunge in mortgage applications.

While I can't swear that August existing home sales won't be worse than July, they probably won't be substantially worse. Furthermore, because sales are seasonal, it is perfectly possible that December - February will be worse than this. What I think is just about certain is that this is the seasonally adjusted bottom taking place right now, perhaps including next month, a bottom that was delayed a year by the housing credit. Which will differentiate 2011, which will likely feature slowly rising sales with still-declining prices, from the 2006-08 period during which both sales and prices were declining.

But anyone who says that home sales are "collapsing" as an ongoing event is either ignorant or is getting their kicks by being the host of the Circle Jerk of Doom, or both.