Real gross domestic product -- the output of goods and services produced by labor and property located in the United States -- increased at an annual rate of 1.6 percent in the second quarter of 2010, (that is, from the first quarter to the second quarter), according to the "second" estimate released by the Bureau of Economic Analysis. In the first quarter, real GDP increased 3.7 percent.

Let's take a look at the contributions to the percentage change: 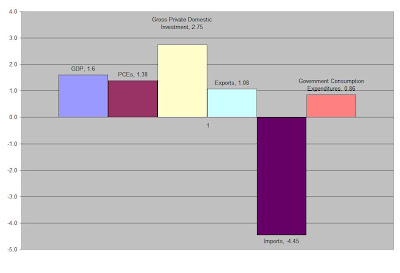 The big issue is that imports subtracted 4.45 points from growth. Everything else is OK. From the preceding quarter, notice the PCEs increased 2%, gross private domestic investment increased 25%, exports were up 9% and government spending increased 4.3%. Imports increased a 32.4%, largely because of a 39.3% increase in imported goods. In other words, the real issue here is the increase in the trade deficit: 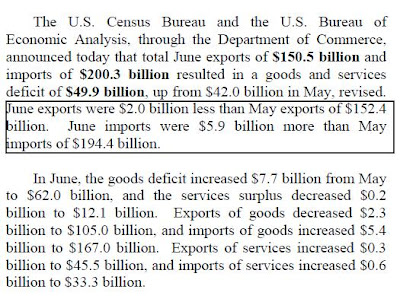