But here in the heartland of America, senior executives say neither side's assessment fits.

They blame their profound caution on their view that U.S. consumers are destined to disappoint for many years. As a result, they say, the economy is unlikely to see the kind of almost unbroken prosperity of the quarter-century that preceded the financial crisis.

Across the industrial parks and office towers of the Chicago region, in a more than a dozen interviews, senior executives said they see Americans for years ahead paying down debts incurred during the now-ended credit boom and adjusting spending to match their often-reduced incomes.

"It's a different era," said Daryl Dulaney, chief executive of Siemens Industry, which has 30,000 U.S. employees who make lighting systems for buildings and a wide range of other products. "Our hiring and investment decisions have to be prudent and reflect that."

Executives see little evidence that the economy is slipping back into recession. But they describe a business environment in which sales come in fits and starts and their customers can't predict what they will want to buy in the future.

I think this article/perception really explains a great deal about the current economic situation. First, the latest Senior Loan Survey from the Federal Reserve noted that loan demand is still weak. As the article highlights, businesses see little need to take out loans because they see a weak economy going forward.

NDD hit on a big part of it yesterday -- the paying down of debt and how that is impacting growth going forward. Consider these charts from the St. Louis Federal Reserve: 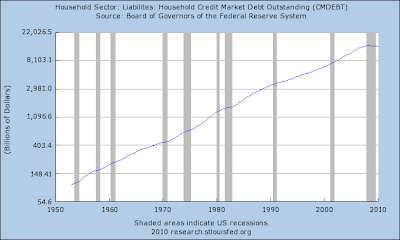 First, this chart is exponential. Total consumer debt outstanding has increased at a more or less consistent rate until this recession. Now the growth has dropped a bit as households pay down their debt. This drop in debt has occurred in both mortgage and revolving credit (neither of the following charts are logarithmic to better highlight the severity of the contraction in both): 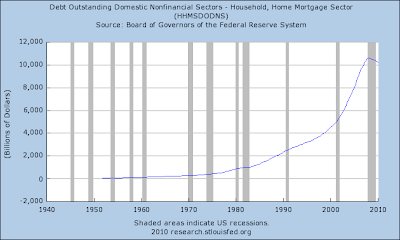 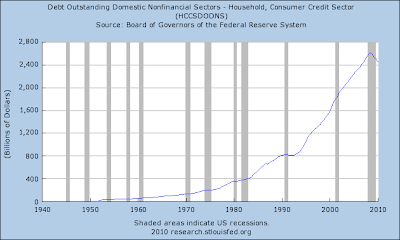 As a result of this decrease, households are under less financial stress: 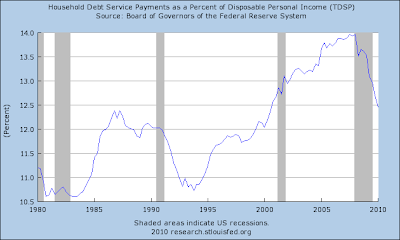 It's important to note that despite the decrease in consumer debt, the economy is seeing some increase in PCEs. 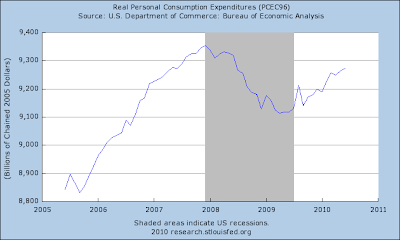 Total real PCEs are clearly off their lows, although recent revisions have placed them below the peak of the last expansion. 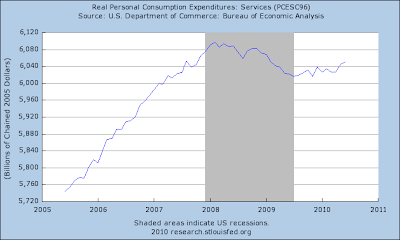 Real spending on services has increased slightly, but is better characterized as having dropped and leveled off. These comprise about 65% of total PCEs. 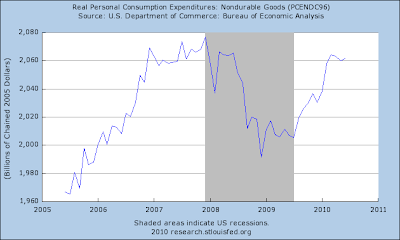 Real spending on non-durables has increased from its post recession lows, as has 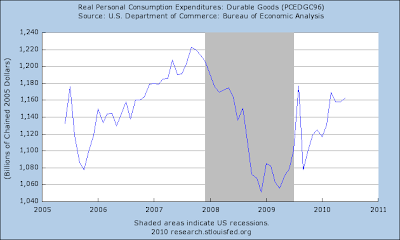 The money for this spending is coming from increased savings: 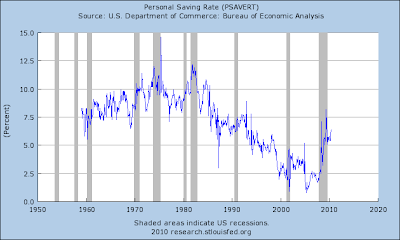 In short, the consumer is spending, just not as robustly as before. And his paying down debt is a key part of the slowdown.
Posted by Unknown at 11:30:00 AM