Texas manufacturing is still expanding, although at a slower rate.  Production, new orders and shipments all printed lower numbers, although all are still positive.

Data through June 2013, released today by S&P Dow Jones Indices for its S&P/Case-Shiller1 Home Price Indices, the leading measure of U.S. home prices, showed that prices continue to increase. The National Index grew 7.1% in the second quarter and 10.1% over the last four quarters. The 10-City and 20-City Composites posted returns of 2.2% for June and 11.9% and 12.1% over 12 months.

These numbers indicate the housing recovery is still on track.  However, I would expect this number to start slowing over the next 4-6 months.  The latest readings are from the end of June, meaning they probably don't reflect the increase in interest rates that we've been seeing over the summer.

The Richmond Fed's manufacturing number jumped sharply, rising 25 points to a reading of 14.  This index has been stuck in the doldrums for a number of months, so this reading is very encouraging.

The BEA revised the 2Q GDP up to 2.5%.  This was by far the biggest and most important economic number released last week.  While we would love for growth to be stronger, any upward revision is welcome.  NDD and I covered this report here.

The Chicago PMI increased to 53.

Real DPI -- DPI adjusted to remove price changes -- increased 0.1 percent in July, in contrast to a decrease of 0.2 percent in June.

I'm placing the DPI and PCE numbers in the neutral category because of the very weak growth in these key metrics.  While I'd expect weak wage growth in a period of 7%+ unemployment, it also means there is less money available for PCEs, which are vital for the economy to continue moving forward.


U.S. consumer sentiment retreated in August from last month's six-year high, though Americans were slightly more upbeat in their outlook than earlier in the month, a survey released on Friday showed.

The Thomson Reuters/University of Michigan's final reading on the overall index on consumer sentiment slipped to 82.1 in August from 85.1 in July.
The Bad

Durable goods orders dropped 7.3%, or .6% (-.6%) ex-transportation.  Even though this was only one month's worth of data, this number was a bit concerning.

The best news last week was the upward revision of 2Q GDP, which is always a welcome development.  Housing is also still on track, although the Case Shiller composite was for readings through June, so I'd expect some weakness to start in the next 4-6 months.  The manufacturing numbers were mixed, as three regional surveys printed positive numbers, but these are contrasted with a nasty durable goods orders print.  Consumer readings were at best just barely positive, but that's been the case throughout this expansion.

Let's turn to the markets. 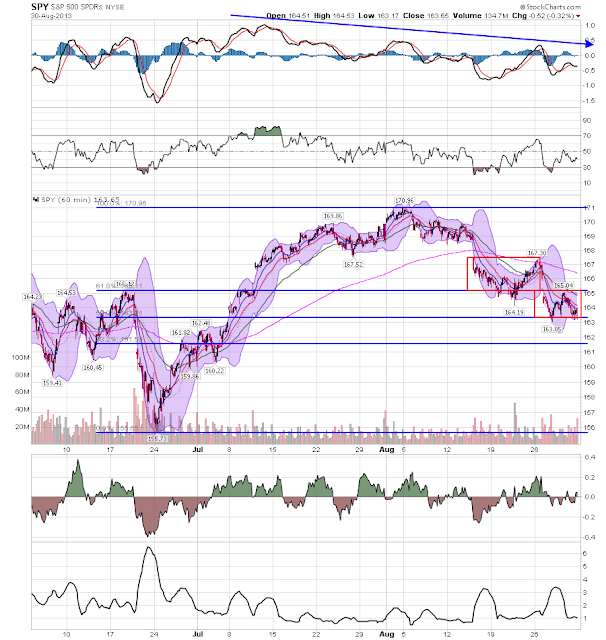 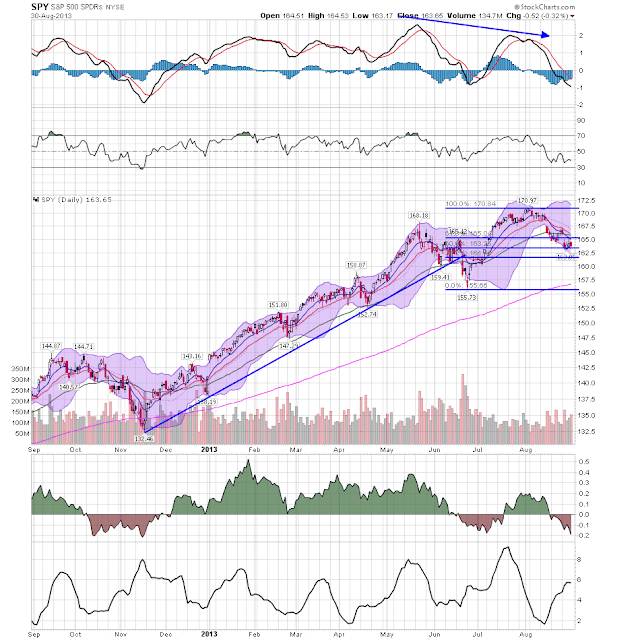 Both the 60 minute (top chart) and daily (bottom chart) charts of the SPYs show a very disciplined sell off.  Two weeks ago, prices gapped lower but used the 61.8% Fib level for technical support.  Last week, prices again gapped lower, this time using the 50% Fib level for technical support.  Both charts show declining momentum as well.  Overall, prices have only dropped a little over 4%, so this is hardly a correction to be overly worried about (at least no yet).

Also of importance on the daily chart is the fact the SPYs broke their upward trend in June, indicating that we are now trading in a sideways trading pattern. 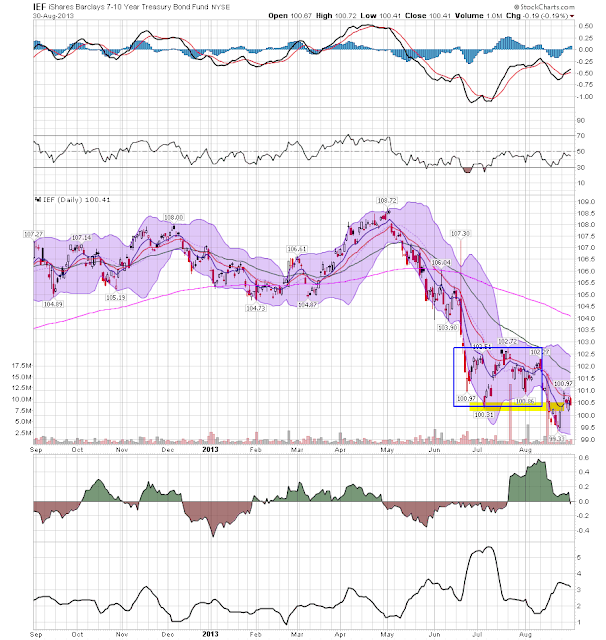 The treasury market consolidated between the 100 and 102. levels from late June to mid-August.  After dropping through support, prices rallied back to resistance at 100.  Overall, the chart is still negative with the shorter EMAs still in a negative orientation.
Posted by Unknown at 6:00:00 AM