Brazil Prints Stronger Than Expected GDP Number; Is New Growth Around the Corner?

While Brazil was once the darling of the investment community for its fast rates of growth, it has struggled over the least few quarters.  There are several reasons for this slowdown, with the largest fact the slowdown in China's growth.  As China's raw material consumption has dropped, exporters such as Brazil have seen trade revenue fall.  In addition, Brazil has structural issues such as weak domestic infrastructure investment, a wide income stratification and a difficult to navigate political system.

As a result, the government recently increased stimulus and cut payroll taxes in an effort to nudge growth faster, resulting in the recent GDP print that came in stronger than expected:

Here is the primary text from the Brazil's GDP release:

And here are the highlights from Bloomberg:

Brazil’s economy expanded more than forecast by all analysts in the second quarter, as government stimulus propped up investment and a weaker real boosted the outlook for manufacturing.

Gross domestic product expanded 1.5 percent during the April to June period, or an annualized 6 percent, the national statistics agency said today. That was the most since the first quarter of 2010 and more than all 44 forecasts from analysts surveyed by Bloomberg, whose median estimate was 0.9 percent. GDP expanded 3.3 percent from the same quarter last year.

Today’s GDP data beat analysts’ median forecast for the first time since the last quarter of 2011. Investment, which declined last year as Brazil expanded at a quarter of the 3.5 percent pace of the global economy, continued to recover, jumping 3.6 percent in the second quarter. Despite the rebound, Brazil still has one of the lowest investment rates of major emerging markets at 18.6 percent of GDP.

As the chart below shows, GDP growth has been picking up for the last four quarters:

At the same time, the new Markit numbers are not encouraging.  First,

August’s seasonally adjusted HSBC Brazil Purchasing Managers’ Index™ (PMI™) rose from 48.5 in July to 49.4, indicating a further, albeit slower, deterioration of operating conditions across the country.

Output in the Brazilian manufacturing sector fell for the second successive month in August, amid evidence of lower volumes of incoming new work. That said, the rate of contraction eased to a marginal pace. Decreases were recorded in both the investment and intermediate goods sectors, while consumer goods producers continued to signal growth.

Lower levels of new orders have now been recorded for two consecutive months, with the latest survey pointing to a marginal and slower pace of contraction. Those panel members indicating falling volumes of incoming new work reasoned that this was due to weaker demand and increased competition from Chinese manufacturers. Order book volumes fell at both intermediate and capital goods producers, while manufacturers of consumer goods signalled growth. Export business fell again in August, in part reflecting weaker demand from Argentinian and European clients. Meanwhile, purchasing activity contracted slightly in August.

As the chart shows, the trend is clearly lower: 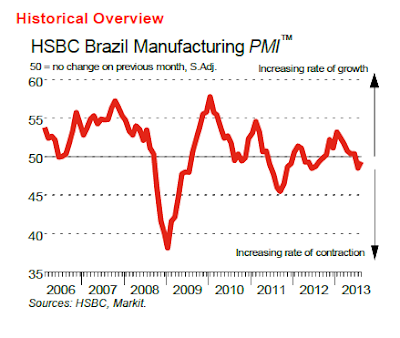 And services are in the same situation:

At 49.7 in August, up slightly from 49.6 in the previous month, the seasonally adjusted HSBC Brazil Composite Output Index posted below the 50.0 no-change level for the second successive month. Business activity fell marginally across both the manufacturing and the service sectors, with firms commenting on tough
economic conditions and subdued underlying demand.
August’s seasonally adjusted Services Business Activity Index dipped below the 50.0 no-change level for the first time in 12 months. Down from 50.3 in July to 49.7, the latest index reading was consistent with a marginal contraction of output levels across the country’s service sector. Among the six monitored sub-sectors, Post & Telecommunication registered the sharpest decline.

Like manufacturing, these numbers are also in a downtrend: 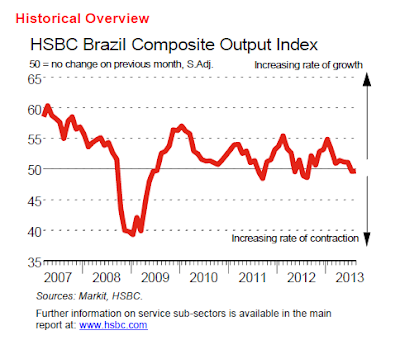 Let's take a look at the Brazilian ETF: 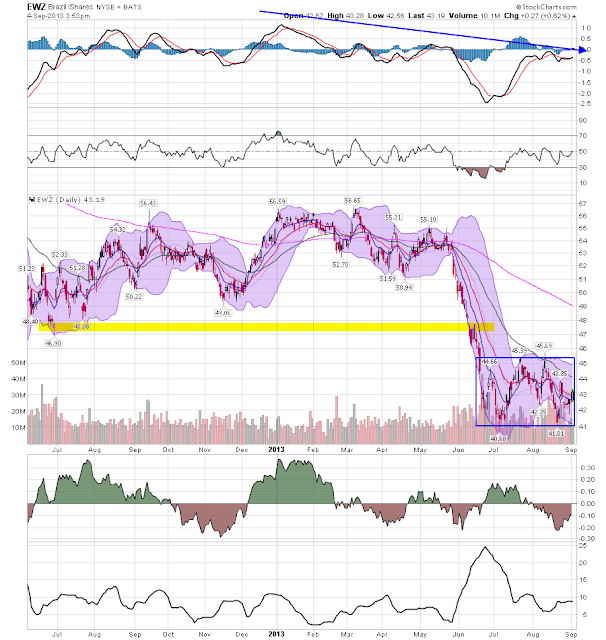 There are three key points to make about the Brazilian ETF.  First, over the last year we see declining momentum, as evidenced by the continually lower peaks in the MACD.  Secondly, prices broke long-term technical support between 47 and 48 in June.  Third, prices are currently consolidating between the 41 and 45 price area.