The trend that has had me the most worried since even before the onset of the 2008-09 severe recession has been the likelihood that households would run out of room to refinance debt at lower interest rates even as their wages languished.

While interest rates declined further with that recession and afterward until a year ago, average wage growth continued to decelerate until it was under +1.5% YoY. That kind of paltry growth left almost no room for consumers to improve their savings and spending. Then, at the end of last year, I noticed that it looked like the trend in wage growth had turned. Today's jobs report shows that that trend has continued and solidified: 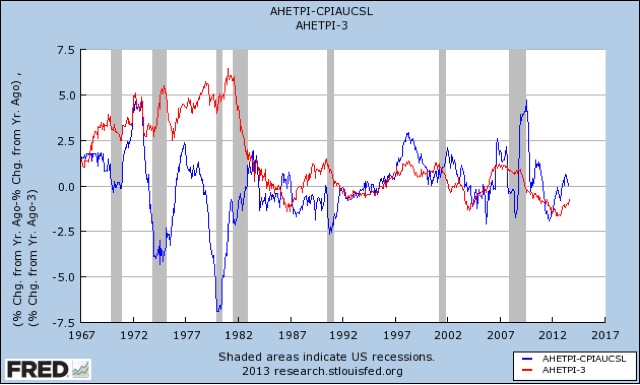 The blue line in the graph above is real, inflation-adjusted YoY wages through July (August's CPI hasn't been reported yet, but is likely to be between unchanged and +0.2%, so real YoY average wage growth is going to be improved). The red line is nominal average wages. I've included both because, with the exception of the 1990 recession, both peaked and turned down prior to the onset of recessions. Additionally, real average wages turned negative in each of those cases. Once August inflation is reported, I expect that number to be the most positive since 2010.

Obviously this is just one statistic, the time series is limited, and it isn't infallible, but it confirms that the economy is still expanding, and it does indicate that the lot of the average worker has begun to improve.
Posted by New Deal democrat at 11:27:00 AM