More On the ISM/GDP Relationship

Yesterday, NDD noted that the strong ISM reading was a very good sign for the economy, going so far as to note, "This morning's unexpectedly strong ISM report appears to put to rest any worry about any imminent economic downturn."

In correlation to his comments, consider the following two charts. 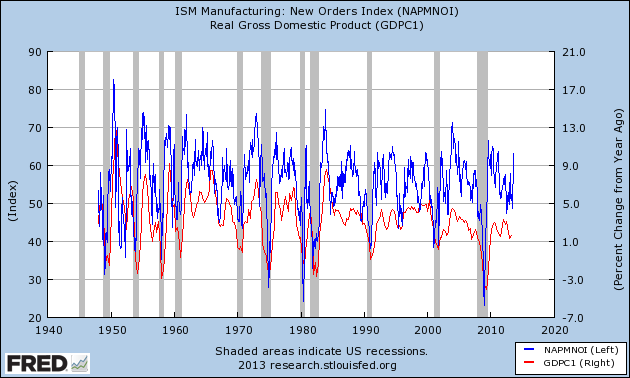 I've got the ISM new orders number (left scale in blue) and the year over year percentage change in GDP (right scale in red) on the chart above.  While the correlation used to be a bit stronger (see the very tight relationship in the 1970s) there is still a good correlation between the numbers.

The reason is actually pretty straight forward.  When market participants think the economy will pick up, they order more things like equipment to produce goods and things to sell.  Hence, the pick-up in new orders and its inclusion in the Conference Board's leading indicators series. 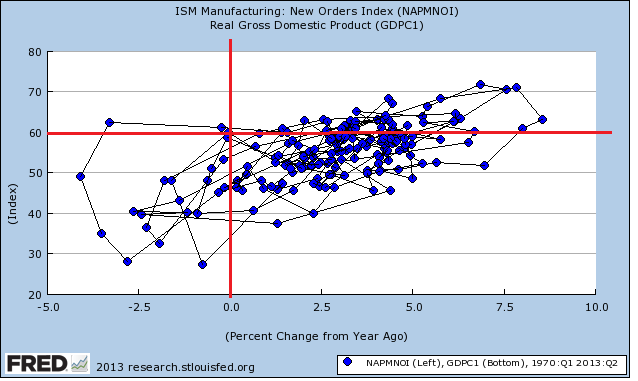 Above is a scatter plot of the ISM readings and the percentage change in GDP readings.  I've had to convert the ISM readings to a quarterly number (using an average of the three months).  This means the comparison is a bit weaker, but I believe it still makes the primary point: an ISM reading above 60 almost always correlates with positive year over year GDP growth.
Posted by Unknown at 7:27:00 AM