More on demographics and median income

Lest you think your blogger is the only one who has figured out that "median household income" is largely a proxy for the employment to population ratio, and is heavily influenced by demographics and retirement, consider Cornell University economist Richard Burkhauser's report that the 'Average American' will slide down income scale:

Changes in demographics over the next two decades will make it even more difficult to raise the median, according to a Cornell economist.

....
The most important contribution to declining income over the past decade, and particularly during the Great Recession and its aftermath, was the large number of unemployed men, they found. But looking ahead, they predicted that over the next two decades demographic shifts will be an important factor pulling the median down.

In the 1990s and 2000s the Baby Boom generation, maturing into their peak earning years, helped to boost the median income. But as they retire over the next two decades their household incomes will fall sharply.

And he makes use of this handly graph showing how median income changes by age: 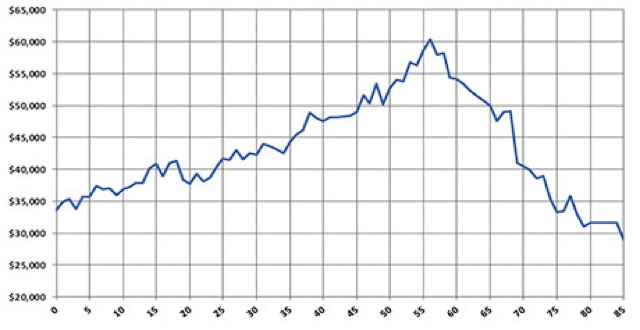 Median household income is likely to continue to trend lower for the next 15 years, purely as a matter of demographics, as the Baby Boom generation retires. In order to get a better look at working-age households only, and do away with the effect of retirements, we need to look at median household income from ages 25-54 or 25-64. The Census Bureau does this calculation, but only on a yearly basis, and the most current statistics (at table H-10) are from 2011. The series should be updated for 2012 later this month.
Posted by New Deal democrat at 8:30:00 AM