India’s economy slowed sharply in the three months to June piling further pressure on Prime Minister Manmohan Singh’s crisis-hit administration, as it struggles to find ways to support its plunging currency and reassure increasingly anxious foreign investors about its future growth.
Asia’s third-largest economy expanded by just 4.4 per cent compared with the same period in the previous year, from 4.8 per cent in the preceding three months. The figure was well below expectations and its worst performance since 2009, raising fresh doubts about government assurances that growth would pick up again later this year.

All see this from Bloomberg and Reuters.

However, India's real problem is that its growth model is no longer competitive, meaning the country must reallocate labor:


Structural problems were inherent in India’s unusual model of economic development, which relied on a limited pool of skilled labor rather than an abundant supply of cheap, unskilled, semiliterate labor. This meant that India specialized in call centers, writing software for European companies and providing back-office services for American health insurers and law firms and the like, rather than in a manufacturing model. Other economies that have developed successfully — Taiwan, Singapore, South Korea and China — relied in their early years on manufacturing, which provided more jobs for the poor.

Two decades of double-digit growth in pay for skilled labor have caused wages to rise and have chipped away at India’s competitive advantage. Countries like the Philippines have emerged as attractive alternatives for outsourcing. India’s higher-education system is not generating enough talent to meet the demand for higher skills. Worst of all, India is failing to make full use of the estimated one million low-skilled workers who enter the job market every month.

Manufacturing requires transparent rules and reliable infrastructure. India is deficient in both. High-profile scandals over the allocation of mobile broadband spectrum, coal and land have undermined confidence in the government. If land cannot be easily acquired and coal supplies easily guaranteed, the private sector will shy away from investing in the power grid. Irregular electricity holds back investments in factories.

India’s panoply of regulations, including inflexible labor laws, discourages companies from expanding. As they grow, large Indian businesses prefer to substitute machines for unskilled labor. During China’s three-decade boom (1978-2010), manufacturing accounted for about 34 percent of China’s economy. In India, this number peaked at 17 percent in 1995 and is now around 14 percent.

Let's take a look at the Indian ETF: 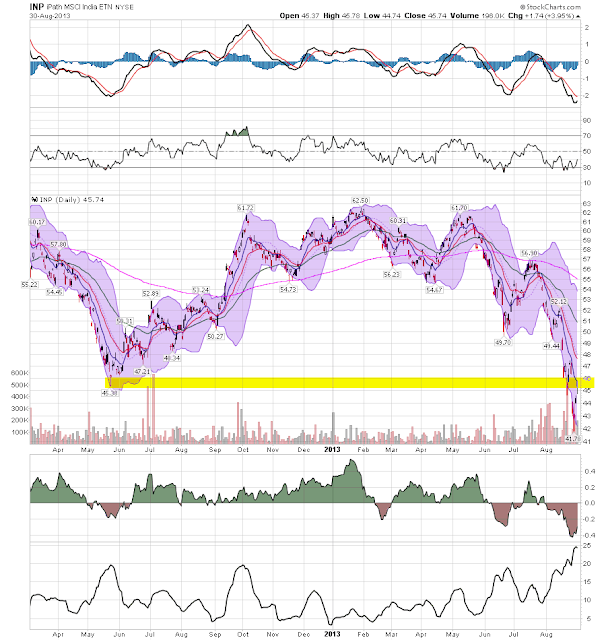 Indian prices are near their lowest level in over 1 1/2 years.  Prices started dropping hard in early May, falling through the 200 day EMA.  Since then, we've seen two attempted rallies that fell short.  Prices moved through the 45-46 level (a key technical support area) earlier this month.

The underlying technicals for this chart are very bearish.  Prices have dragged the shorter EMAs below the 200 day EMA, the MACD is negative and declining, the CMF is negative and volatility is increasing.