Let's start with a look at the economic news of last week.

The good: The Case Shiller home price index increased 10.8% Y/O/Y and 1.38% M/O/M.  Putting it bluntly, housing is making a comeback.  While this price increase has been the basis for claims of a new housing bubble, NDD and I demonstrated that prices are not out of control relative to DPI and that the increase in price is really a function of declining inventory (see here and here).

The second estimate of US GDP printed at 2.4% for 1Q13.  Here's the money quote from the report:

The increase in real GDP in the first quarter primarily reflected positive contributions from personal consumption expenditures (PCE), private inventory investment, residential fixed investment, nonresidential fixed investment, and exports that were partly offset by negative contributions from federal government spending and state and local government spending. Imports, which are a subtraction in the calculation of GDP, increased.

The Chicago PMI Increased from 49 to 58.7, a mammoth increase.  The internals for this report also increased at sharp rates.

And finally, "The Thomson Reuters/University of Michigan final index of sentiment increased to 84.5 in May, the strongest since July 2007, from 76.4 a month earlier. The median forecast in a Bloomberg survey called for the gauge to hold at its preliminary reading of 83.7."


The Bad: While the Richmond Fed did increase, it moved from -6 to -2, meaning this region is still in a mild contraction.  Unfortunately, most of the internals are still negative as well.  The Texas manufacturing index is also printing at a negative level, moving from -15.6 to -10.5.  However, the internals of this report are better, indicating stronger moved ahead are possible.

The worst piece of news came on the consumer front.

Given that we're in an environment when unemployment is over 7%, this is to be expected.  However, there is only so far or fast an economy that is 70% based on consumer spending can advance when it prints income and spending numbers like those printed this month.


Let's turn to the markets. 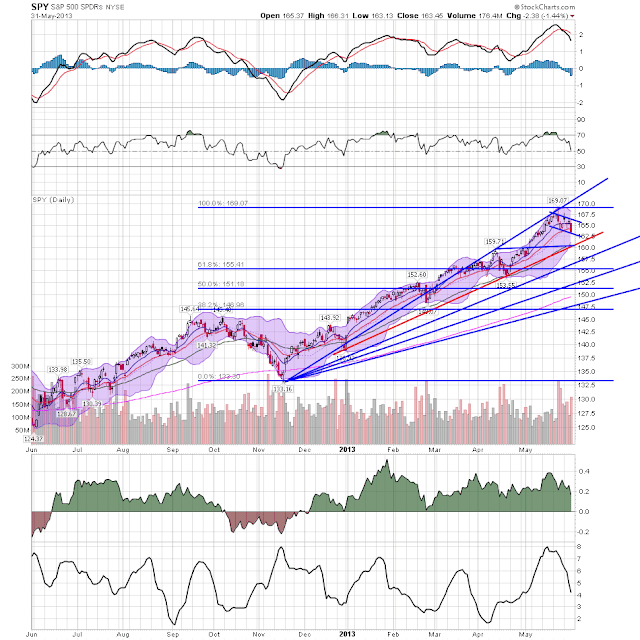 Despite all the hand-wringing regarding Friday's close, the chart shows prices are simply in a downward channel.  There are several logical price targets for this downtrend: 160 -- the price level established in mid-April, the red trend line connecting early January and mid-April lows and 155, which is a Fib level.  The high volume and MACD indicate more downward moves are probable. 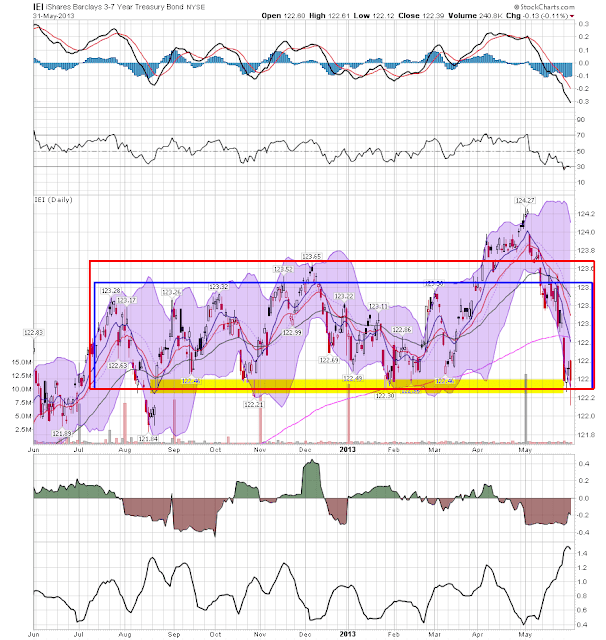 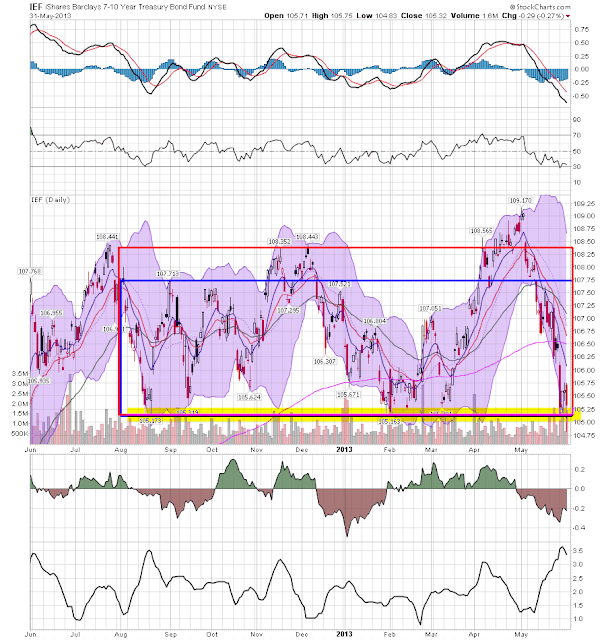 As I noted last week, the belly of the treasury curve is right at critical support.  The reason for the drop is investors and traders are now seriously considering the possibility of the Fed tapering off its bond buying program:

Treasuries recorded the steepest monthly loss since 2009 amid speculation the Federal Reserve could curtail its unprecedented monetary stimulus program if recent improvement in domestic economic data is sustainable.

U.S. government debt tumbled 1.8 percent in the month through May 30, the most since December 2009, according to Bank of America Merrill Lynch index data. Yields extended gains yesterday after a report showed consumer confidence rose in May to the highest level since 2007. A government report on June 7 is forecast to show the U.S. added 165,000 jobs in May and the unemployment rate remained at a four-year low of 7.5 percent. 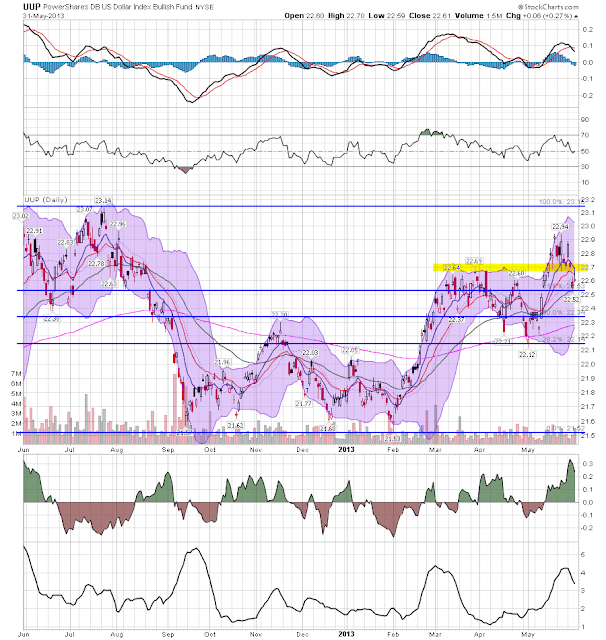 The dollar retreated last week, falling through the 22.6 level established in March and finding support at the 61.8% Fib level.  The 50 day EMA is also providing technical support.  Also note the selling signal given by the MACD.

The dollar is considered a safe haven currency.  As equity markets are still getting attention, it makes sense that we'll see the dollar sell-off a bit.
Posted by Unknown at 6:15:00 AM