Like it's BRICs cousin Brazil, India is facing some fairly heavy problems.  I last discussed the Indian economy in April and noted they were not looking very promising.  First, they are dealing with slower growth and higher inflation.  But structural problems are now coming to the surface.  First, their infrastructure is in terrible shape and is now biting into growth:


Of all the problems blamed for the slowdown over the past two years – recession in Europe, lack of skills in India, burdensome labour laws, port congestion, corruption and bureaucracy – the electricity shortage is now regarded by government and business alike as among the most serious.

“We used to think roads were the most important thing,” one government minister confided this week at a reception. “But it’s power, power, power.”

Economists who study the Indian economy – which has probably just overtaken Japan to become the world’s third largest measured by purchasing power parity, according to the Organisation for Economic Co-operation and Development – say that one of its peculiar weaknesses is the small size of its manufacturing sector.

And the government is struggling with questions about its overall legitimacy as allegations of corruption and graft continue:

Indian Prime Minister Manmohan Singh’s latest skirmish with corruption risks setting back efforts to spur growth, worsening a legislative logjam under a government set to pass the fewest bills ever in a full term.

Singh, 80, is grappling with renewed allegations that he has allowed corruption to fester after separate graft probes led to the May 10 dismissal of the law and railways ministers. Parliament ended two days early last week as opposition parties demanding the men’s resignation blocked proceedings, with proposals to open up the country’s pension and insurance industries to overseas investment still stalled.

Over the last four years, at least six ministers have resigned after being accused in corruption cases, with the opposition parties claiming this is the most graft-ridden government in India’s history.

Both of these factors -- along with the general global slowdown -- is leading to slower GDP growth.  From the latest GDP report:

News stories have noted that the combined effect of a weakened central government, high budget deficit and overall beaurocratic inefficiency are hindering growth:

“Growth is weak and I am skeptical about a sharp bounce-back anytime soon,” said Radhika Rao, an economist at DBS Bank Ltd. in Singapore. “The Reserve Bank of India will be cautious about retail inflation and the high current-account deficit.”

The central bank also believes the Indian economy is in weak shape:

On the domestic front, most Members were of the view that the overall demand situation is very weak. Industrial growth is subdued - new orders are expanding only modestly and instances have been reported where even after placing orders, clients are advising manufacturers not to deliver goods. Downgrading of companies by rating agencies has gone up by 30 per cent. The services sector is also weak and productivity in services and manufacturing sectors has been adversely affected, leading to supply constraints. The supply response is low, notwithstanding sizable unutilized capacity in the economy. Profit margins have been squeezed due to minimum wages rising with consequent wage pressures in the organized sector.

For a more detailed look, see this link from the central bank.

The latest Markit manufacturing and service report do paint a picture of an economy that is growing, albeit barely in the case of manufacturing.

Firs is the manufacturing report:

Operating conditions in the Indian manufacturing economy stagnated during May. The seasonally adjusted HSBC Purchasing Managers’ Index™ (PMI™) – an indicator derived from individual diffusion indices measuring changes in output, new orders, employment, suppliers’ delivery times and stocks of purchases – fell from 51.0 in April to 50.1 and was at a 50-month low.

Reflective of weaker gains in incoming new work and persistent power outages, output decreased in May, the first decline registered since March 2009. That said, production fell only slightly. Order book volumes rose for the fiftieth consecutive month. The rate of expansion was, however, marginal and the slowest in that sequence. Panellists suggested that demand was maintained, but commented on increased competition for new work and tough market conditions overall, particularly at home. Encouragingly, foreign orders rose at an accelerated pace during May. Growth in export business was solid and the fastest since January. Monitored companies indicated strengthening demand from key export clients. Meanwhile, unfinished business levels increased, amid evidence of power and water shortages. Backlogs of work rose solidly and at the quickest pace in five months.

And then there is the services report, which was more bullish:

The seasonally adjusted HSBC Services Business Activity Index posted 53.6 in May, up from 50.7, pointing to a solid expansion in output, one that was the fastest in three months. This contrasted with a fall registered in manufacturing output, the first decline in 50 months.  May data pointed to higher levels of new work placed at private sector firms in India. The rate of expansion was moderate and little-changed from April. Service providers stated that demand was stronger and new products were launched. Manufacturers reported weaker gains in incoming new work, tough market conditions and increased competition.

Let's turn to the charts of the Indian ETF 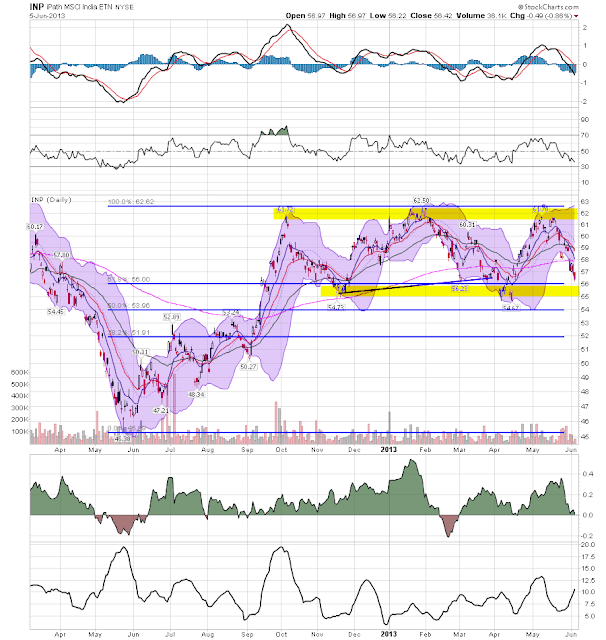 The ETF is still trading between the 55 and 62 lever.  Momentum is fluctuating and prices are using the 200 day EMA line as technical support.

The main issue for the market is when will it break out of its range and what direction will it move in?