The latest seasonally adjusted Australian Industry Group Australian Performance of Manufacturing Index (Australian PMI®) rose 7.1 points to 43.8 in May. It recovered much of April’s sharp decline, to be broadly in line with the average (negative) level seen over the past year.

■ This marks the 23rd consecutive month of contraction in the sector (with 50 points marking the separation between expansion and contraction). Interest rate cuts by the RBA over the past year appear to have had little impact on activity levels thus far.

■ The capacity utilisation rate is now below 70%, which is only just above the levels recorded during the GFC. And although still registering expansion (readings above 50 points), the input prices and wages growth sub-indexes fell to their lowest levels since June 2009. 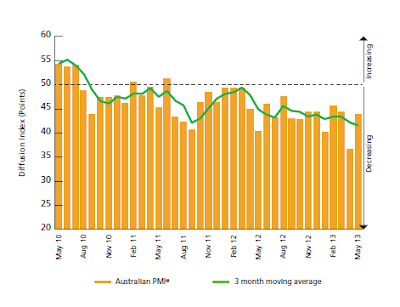 There are several points to note from the above report.

First, the sector is in a long-term contraction that is almost two years long.  More importantly, the standard method used by central banks to encourage growth (a drop in interest rates) is not having an effect.  This tells us that cost of capital is not an issue; instead, the problem is deeper.

The number of "impediments" listed in the report is very broad and can't be easily dismissed or cured.  Also remember that the Australian economy is part of the "south-south" trade -- the southern hemisphere pattern of raw material exporters supply China's manufacturing engine.