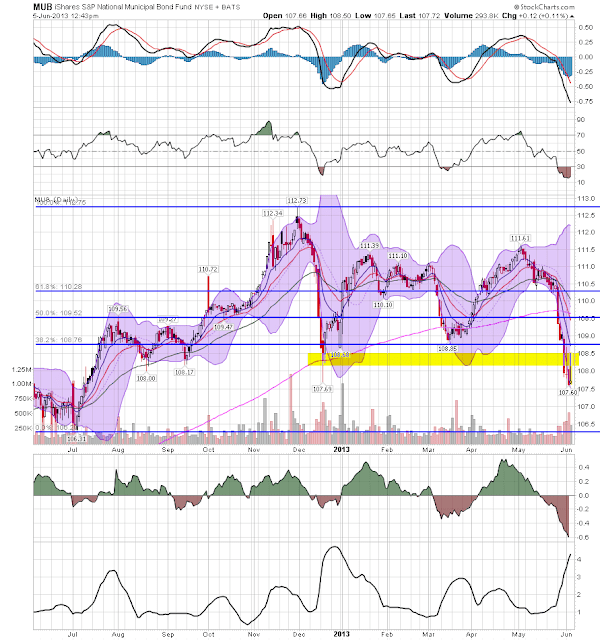 Mortgage backed bonds have dropped below key support at the 108 price level.  Other parts of the chart add to the bearish interpretation.  Prices are below the 100 day EMA with the smaller EMAs moving lower.  The 10 and 20 day EMA have moved through the 20 day EMA and momentum is negative.

The Financial Times outlines the the potential problems:

The change could affect the US economy in two ways: by making new loans less affordable, it could damp the recent recovery in house prices; and it could reduce the number of Americans refinancing into cheaper mortgages, eliminating savings that have boosted consumer spending.

Keith Gumbinger, vice-president of mortgage research company HSH, said: “The rise in the rate is enough to slow down the refinancing market, as even a small bump up in rates can put homeowners on the fence.”
Refinancing applications had already begun to decrease, falling 12 per cent in the week to May 24 according to the Mortgage Bankers’ Association – the largest single-week drop this year and back to their lowest level since December 2012.

However, other analysis disagrees.  This is from Wonkblog, citing Goldman research:

It also shows an initial reason for some optimism. At a 30-year fixed-rate mortgage rate of about 3.8 percent, the typical American homebuyer can afford a $279,000 house. That’s 45 percent more than the current price of houses. That suggests that affordability isn’t the thing holding Americans back from buying houses (instead, it may be such factors as tight credit standards, difficulty building up a down payment  or lack of confidence in future job prospects). It also implies that slight increases in the mortgage rate shouldn’t completely undermine the improvement in the housing market; the thing to watch is not rates per se, but what happens on those other factors that are drags on would-be homeowners.

And that bodes particularly well:  As we wrote last week, the rise in rates over the past month appears to be driven primarily by improving economic prospects. If that’s the case, even as homes become a bit more expensive, they will be doing so at the same time those other restraining factors dissipate. So rising mortgage rates, if they’re rising for good reasons, could actually be net positives for the housing market if they result from more people having jobs and being confident in their prospects.