The Australian Central Bank kept rates at 2.75% in their latest policy announcement:

At its meeting today, the Board decided to leave the cash rate unchanged at 2.75 per cent.

In Australia, growth over the past year has been a bit below trend. The outlook published by the Bank last month is for a similar performance in the near term and recent data are consistent with this. The unemployment rate has edged higher over the past year and growth in labour costs has moderated. Inflation has been consistent with the medium-term target and is expected to remain so over the next one to two years.

The easing in monetary policy over the past 18 months has supported interest-sensitive areas of spending and has been reflected in portfolio shifts by savers and higher asset values. Further effects can be expected over time. The pace of borrowing has thus far remained relatively subdued, though recently there have been some signs of increased demand for finance by households. The exchange rate has depreciated since the previous Board meeting, although, as the Board has noted for some time, it remains high considering the decline in export prices that has taken place over the past year and a half.

I'm bearish on Australia and the above comments don't change my mind.  Growth is slowing a bit.  My guess is the central bank is keeping their powder dry in the event they need to add further fuel to the fire.

Let's take a look at the relevant ETFs while we're here. 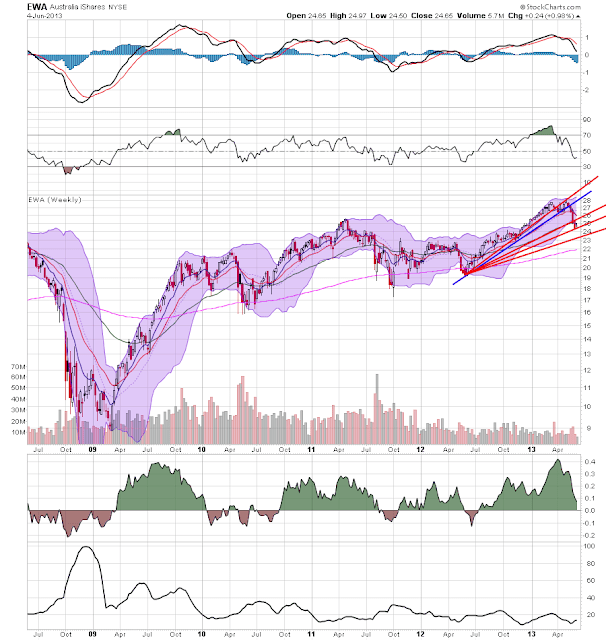 There are three important developments on the weekly chart.  First, prices have broken the trend of the rally started in the spring of 2012.  Since this break, prices have fallen to a Fib fan level for technical support.  Most importantly, the weekly MACD has given a sell signal. 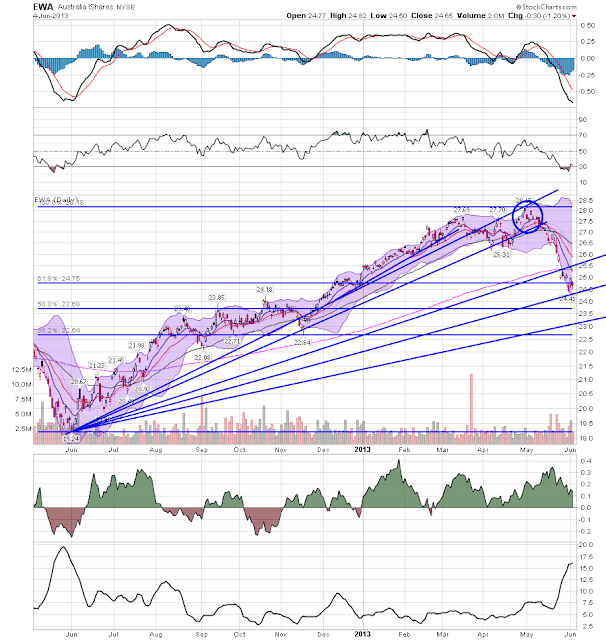 The daily chart shows the the exact same developments, but adds the further issue of prices now being below the 200 day EMA,