I've previous noted that Brazil faces the most unwanted dilemma of slower growth and higher inflation (see here and here).  It is not an economy or market that I would invest in right now; on April 18th I noted:

This rate increase has signaled to the market that Brazil has some fairly deep problems that need to be dealt with.  I wouldn't go long here until we get a far clearer read on inflation.

Unfortunately, the outlook has not improved since my last writing.   The biggest problem is that the old model of growth no longer works while the new model is lacking.  The recent departure of a high level government official highlighted the challenges.

The departure of Mr Barbosa will fuel concerns over the direction being taken by Dilma Rousseff, Brazil’s technocratic president. The so-called Lula model championed by Ms Rousseff’s predecessor and mentor, former president Luiz Inácio Lula da Silva, which generated fast growth by pumping up demand with wage rises and social welfare benefits, finally stuttered to a halt in 2011 after eight years.

Investors had pinned their hopes on the “Dilma model” – centralised, planned reform by a trained economist with an authoritative “chief executive-like” style, the opposite of the folksy charm of Mr Lula da Silva, who never completed primary school.

But critics say the result so far has been slow economic growth, excessive government intervention and ever-increasing public expenditure.

Moving on the current economic statistics, the central bank continues to raise rates to combat inflation:

Brazil's central bank raised its benchmark Selic rate by 50 basis points to 8.0 percent to help bring down inflation and "ensure that this trend will continue next year."

In a brief statement, the Central Bank of Brazil said its policy committee, known as Copom, had agreed on the rate rise unanimously and it did not issue a bias about the future trend of policy.

It is the second consecutive rate rise by Brazil's central bank following a 25 basis point rise in April, bringing this year's total rate increase to 75 basis points. In 2012 the central bank cut rates by 375 basis points in response to declining economic growth before freezing rates from November through March.

Today's rate rise was largely expected and follows recent warnings by the central bank's governor that he would do "what is needed, in a timely manner, to ensure inflation declines."

Obtaining inflation-fighting credibility is incredibly difficult for a central bank.  And once lost, it is very difficult to obtain again.  Compounding the problem for Brazil is they have a history of hyper-inflation.  As a result, the bank probably feels compelled at this point to raise rates, especially when faced with the following inflation situation:

Moving onto economic fundamentals, the recent central bank minutes highlight some of the central negative trends the bank is facing:

The Economic Activity Index of the BCB (IBC-Br) incorporates estimates for the monthly production of the three sectors of the economy, as well as for taxes on products, and constitutes important coincident indicator of economic activity. Considering seasonally adjusted data, the IBC-Br retreated by 0.5% in February, after increasing by 1.4% in January. Year-over-year, the economy grew 3.8% in January and 0.4% in February, with twelve-month trailing growth moving from 0.8% in January to 0.9% in February. The Consumer Confidence Index (ICC), from the Getúlio Vargas Foundation (FGV), retreated for the sixth consecutive month in March, considering seasonally adjusted data. On its turn, the Services Sector Confidence Index (ICS) increased in March, reflecting the improvement in the perception of the current situation. The industrial businessmen confidence, measured by the Industry Confidence Index (ICI), retreated in March, after three consecutive months of elevation. Regarding agriculture, the Agricultural Production Systematic Assessment, carried out by the IBGE, indicates that grains production should grow by 12.0% in 2013, relative to the 2012 harvest.

Manufacturing activity retreated 2.5% in February, after a 2.6% increase in January, according to the general industrial production series seasonally adjusted by the IBGE. Production decreased in 15 of the 27 branches of activity. Thus, the production grew 0.3% in the quarter ended in February, quarter-over-quarter. On its turn, industrial production accumulated in the last twelve months changed from -2.0% in January to -1.9% in February. According to data released by the National Confederation of Industry (CNI), real revenue in themanufacturing industry increased 0.5% in February, compared to the same month of the previous year, and the number of worked hours decreased 0.9%.

While the economy is hardly in the throes of a cataclysmic slowdown, there are clearly major issues facing the country.  The biggest is the decline in the "south-south" trade, or trade between raw material exporters (primarily in Latin America and Oceania) in the southern hemisphere and China. As Chinese growth slows and as China changes its economic model from one of exporting to the developing world to one based more on consumption, countries that have exported to China will see their respective GDP take a hit.  And Brazil is a case in point of the latter:

In relation to the fourth quarter of 2012, the GDP (Gross Domestic Product) at market prices posted a positive change of 0.6%, in the seasonally adjusted series.  The greatest highlight was agriculture, advancing 9.7%. Services grew 0.5%, whereas the industry fell 0.3%. In the comparison with the same period of 2012, there was a 1.9% increase in the GDP in the first quarter of the year. In the cumulative index of the four quarters ended in the second quarter of 2013, the GDP presented a growth of 1.2% in relation to the prior four quarters.  At current values, the GDP at market prices reached R$ 1,110.4 billion, of which R$ 940.4 billion were relative to the Value Added (VA) at basic prices and R$ 170.0 billion, to Taxes Less Subsidies on Products.

Placing this information in the year over year context, we get the following chart:

The pace of growth has clearly slowed over the last 6-8 quarters.

Let's turn to the Brazilian ETF, the EWZ: 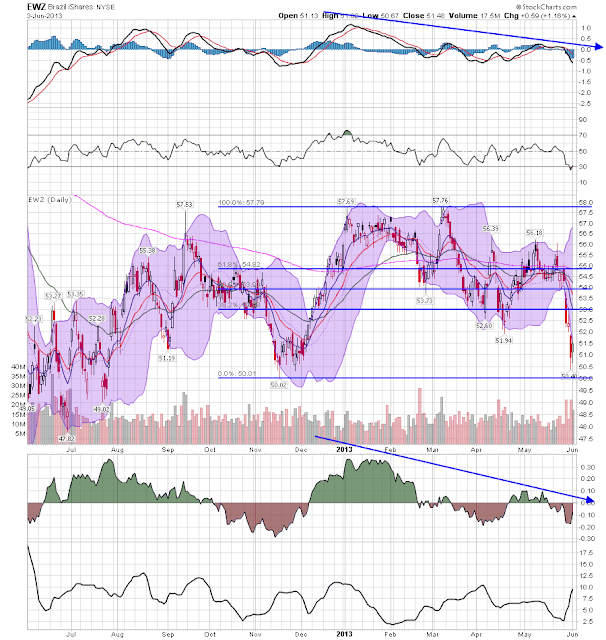 Since the end of September 2012, the ETF has been trading between the 50 and 57.5 price level.  However, since the beginning of this year, there has been a slight downward trend to the candles.  This has been accompanied by a continual move lower in the MACD and CMF.  Prices are caught at the 200 day EMA since May.  But since the release of the GDP information, prices have dropped lower, printing several long bars on higher volume.