For reasons unknown, John Hinderaker thinks he has the ability to provide meaningful economic analysis when in fact the exact opposite is the case.  In the time that I've been reading his blog (over 8 years now) he has yet to get even the most basic economic concept right.

His latest demonstration of economic ignorance is his piece, Manufacturing Drops -- unexpectedly.  After citing to a Bloomberg news article, he concludes the following:

America’s slow-to-nonexistent economic growth, of which today’s manufacturing data are one of many symptoms, is the result of bad government policies: out-of-control regulations, excessive and inefficient government spending, rising tax rates and the impending disaster of Obamacare, to name the most obvious ones. Until observers are willing to acknowledge the extent to which poor government drags down the economy, they will continue to be surprised by unexpected bad news.

First, let's look at the actual report to see what it actually says.

The report was issued today by Bradley J. Holcomb, CPSM, CPSD, chair of the Institute for Supply Management™ Manufacturing Business Survey Committee. "The PMI™ registered 49 percent, a decrease of 1.7 percentage points from April's reading of 50.7 percent, indicating contraction in manufacturing for the first time since November 2012 and only the second time since July 2009. This month's PMI™ reading is at its lowest level since June 2009, when it registered 45.8 percent. The New Orders Index decreased in May by 3.5 percentage points to 48.8 percent, and the Production Index decreased by 4.9 percentage points to 48.6 percent. The Employment Index registered 50.1 percent, a slight decrease of 0.1 percentage point compared to April's reading of 50.2 percent. The Prices Index registered 49.5 percent, decreasing 0.5 percentage point from April, indicating that overall raw materials prices decreased from last month. Several comments from the panel indicate a flattening or softening in demand due to a sluggish economy, both domestically and globally."

For anyone who reads these reports regularly, the opening paragraph is the standard ISM report opening paragraph providing an overview of the numbers therein.  The internals are moving lower, and most are printing in the "just negative" category. Notice the emboldened sentence at the end: sluggish global demand may be playing a factor.

Here's a chart of the overall data from the St. Louis FRED system: 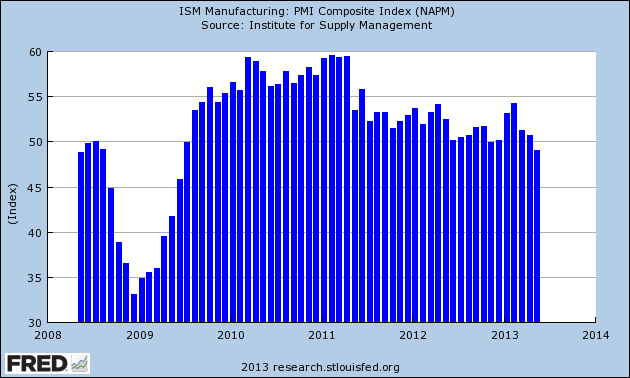 For the last 12-13 months, the data has been printing right above the 50 level, indicating an economic expansion.  So, yes, the data has for one month moved into negative territory.

Let's look to the causes listed in the report's anecdotal comments section:
First, Hinderaker claims "inefficient government spending" is a cause of the ISM slowdown.  But the anecdotal comments say the exact opposite, instead citing a tightening in government spending as a reason for the slowdown.  The last GDP report made the exact same observation: [t]he increase in real GDP in the first quarter primarily reflected positive contributions from personal consumption expenditures (PCE), private inventory investment, residential fixed investment, nonresidential fixed investment, and exports that were partly offset by negative contributions from federal government spending and state and local government spending.   So a simple reading a few economic reports would have disabused Mr. Hinderaker of this contention. This is not analysis, but instead reading comprehension.

As for this spending being excessive, I've already demonstrated that Federal spending has in fact stalled -- see the chart in this article.  This information is confirmed by the BEA's latest GDP data.  In fact, federal spending is slowing to the point of making a meaningful dent in the budget deficit -- the development of which is conspicuously absent from Mr. Hinderaker's blog despite his protestation to being a fiscal hawk.

Also note the reference in the ISM report to a slowing global economy.  As readers of this blog know, the Chinese re-balancing and the EU depression are having ripple effects throughout the world economy.  As US manufacturing supplies both regions, simple logic would indicate these slowdowns are impacting US manufacturing.  Yet Mr. Hinderaker makes no mention of this widely known development in his "analysis."

As for the rising tax rates crushing growth, nothing could be further from the truth.  Here's a chart of total tax revenues as a percent of GDP, drawn from data provided by the CBO: 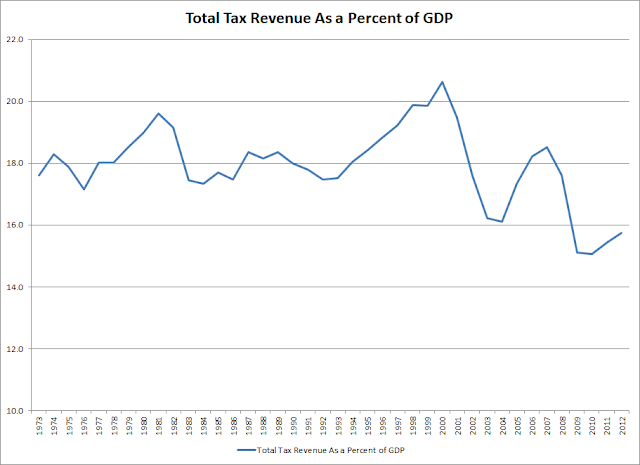 The data indicates that tax rates are among the lowest of the last 50 years.

Obviously unbeknownst to Mr. Hinderaker, the US is experiencing a post debt-deflation recovery.  It is also referred to as a balance sheet recession.  This was first outlined by Irving Fisher in the early 1930s (see the first post).  After an economy builds up too much debt, a slowdown forces liquidation.  This leads to the selling of assets, lowering prices, leading to the calling of more loans and a general slowdown of economic activity.  See also Japan for the last 20 years.  This is the reason for the slow growth.  This is the reason for the slow growth.  Anyone who actually reads economic history would know this.

Hinderaker is a political wind-up doll: pull his string and he regurgitates the standard conservative party line.  He performs no analysis and and is remarkably devoid of meaningful economic insights.  His sole purpose is to continue particular themes, facts be damned.  And, as the facts demonstrate, he's again 100% wrong in his analysis.