Market Analysis: Australia -- Are We At A Short-Term Peak?

Consider the following from the latest Conference Board's LEIs of Australia:

The Conference Board LEI for Australia increased slightly in January after declining in the previous two months. Stock prices and money supply made the largest positive contributions to the index this month. Despite the small gain in January, the leading economic index continued on a downward trend, falling 1.0 percent (about a -1.9 percent annual rate) between July 2012 and January 2013, slightly steeper than the decrease of 0.8 percent (about a -1.6 percent annual rate) during the previous six months. Moreover, the weaknesses among the leading indicators have remained more widespread than the strengths in recent months.

Let's look in detail at the numbers: 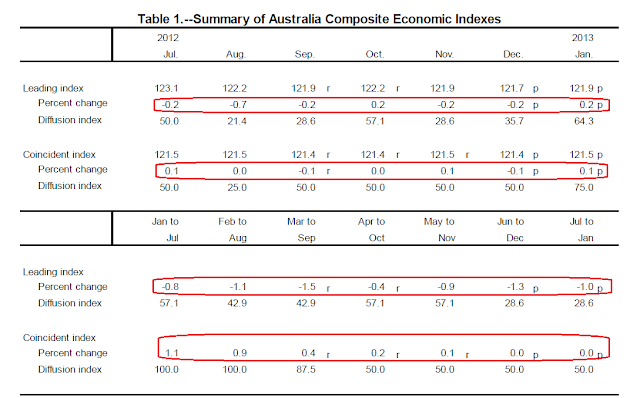 Looking at the trend, first notice how the LEIs have printed 5 negative months over the last 7.  And the month to month increases aren't that strong.   In addition, the 6 month percentage change numbers have all been negative for the last 7 readings.  Finally, notice that the coincident indicators are have been decreasing from 1.1 in the January to July period to 0.0% over the last two six month periods. 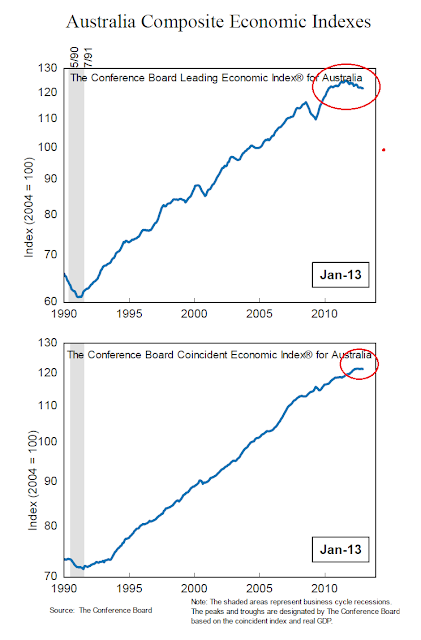 The LEIs have been decreasing and the conincident indicators are leveling off.

In addition, let's take a look at the latest Minutes from the Central Bank of Australia's last meeting:

With the national accounts scheduled for release the day after the Board meeting, members noted that information to hand at the meeting suggested that the pace of output growth in the December quarter had been around trend. Coal and iron ore exports had grown strongly in the quarter, and most components of domestic demand were estimated to have recorded moderate growth.

While mining investment was reported to have grown further in the December quarter, it still appeared that mining investment as a share of GDP was approaching its peak and mining firms remained focused on containing costs. The gradual shift away from investment towards production and exports in the period ahead was expected to lead to some reduction in the demand for labour in the resources sector.

Investment outside the mining sector was estimated to have declined in the December quarter. However, there were indications that it would pick up in 2013/14, although this was expected to be modest, as business surveys of investment intentions and capacity utilisation were at below-average levels and liaison suggested that some firms were investing only to cover depreciation. Consistent with this, non-residential building approvals remained low and office vacancy rates had risen over recent quarters, reflecting softening demand for office space. Members noted that business profits had declined a little and business debt had been growing at a moderate pace of about 4 per cent per annum.


Members observed that dwelling construction activity had picked up further in the December quarter. Forward-looking indicators such as building approvals pointed to further growth in construction in the months ahead. The increase in approvals had been geographically widespread and the Bank's liaison with builders also suggested there had been an improvement in buyer interest in some states. Overall, recent housing market developments pointed to a further moderate increase in dwelling construction in the period ahead.


Indicators of consumption had been mixed but, overall, growth appeared to have been only modest in the December quarter. The value of retail spending was unchanged over the December quarter, although figures released during the meeting indicated that spending had increased in January, which was consistent with liaison contacts reporting stronger retail spending in early 2013. Motor vehicle sales to households were flat in February but remained at a robust level, while measures of consumer sentiment had increased further over recent months, to be a bit above their long-run average levels.


Members noted that conditions in the labour market remained subdued. The unemployment rate in January was steady at 5.4 per cent, but the rate of growth of employment remained modest, the trend in total hours worked remained flat and the participation rate had declined a little further. While leading indicators of labour demand were down from earlier levels, they remained consistent with modest employment growth in the near term.


As expected, the year-ended pace of wage growth continued to slow, with the wage price index increasing by 3.4 per cent over the year to the December quarter. This slowing had been broad-based across states and industries, and was particularly pronounced in the household services and retail sectors. Information from liaison and business surveys was consistent with private sector wage growth on a quarterly basis remaining around current rates over the period ahead.

Overall, there's growth, but it's slowing.  Outside of replacing goods to cover for depreciation, business investment is down.  Non-residential investment is declining.  While retail sales are OK, they're not robust.  Most importantly, there is a potential slowing of the labor market: job growth is lackluster; total hours worked was lackluster and the participation rate had declined.

And then there is this analysis from their latest interest rate decision announcement:

In Australia, growth was close to trend over 2012, led by very large increases in capital spending in the resources sector, while some other sectors experienced weaker conditions. Looking ahead, the peak in resource investment is drawing close. There will, therefore, be more scope for some other areas of demand to strengthen.

Recent information suggests that moderate growth in private consumption spending is occurring, though a return to the very strong growth of some years ago is unlikely. While the near-term outlook for investment outside the resources sector is relatively subdued, a modest increase is likely to begin over the next year. Dwelling investment is slowly increasing, with rising dwelling prices and high rental yields. Exports of natural resources are strengthening. Public spending, in contrast, is forecast to be constrained.

And finally, there is this article from the Financial Times regarding Australia's need to re-balance it's economy.

Let's take this data and apply it to the Australian ETF: 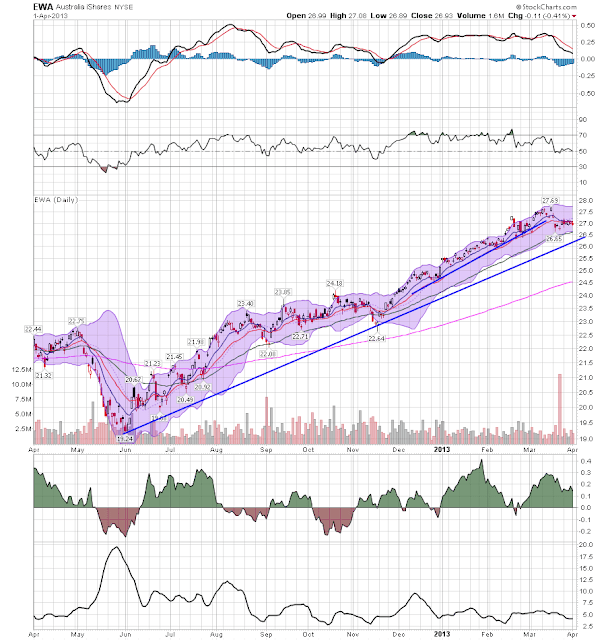 On the daily chart, we see two trend lines.  The one that started in mid-November has clearly been broken.   However, the one that started in last June is still good.  Prices are tangled in the 10 and 20 day EMA -- both of which are also moving sideways.  The 50 day EMA looks like it will be the next technical support level.  Additionally, momentum is dropping and prices are losing their overall strength.  However, there is still a fair amount of money moving into the market. 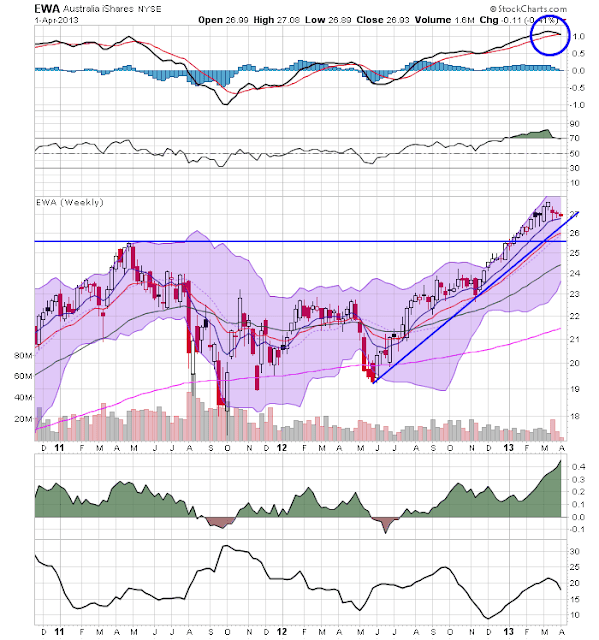 The weekly chart shows that prices are forming a downward triangle on decreasing momentum on declining volume.  There are two ways to read this. The bullish read is that the triangle represents a downward consolidation of the ETF.  However, consider that interpretation in light of the weakening LEI picture.  When the fundamental information is read into the data, this is looking more and more like a temporary top.