This is another update on how technology, conservation, and new sources of energy finally seem to be loosening oil's choke hold on the US economy this year. Last week I pointed out the obvious, that gas prices are actually lower than they were a year ago this year, especially as a share of wages earned by average Americans. Earlier this week I noted the substantial increase in sales of hybrid vehicles and more energy-efficient vehicles, as well as the greatly increased US crude oil production.

That isn't all that is happening. According to the American Mass Transit Association, the use of mass transit keeps on increasing:

Further, ridership continued to increase in 2012 to a near record. But for the impact of Sandy on the NYC-NJ area, which knocked back usage of mass transit in the biggest metropolitan area in the cournty last autumn, a new record would indeed have been set.

Mass transit ridership increased nationwide last year, according to new numbers Monday, an indication that more people are going back to work and high gasoline prices are changing how they get there..... [despite the fact that] declines in the state, local and federal tax revenues that support transit systems have forced many of them to cut back service.

.... U.S. transit systems recorded 10.5 billion trips last year, the second-highest level since 1957. The numbers would have been even higher if Superstorm Sandy on Oct. 29 hadn't crippled transit systems throughout the Northeast.

...[V]olatile gasoline prices have driven many commuters to seek alternatives. "People have found transit to be a good value," said Michael Melaniphy, the president and chief executive of the American Public Transportation Association.

Americans' use of more efficient means of transport has caused the long-term trend in gasoline usage to continue to decline. Here is the graph from 1991 to the present from the E.I.A. (I truncated the graph to allow it to fit better. The second line from the top represents 10m barrels a day, the third line 7.5m): 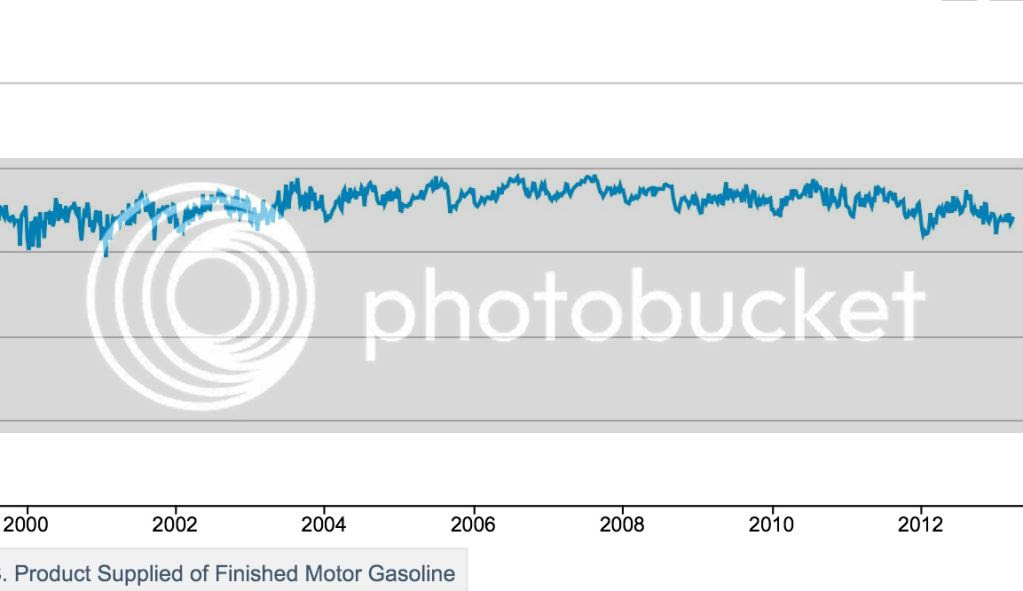 Although the economy has been growing for almost 4 years, and employment for 3 years, gasoline usage has generally continued to decline on a YoY basis. Gas usage is down where it was in the 2000-2002 time frame, even though there are about 6 million more commuters going to work.