This is a follow-up on my post last week in which I noted that the Oil choke collar appears to be loosening. Two years ago, when I said I thought it might begin to loosen in about 2013, I wrote that 3 trends would gradually converge. Those were:

There has been significant progress in all 3 areas. Here are examples of alternative fuels and technology, and exploration.

Sales of hybrid-powered cars have made new highs:

At Southeast Toyota Distributors, which supplies new Toyotas to Florida and four nearby states, gas-electric hybrids accounted for 14 percent of sales last year, up from 8 percent in 2011.

.... All those factors converged to make hybrid and electric cars the fastest growing segment in the U.S. vehicle market last year, up 73 percent – from a small base. And hybrid and electric car sales should grow at least 20 percent this year to exceed 535,000 units sold, auto analyst firm Mintel has forecast.

Hybrids still represent just a tiny share of the U.S. vehicle market – roughly 3 percent last year. But growth is so strong that Toyota expects Prius to overtake Camry as its top-seller in the United States within a decade. Already, Pruis ranks as Toyota's No. 1 seller in California, the top hybrid market.

Not only are hybrid vehicles increasing their share of the auto market, but US vehicle fleet efficiency is improving rapidly:

The fuel efficiency of the nation's cars and trucks in the 2011 model year fell to 22.4 mpg, down from 22.6 mpg, as Japanese automakers produced fewer fuel-efficient vehicles because of natural disasters.

However, the Environmental Protection Agency predicted in a report released Friday that the 2012 U.S. vehicle fleet's fuel efficiency will jump to 23.8 mpg, in part because Americans are buying more fuel-efficient cars because of higher gasoline prices.

The estimated 2012 fleetwide average would be the highest since Congress created the fuel efficiency standards in 1975 and ordered the fleet mileage to double over 10 years. The EPA says since 2007, fuel efficiency has jumped 13 percent.

Next, turning to the results of exploration, here is a graph showing the production of crude oil in the US (h/t Scott Grannis: 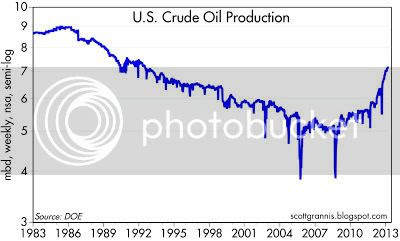 These are just samples of what is happening to loosen the Oil choke collar. I haven't touched on foreign exploration or conservation at all. The point is, while there is no single "silver bullet," a variety of trends are slowly working to loosen the choke hold that gas prices have had on the US economy.