Colombia has seen a slowdown in GDP growth the last two quarters.  This led to the Colombian Central Bank lowering interest rates 50 basis points at their last meeting.  Here was their reasoning:


• Colombia’s trading partners are likely to grow less than expected. If this provides to be the case, the contribution to the country’s economic growth stemming from external demand would remain low.  Moreover, if the trend observed in prices for Colombia’s major exports continues, terms of trade would average less in 2013 than they did last year. Consequently, aggregate spending in 2013 would see no additional boost from an increase in national revenue.

• The new data on economic growth in 2012 (4%) show a slowdown from the high levels witnessed in 2011 (6.6%). The major loss in momentum came during the second half of the year and was explained largely by a significant reduction in investment growth. The rise in private consumption slowed during 2012, reaching rates similar to its historical average. The increase in exports also declined compared to 2011, with a significant drop during the fourth quarter.
.....
• As for the first quarter of 2013, the deterioration in trade expectations and the drop in the consumer confidence index and auto sales suggest less momentum in private consumption.  The value of exports in dollars during January was similar to the figure posted a year earlier, and industrial exports saw positive annual growth. However, indicators of business confidence suggest industry continues to contract. This momentum denotes current economic growth below potential and, hence, an increase of the shortcomings with respect to use of industrial productive capacity.

• The decline in annual inflation from 2.0% in January to 1.8% in February was similar to what the technical team predicted. This slowdown is explained largely by the reduced rate at which food prices increased, mainly those for processed foods. All measurements of core inflation declined as well.  The average for these measurements is below the target (3%), as are inflation expectations. The recent decline in international prices for energy and other commodities means less pressure on domestic inflation.

Put more generally, GDP growth has slowed.  And the slowdown has been seen across all GDP accounts: personal consumption, investment and exports.   That's not the kind of data that warms a central bankers heart.  In fact, it does just the opposite.  The one good piece of data was the dropping of the inflation rate, which gave the bank the room to lower rates.

Let's place all of this information into a market context: 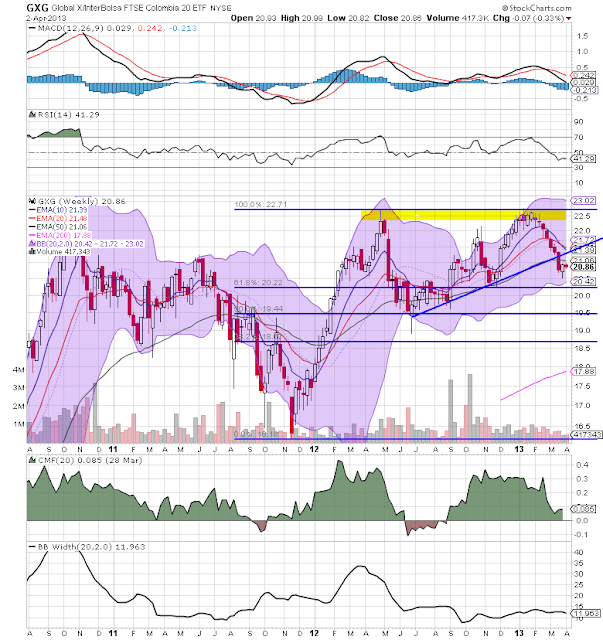 On the weekly chart, we see that prices recently hit multi-year highs at the 22.5 level -- where they rose to in mid-2012.  Prices dropped after their first visit to this level, probably in reaction to the EU situation.  Prices then dropped to the 50% Fib level from the late 2011-mid-2012 rally.  They moved higher after that, hitting the 22.5% peak again at the beginning of this year.  But prices have been falling since then as the economy overall has slowed. 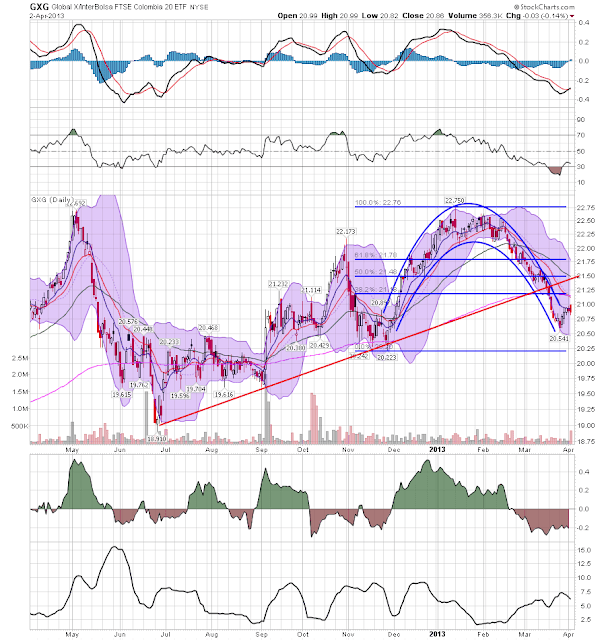 The daily chart shows that for the last five months, prices have made a near-perfect arc.  However, since cresting after the first of the year, prices have continually moved lower, broaching both the upward trend line started last summer and the 200 day EMA.  Also note the declining MACD and negative CMF reading.

The recent action by the central bank has probably stopped the market bleeding for now.  However, there isn't much room for rallying optimism right now.
Posted by Unknown at 6:00:00 AM