Consider the following from Agrimoney:


Corn futures plunged the exchange limit in Chicago, with soybean and wheat prices falling too, after the US said that its stocks of all three crops were larger than had been thought, easing concerns over tight supplies.
The US Department of Agriculture added to ideas of an easing in the corn supply squeeze by pegging domestic sowings of the grain at 97.3m acres, a little above market expectations, and the largest area since 1936.
The USDA said that US corn inventories as of the beginning of the month had fallen to 5.40bn bushels, down some 600m bushels year on year, but well above the figure that investors had expected following last year's drought-hit harvest.
Also note the following:
Hedge funds have been badly burned by the continuing slump in grain and oilseed futures prompted by US crop inventory data, having bet on the stocks statistics sparking a surge in prices.
Managed money, a proxy for speculators, raised their net long position in Chicago corn futures and options to more than 192,000 lots in the week to last Tuesday, according to data from the US Commodity Futures Trading Commission.
And finally there is this from Bloomberg:
Corn plunged the most in 24 years, entering a bear market, as bigger-than-expected U.S. stockpiles and increased planting signal ample supplies. Wheat tumbled to a nine-month low and soybeans dropped.
U.S. corn inventories on March 1 totaled 5.399 billion bushels, the Department of Agriculture said March 28. While down from a year earlier, that’s still above the 4.995 billion forecast by analysts surveyed by Bloomberg News. Farmers will plant 97.282 million acres this year, the most since 1936, the USDA said. Prices reached the lowest since June today.

“The market expected a bullish report last week and got the opposite,” Dave Marshall, a farm marketing adviser at Toay Commodity Futures Group LLC in Nashville, Illinois, said in a telephone interview. “Today we’re just seeing follow-through selling from being caught on the wrong side of the market.”

Let's place this into historical context: 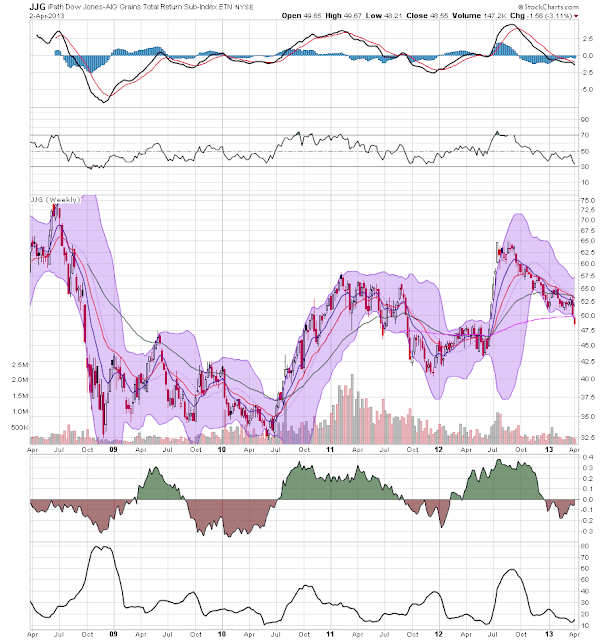 On the weekly chart of the grains ETF, we see three price spikes.  The first occurred in 2008, the second occurred in 2011 and the third occurred last year.  Weather related incidents were a primary cause of all three, along with a growing world population that wanted a better diet. 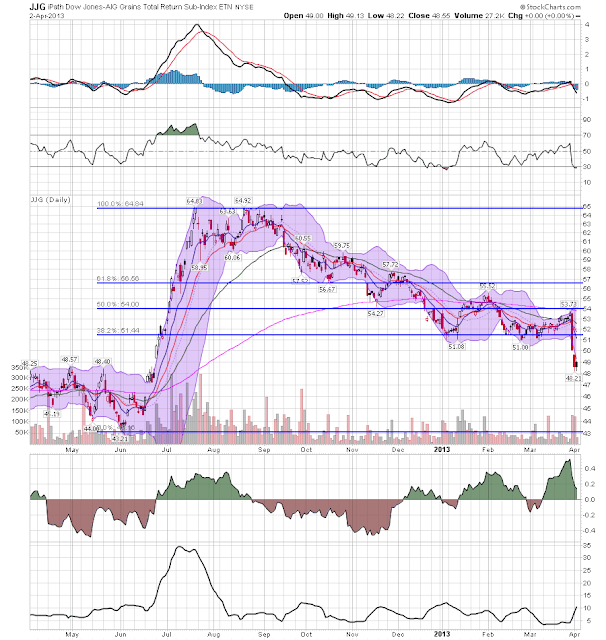 Looking at more recent price action we see last year's price spike along with prices selling off to the 50% Fib level from last summer to the end of last year.  Since then prices have been relatively stable, more or less moving sideways between the 51.5 and 55 level.  While momentum has been negative for the last six months, note we see several CMF peaks, telling us that traders were putting money into the market.

Over the last few days, we see the big drop in prices caused by the USDA's recent drop report. Part of the reason for the big drop is a fair number of hedge funds making bullish bets (making the assumption that we'd see another round of massive price spikes this spring from weather related issues) getting hammered by the report from the USDA.  Part of the reason for the drop is -- as stated above -- the general tenor of the market was bullish which the latest report completely crushed.

At the same time, remember this chart of the drought in the US: 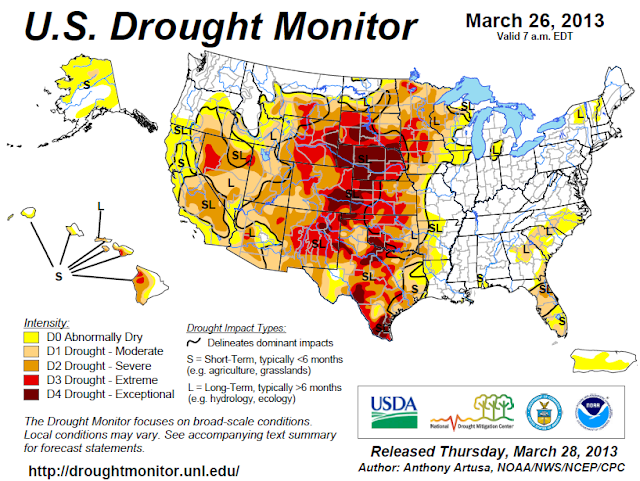 We're not out of the woods yet by any stretch of the imagination.