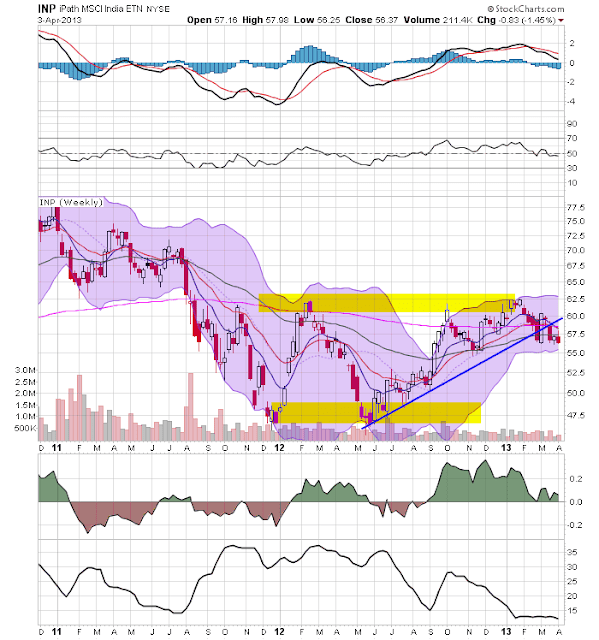 The weekly Indian ETF chart shows that for the last year, prices have been trading in a range between roughly 47.5 and 62.5 -- a range of about 30%.  Most importantly, the rally chart started last May has been broken; prices are slow below the 200 week EMA on declining momentum and lowering participation. 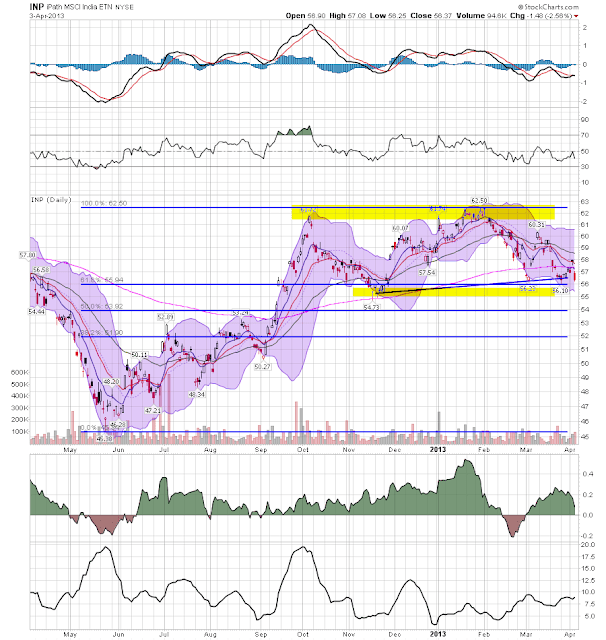 On the daily chart, we see that prices have recently been trading between the 56 and 62.5 levels.  However, technically we see a declining MACD and weakening CMF.  Also note that prices are just below the 200 day EMA on this chart as well.

I've been bearish on India this year (see here, here and here).

Overall, in the links above we see some fairly entrenched problems such as extreme policy uncertainly, inflation, lowered growth, and large budgetary and current account deficits.

The latest Markit Manufacturing report is good, but there are underlying concerns:

Indian manufacturing business conditions continued to improve in March, but persistent powercuts weighed on growth. Moreover, the volume of incoming new work increased moderately and at the slowest pace in 16 months. Export orders expanded slightly, with the rate of growth easing to the slowest in seven months.

The seasonally adjusted HSBC Purchasing ManagersIndex™ (PMI™) – a composite indicator designed to give a single-figure snapshot of operating conditions in the manufacturing economy – posted 52.0 in March (down from 54.2 in February), indicating an improvement in overall business conditions. However, the PMI was down to the lowest reading in 16 months.

March data signalled higher volumes of incoming new work in the Indian goods-producing sector. Growth in total new orders was, however, only moderate and the slowest in 16 months. Export orders rose slightly with the rate of expansion also easing. Output increased modestly, as persistent power shortages hampered
production. The pace of growth was the slowest in 16 months.

The key thread running through the above report is that things are good, but they are at their lowest reading in 16 months.  Here is a chart of the data: 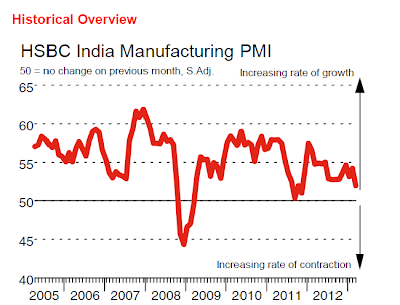 Turning to the services index, we see the following:

Output in the Indian private sector rose during March, extending the current expansionary sequence to 47 months. However, the HSBC India Composite Output Index fell from 54.8 in February to 51.4 indicating that activity increased slightly, and at the slowest pace in 17 months. Output growth eased across both the manufacturing and service sectors.

After adjusting for seasonal factors, the headline HSBC Services Business Activity Index registered 51.4 in March, down from 54.2 in February, signalling a further monthly expansion of services output. That said, the latest increase in business activity was only slight as new business growth eased. Moreover, the index posted well below the long-run series average (57.2).

As with the manufacturing numbers, we see some good data points.  However, and again, we see the phrase lowest in 17 months.

Last week the Reserve Bank of India lowered its interest rate 25 basis points.  Here are some salient points from that release:

4. India’s GDP growth in Q3 of 2012-13, at 4.5 per cent,  was the weakest in the last 15 quarters. What is worrisome is that the services sector growth, hitherto the mainstay of overall growth, has also decelerated to its slowest pace in a decade. While overall industrial production growth turned positive in January, capital goods production and mining activity continued to contract. The composite purchasing managers’ index (PMI) declined in February, largely reflecting slower expansion in services. In the agriculture sector, the second advance estimates of kharif production indicate a decline in relation to the level last year. However, that may be offset, at least partly, by the rabi output for which sowing has been satisfactory.

7. The Union Budget for 2013-14 has made a firm commitment to fiscal consolidation. According to the revised budget estimates for 2012-13, the gross fiscal deficit (GFD)-GDP ratio, at 5.2 per cent, was contained around its budgeted level, mainly by scaling down plan and capital expenditures. The GFD-GDP ratio is programmed to decline to 4.8 per cent in 2013-14 and further down to 3.0 per cent by 2016-17, in line with the revised road map for fiscal consolidation.

8. With merchandise exports recording positive growth for the second successive month in February and non-oil imports contracting, the trade deficit narrowed significantly. For April-February 2012-13, however, the trade deficit was higher than its level a year ago with adverse implications for the current account deficit (CAD), already at a record high. Although capital inflows, mainly in the form of portfolio investment and debt flows, provided adequate financing, the growing vulnerability of the external sector to abrupt shifts in sentiment remains a key concern.

The outlook is not promising:

11. The Central Statistics Office (CSO) has projected GDP growth for 2012-13 of 5.0 per cent, lower than the Reserve Bank’s baseline projection of 5.5 per cent set out in the TQR, reflecting slower than expected growth in both industry and services. Key to reinvigorating growth is accelerating investment. The government has a critical role to play in this regard by remaining committed to fiscal consolidation, easing the supply bottlenecks and improving governance surrounding project implementation.

12. On the inflation front, some softening of global commodity prices and lower pricing power of corporates domestically is moderating non-food manufactured products inflation. However, the unrelenting rise in food inflation is keeping headline wholesale price inflation above the threshold level and consumer price inflation in double digits. Also, there is still some suppressed inflation related to administered prices which carries latent inflationary pressures. All this complicates the task of inflation management and underscores the imperative of addressing supply constraints. From an inflation perspective, upward revisions in the minimum support prices (MSP) should warrant caution in view of their implications for overall inflation.

Despite the strong reading from both the manufacturing and service sectors, there are serious structural problems.  Inflation is too high, limiting the policy options available to the central bank.  The government is very difficult to work with, the power infrastructure is in terrible shape and there are two large deficits -- budgetary and current account.