Consider this from Bloomberg:

Copper futures slumped to the lowest in almost eight months after an industry report on manufacturing signaled demand may ease in China, the world’s biggest user of industrial metals.

The Purchasing Managers’ Index was 50.9 in March, government data showed today. The median estimate of analysts in a Bloomberg News survey was 51.2. Confidence among large manufacturers in Japan improved less than economists expected.
.....
Stockpiles monitored by the Shanghai Futures Exchange rose to 247,591 metric tons last week, the highest in at least 10 years. In the first quarter, inventory tracked by the London Metal Exchange surged 78 percent to 569,775 tons, the highest since October 2003.

What we're looking at is a huge over-supply issue.  In addition, while China is growing the PMIs are just slightly positive right now.

Let's place this information in context with the copper ETF: 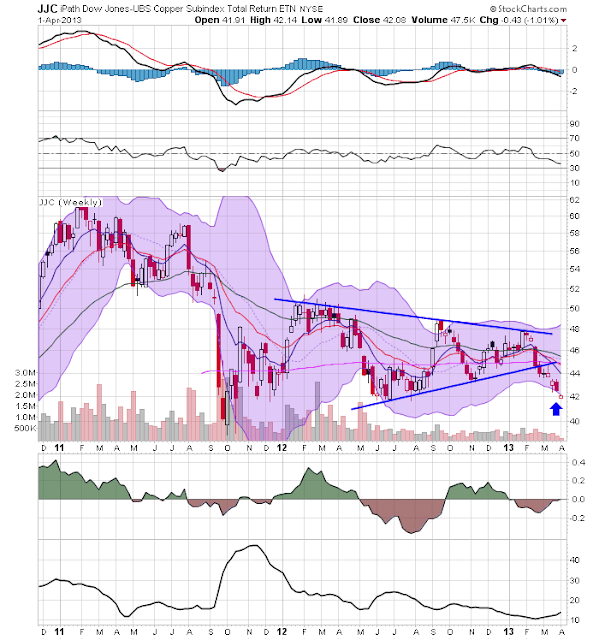 The big news on the weekly chart was the break below support at the end of February.  Since the, prices have continued to drift lower. 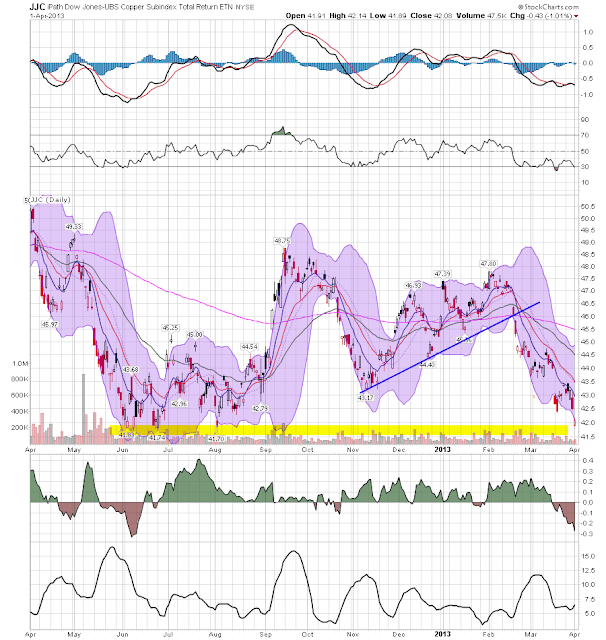 The daily chart shows the move lower in far more detail.  Prices gapped lower at the end of February, consolidated in the 44-44.5 level for a few weeks, then moved lower again in mid-March.  Prices are now at the lower end of their trading range for the last year.  Additionally, we see declining MACD, RSI and CMF, along with a very bearish price picture.

I should add, however, that the internals of the latest Markit report were improving. That could make these lows the lowest we'll see for awhile.