Consider these charts of the Chinese market: 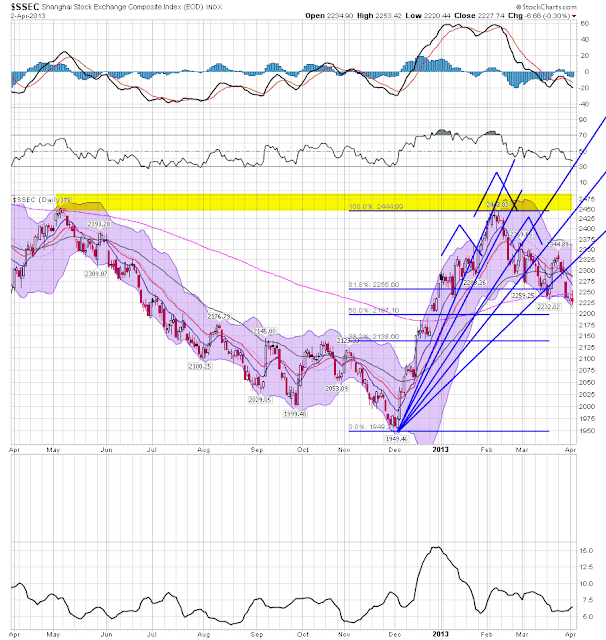 On the daily chart we see a general decline from May to December of last year.  During this time, the People's Bank of China was engaging in a more restrictive monetary policy, leading to lower growth.  However, starting in December of last year, we see a major spike in activity caused by the bank loosening credit a bit.  Prices rallied a little over 15%.  However, notice that for the first three months of 2013 prices have formed a head and shoulders top, with prices currently trading just below the 200 day EMA.  Also note the weak momentum reading. 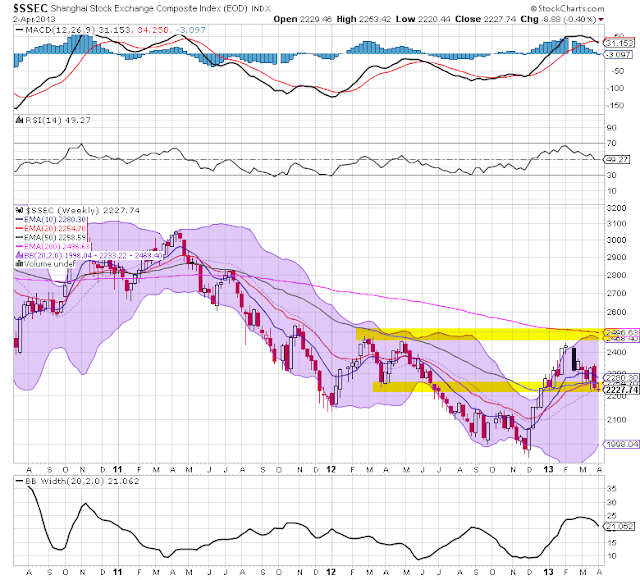 The weekly chart shows that prices have been declining for the better part of two years.  The more recent rally rose to levels seen in early 2012, but have since fallen a bit.

The question now becomes, is China ready to retake its lead as the global growth engine.

Let's start by looking at the latest Markit manufacturing survey:

After adjusting for seasonal factors, the HSBC Purchasing Managers’ Index™ (PMI™) – a composite indicator designed to provide a single-figure snapshot of operating conditions in the manufacturing economy – posted 51.6 in March, up from 50.4 in February, signalling a modest improvement. Operating conditions in the Chinese manufacturing sector have now improved for five consecutive months.

Production levels increased for the fifth month in a row in March. The rate of expansion accelerated from February to a solid pace, the second-fastest in two years. Behind the rise in output, total new orders rose solidly, and for the sixth month in a row. A number of respondents attributed growth to strengthened client demand. Meanwhile, new export orders also increased, albeit marginally.

Volumes of outstanding business declined for the second successive month in March. The rate of backlog depletion was broadly unchanged from February, and remained slight overall. Staffing levels, however, were relatively unchanged from the previous month.

Overall, these are good numbers and should be read bullishly.

HSBC China Composite PMI™ data (which covers both manufacturing and services) signalled a further expansion of output during March. Activity has now risen at the composite level for seven successive months. Furthermore, the rate of expansion accelerated from February to a solid pace. The HSBC China Composite Output Index posted 53.5 in March, up from February’s four-month
low of 51.4.

Output rose simultaneously across both the manufacturing and service sectors for the fifth consecutive month during March. Furthermore, both sectors reported solid rates of expansion. The service sector recorded the strongest rate of growth out of the two sectors, with the latest expansion the fastest in six months. The HSBC China Services Business Activity Index recorded 54.3 in March, up from 52.1 in February.

Total new business growth also accelerated in March, with both monitored sectors posting solid rates of expansion. Moreover, new order growth at the composite level was the second-strongest in 26 months.

Volumes of outstanding business fell at both manufacturing plants and service providers during March. However, the rates of depletion were only slight in both cases. At the composite level, backlogs of work declined for the second successive month.

Again, we see an overall strong report and one that shows continued improvement.


Finally, let's turn the LEIs for China as published by the Conference Board:

The Conference Board LEI for China increased in February. Consumer expectations, total loans issued by financial institutions, and the (inverted) PMI supplier delivery index all made large positive contributions to the index this month. The leading economic index increased by 6.2 percent (about a 12.8 percent annual rate) between August 2012 and February 2013, about the same rate of growth as in the previous six months. The strengths among the leading indicators have remained more widespread than the weaknesses in recent months.

Let's look at the data in more detail: 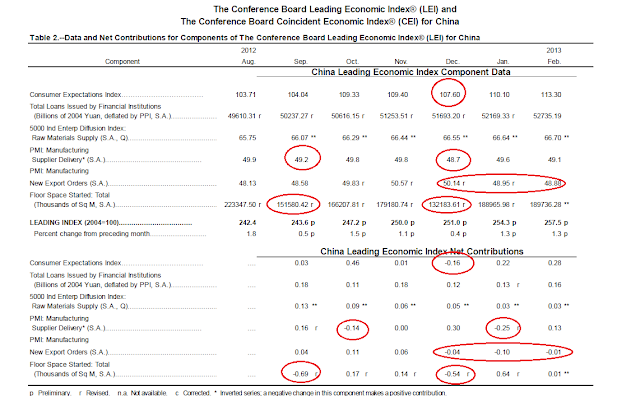 In the chart above, I've circled the negative events over the last 6 months.  Notice there are 8 -- a very impressive showing.

The above data tells us that the Chinese market is currently taking a breather, consolidating gains and waiting for news to move higher.