Will Japan Return To Growth? 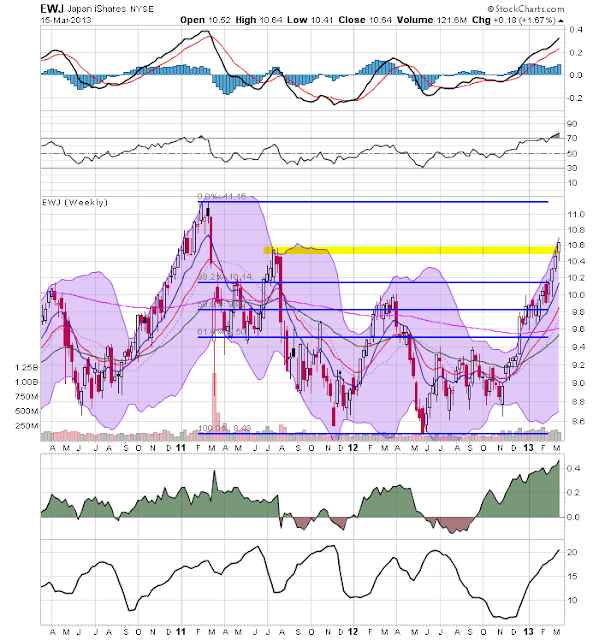 The above weekly chart of the the Japanese ETF shows two recent rallies.  The first occurred at the end of last year.  The ETF traded in sideways for the first few weeks of the year, then started to move higher.  Now prices have moved through resistance at around the 10.5 area and have a fair amount of daylight to the 11.1 level.

However, the real story for Japan has been the drop in the yen's value: 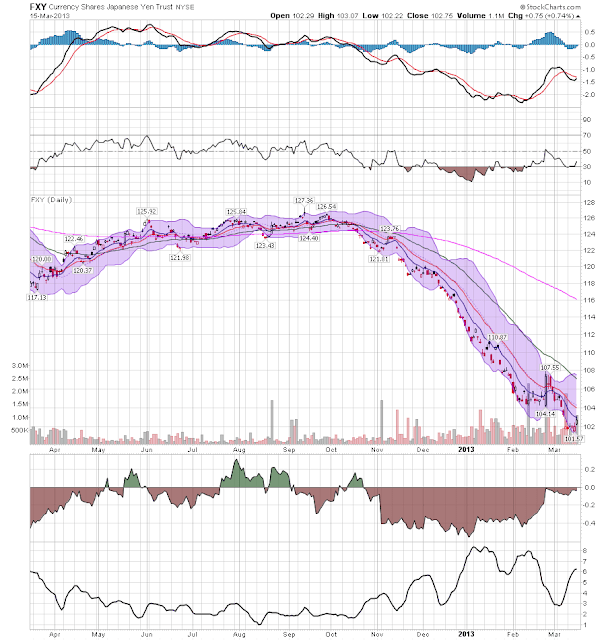 From the peak to low on the chart, we see a decline of a little over 20%.

Most of the recent market action is due to the hope that the new head of the BOJ will engage in a reflation of the economy:

Investors are betting that Prime Minister Shinzo Abe’s nominee to run the Bank of Japan will open the monetary floodgates, buy government bonds and pursue a 2% inflation target to reflate the long-stagnant Japanese economy. The new leadership team at the BOJ, led by Haruhiko Kuroda, is awaiting approval from the Japanese Diet this week.

Viewing Japan as the mother of all reflation plays, foreign investors are pouring money into Japanese stocks at a frantic pace. Last week, overseas investors bought about $10.5 billion worth of Japanese equities. That matters since non-Japanese investors drive about 60% of the daily trading activity at the Tokyo Stock Exchange.

Abe is trying to simultaneously push the BOJ to weaken the yen to boost exports, and stoke domestic demand by creating inflationary expectations. Nomura estimates that Japan currently has about a $170 billion gap between current GDP and potential GDP. The yen has already weakened dramatically against the dollar. However, it’s uncertain whether the central bank can move Japan from its current deflation to moderate inflation. (For a useful guide to Abenomics, check out this recent post from Business Insider.)

Let's take a look at some underlying Japanese data, starting with GDP.

At the end of 2010 and beginning 2011, we see a contraction caused by the Tsunami that occurred in the spring of 2010.  However, since the sharp rebound in 3Q11, GDP has been on a downward trajectory.

Let's take a look at the detail of the GDP report: 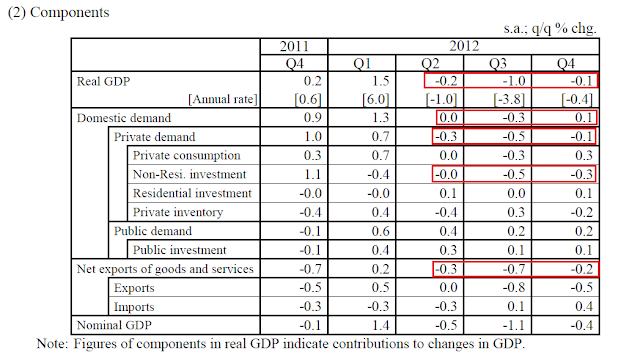 The most obvious point of the above graph is that Japan has been contracting for the last three quarets.  The primary reason for this has been a drop in private demand.  In looking at the sub-components, notice that non-residential investment has either stood at 0 or contracted for the last three quarters.  However, we see an uptick in this number from the latest data: 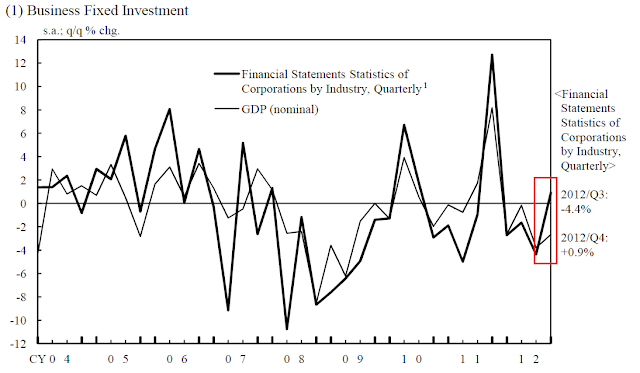 Inventory adjustments have also been responsible for two quarers of contraction.

However, for the Japanese, the big issue is the drop in exports.  Remember: Japan invented the Asian model for growth, namely, export your way to prosperity.  Yet exports have been dropping for the last three quarters, and have contracted in four of the last five.  One of the things that traders are betting on is that the 20% drop in the yen will turn this number around.  This is necessary, as the nominal Japanese trade balance has been negative for the last seven quarters:

Part of the reason for this drop has been the EU recession and US' slow growth.  However, the US appears to be at least holding its own.  Also remember that Japan and China had a 2 quarter trade spat last year that greatly reduced Japanese exports to that country; this spat has been calming down over the last few months.

Link for all charts and economic data.
Posted by Unknown at 1:00:00 PM