For the first few months of this year, I have found the actual state of the equity markets to be incredibly hard to determine.  The biggest analytical headache has been the Fed's QE program -- a program which I support from an economic perspective.  The problems caused by this program relate to its effects on the theoretical "natural flow" of money that occurs throughout the business cycle. First, when the equity market starts to rally, the bond market (which should rise during the recession and should hold those gains for the first part of the recovery) should sell off after traders realize the the economy is growing.  At this stage of the recovery the equity market should provide a better rate of return than the bond market.  This bond market sell-off does not happen under the QE program as there is always a bid under the treasury market.  Additionally, low yields in the treasury market means investors will look to other areas of the market for fixed-income like returns: hence defensive market segments like utilities (the XLU is currently yielding 3.86) and consumer staples (which is currently yielding  2.8%) have also been rallying when they should be selling off to a certain extent.

Put more succinctly, my natural market cues for a stronger recovery have been masked by the Fed's program, leading me to mis-diagnose the current state of the market which is clearly rallying.  I should also add that there is now evidence that the economy is in fact stronger than I first thought, a point which I'll make later today.

This is very clearly evidence from the P&F chart: 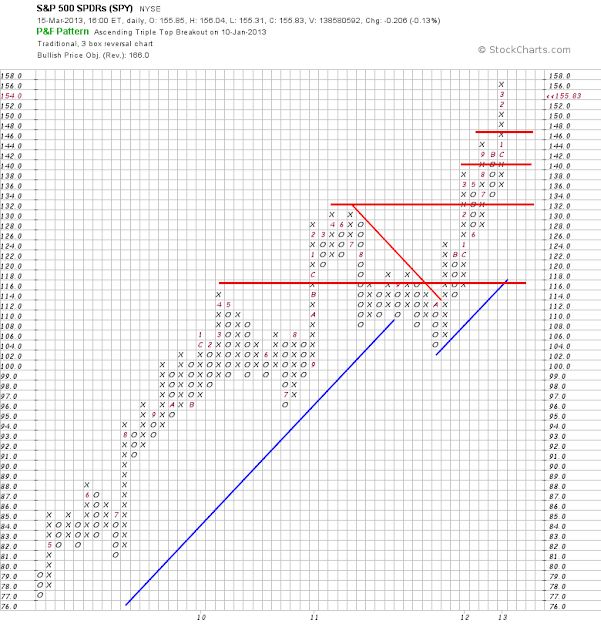 The general upward trend is very clear.  In addition, notice how prices have been clearly moving through resistance at a regular clip.

Also consider this monthly chart of the SPYs: 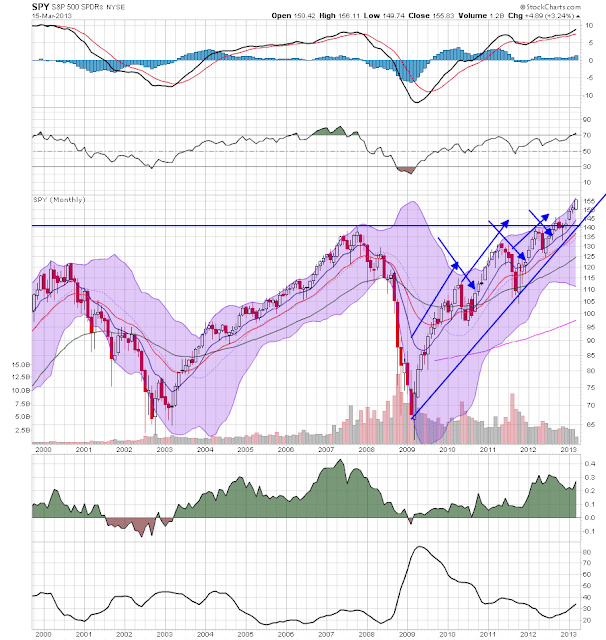 The rally from 2009 has been interesting.  First, notice that the rate of increase (the percentage rise) for each leg continually decreased.  The first leg up shows an increase of about 67.5%, the second leg shows an increase of 35% and the third leg shows an increase of 28.4%.  This movement implied that when the SPYs hit resistance around the 142 level, they'd stall or consolidate for far longer -- a conclusion bolstered by the weakening MACD and the economic event of the sequester and the payroll tax hike.

However, we haven't seen prices consolidated.  Instead, we see a sell-off that lasts for a few weeks (roughly the end of February and early March) which is then followed by new highs. 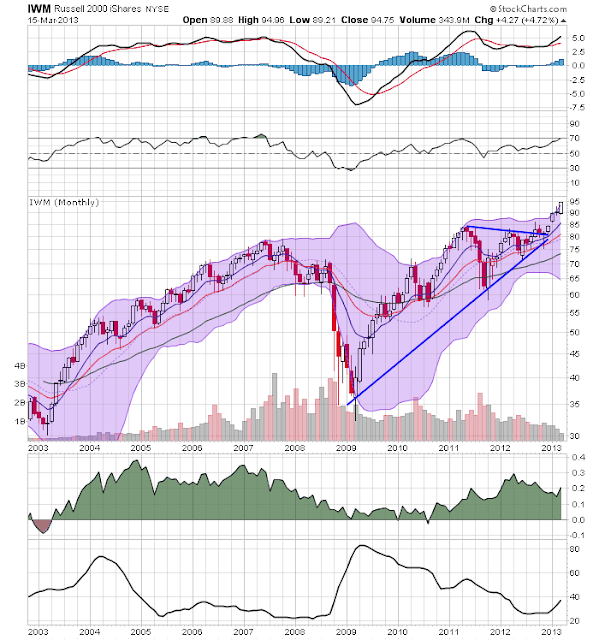 Also notice how the IWMs mirror the SPY analysis, with the exception of the symmetrical triangle at the top of the latest rally.