It's time for the annual springtime Eurozone crisis!!!

"Springtime for Merkel and Germany,
Winter for Cyprus and Greece!"
( - with apologies to Mel Brooks)

First, let me provide some tax background on the Cyprus issue. When the EU was formed, the big question from a tax planning perspective was how to find the front door into the union; that is, where can we establish a company that has access to a variety of EU markets that is also a good location from a planning perspective? This led to two answers: Ireland and Cyprus. The reason for both is that for foreigners, both locations have low rates of taxation and an extensive tax treaty network, so that that once you’re physically located in Cyprus you can do business in other countries and transfer money back to Cyprus in a tax advantaged manner. This is what a tax planner calls a “hub and spoke” planning system; it’s used by virtually everybody who engages in international transactions in one form or another. Because of their tax haven status and extensive treaty network, Cyprus has become a major banking center for the EU.

Spring will be here on Wednesday, and you know what that means: it's time for that annual rite of spring, the Eurozone financial crisis! I have to say, this year the Germans and their Eurocrat friends really seem to have outdone themselves, mandating across the board confiscations of depositor cash in Cyprus banks, all so that senior bondholders (other Eurozone banks) would remain unscathed. The minimum rate of confiscation is supposed to be about 5%. By contrast, I have read that if a US depositor kept a proportionate share of their deposits in each and every US bank from 1929 through 1933, their net loss would have been 4%.

It's hard to disagree with virtually every commentator who has examined this deal so far, from Mish to Paul Krugman, that it practically invites a run (or at least a brisk walk) on the banks in every Mediterranean Eurozone country.

Because of that, i.e., because it is easy to see how disastrous a policy this is, it is also likely that the deal will change between now and the end of the week.

But's let's assume that the policy is rammed through the legislature in Cyprus. What are the ramifications to the US economy?

The most important ramification is likely to be that US banks will once again attract European deposits, just as they did when depositors' faith in European banks was shaken 2 years ago. Here's a graph of M1 for the last 5 years. 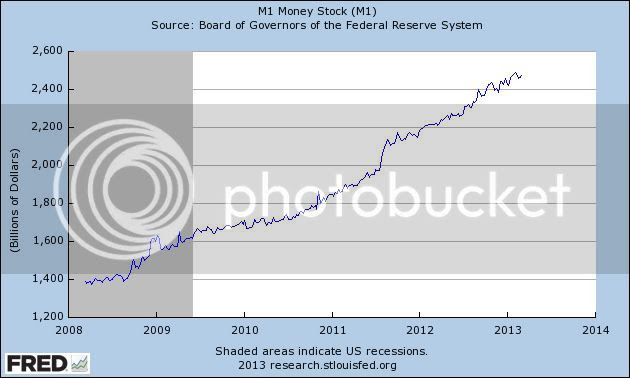 Note the straight move upward two years ago. At that point, YoY growth in M1 came close to 20%. A similar more now certainly can't be ruled out.

The second important ramification is that the influx of money into the US as a safe haven should cause interest rates to decline further, and in particular mortgage rates are likely to decline to fresh new lows. Here's a graph of mortgage rates for the last 5 years, compared with mortgage refinancing (from Mortgage News Daily): 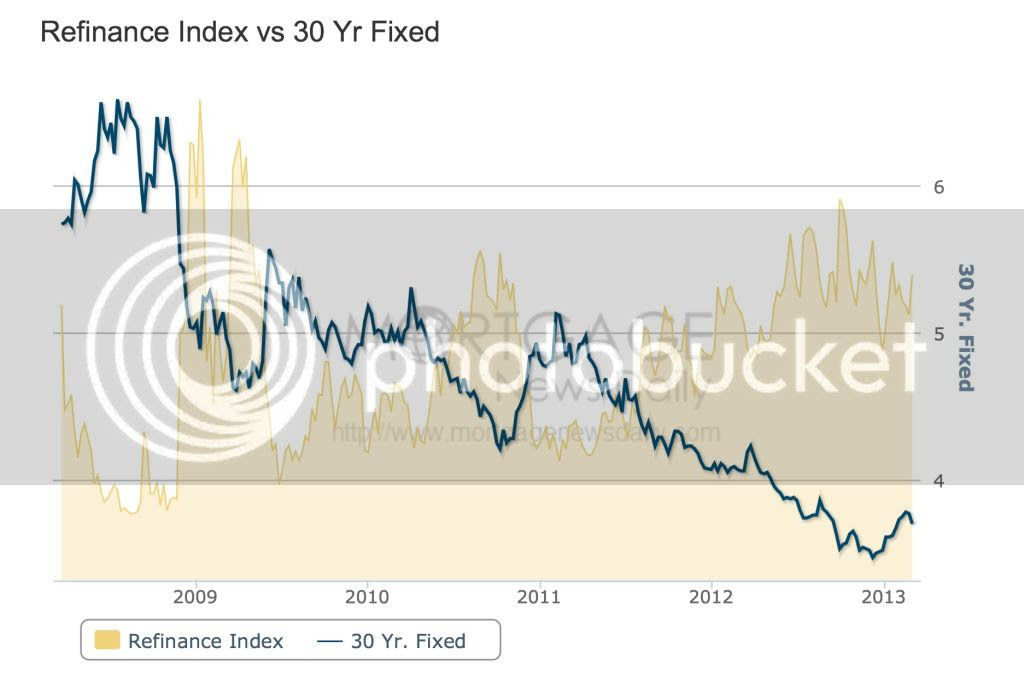 Note that each spring for the last 3 years, mortgage rates have declined sharply, with each new global financial crisis. This policy all but assures another, further decline in rates, which will spur yet another round of household deleveraging in the US as homeowners refinance. In fact, the spike in refinancing could be higher, as the recent rebound in housing prices make more homeowners eligible for refinanncing.

The US dollar will also likely strengthen, meaning US imports will increase and exports will suffer, but on blalance, just as in each of the last three years, the net result is likely to be positive for growth in the US.

As I said at the outset, however, the European crisis should be seen as in a state of flux, so the policy announced Sunday may no longer be the policy by Friday.

But really, the latest move in the Eurozone richly deserves this musical accompanyment: