Will France Be the Next EU Basket Case?

The numbers coming out of France continue to disappoint.  More importantly, there is little indication there is any room for improvement in the near future.  The most concerning conclusion is the economic numbers are slowly degenerating to the point where France becomes the next EU country to have an economic crisis.

Let's start with a look at GDP: 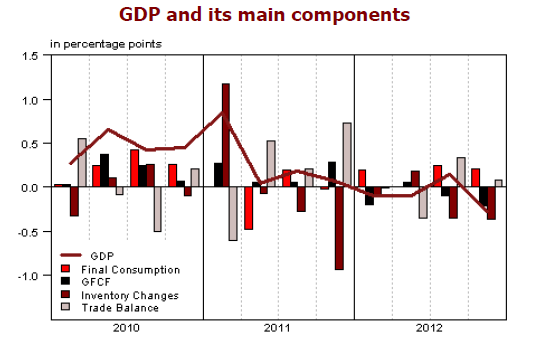 The red line shows overall GDP growth.  It was barely positive in 2011 and has printed three quarters of negative growth in 2012. 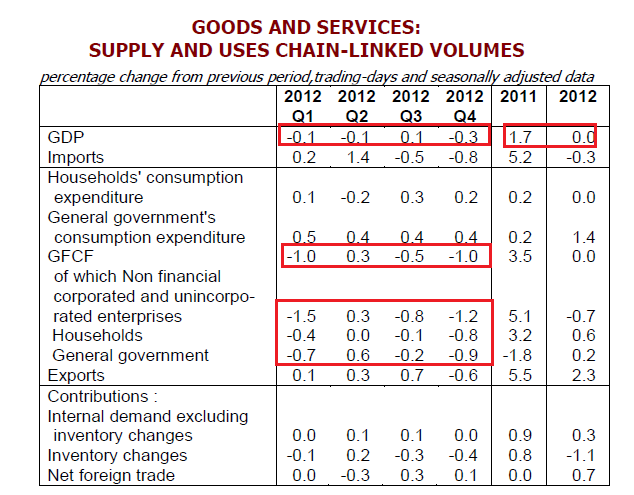 The above chart places the 2012 slow growth number in perspective.  The biggest problem is a lack of investment, which contracted strongly in three of the last four quarters.  Also note the breadth of the decline, which occurred at the business, household and government level.  The other areas of the economy are in fair shape, with PCEs and trade growing, albeit at low levels. 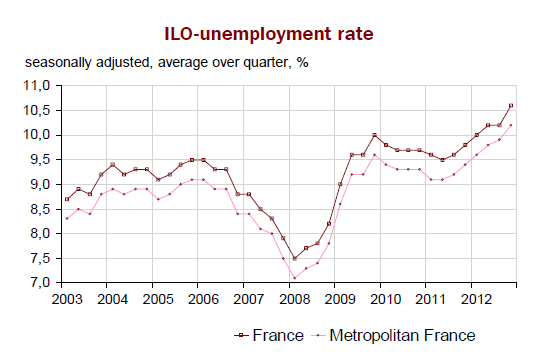 And then there are the latest Markit readings from both the service  and manufacturing sector.  Let's start with the service sector:

Business activity in the French service sector continued to fall sharply in February. Marked reductions in incoming new work and outstanding business were also recorded, while employment was lowered further. Confidence regarding future activity dipped to a four-month low, while margins were squeezed by a combination of rising input costs and declining output charges.

The seasonally adjusted final Markit France Services Business Activity Index – which is based on a single question asking respondents to report on the actual change in business activity at their companies compared with one month ago – posted 43.7 in February. The latest reading was little-changed from the near four-year low of 43.6 in January, and signalled a marked rate of contraction. A difficult economic climate and declining levels of incoming new work were cited by panellists. 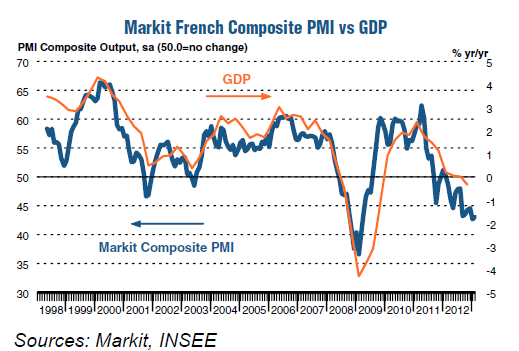 To put it bluntly, the French service sector is in terrible shape.  And the manufacturing sector isn't much better:

The French manufacturing sector remained in the grip of a sharp downturn in February. Although rising slightly from January’s four-month low, the headline Purchasing Managers’ Index® (PMI®) – a seasonally adjusted index designed to measure the performance of the manufacturing economy – remained indicative of a considerable rate of deterioration in overall operating conditions. This was highlighted by an index reading of 43.9, from 42.9 in January. That was marginally higher than the earlier Flash reading of 43.6.

Output at French manufacturers decreased for a twelfth consecutive month in February. The pace of contraction remained marked, despite easing since January. 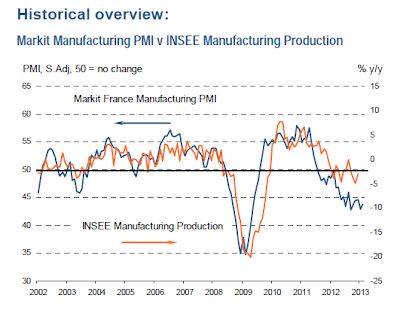 And this fall has led to a drop in industrial production:

There is simply no way to spin these numbers.  The French economy is in terrible shape.  Most importantly, it's possible that this low level of activity could start to feed on itself, dragging the economy as a whole down with it.