John Hinderaker: The Economic Stupid is Strong With This One

I read four political blogs regularly: Daily Kos, Talking Points Memo, Hot Air and Powerline.  They each have good and bad points, but I find that each helps to explain the respective position of each party/point of view in some manner.

All four try to report on economics, and all four do a terrible job of it, largely because each have no choice but to see through their respective political lenses without much underlying economic theory or knowledge to back it up.  Or, if they rely on economic knowledge, it's usually knowledge that has been fantastically wrong for the majority of the time.

Case in point: yesterday's post of an imminent economic collapse as written by John Hinderaker at Powerline.  It's rare that you find a column so full of inaccurate statements (with the exception of his own global warming denial posts).  So, let's begin:

Just about everyone expects the economy to crash, in some fashion, in the next few years. The fundamentals are very bad: year after year of virtually no growth; ever-declining labor force participation; grotesquely wasteful government spending; exploding federal debt; cronyism that saps vitality from our economy; and a largely dysfunctional education system. The questions are: 1) when will the crash happen? and 2) what form will it take? 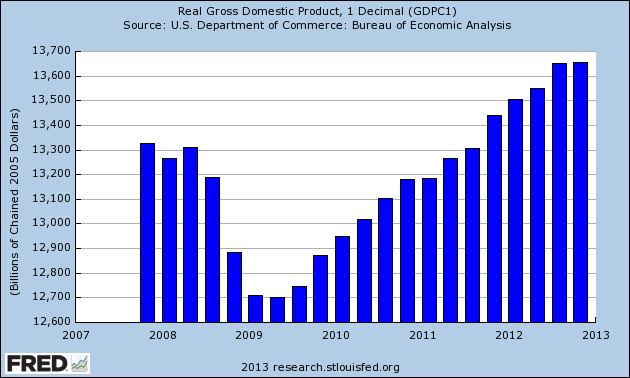 Let's start with real GDP growth.  As the chart above demonstrates, GDP has been growing consistently for the last four years and is now higher than pre-crisis levels.  While he is correct that growth has been slow, that does not mean stagnant or non-existent.

And then there is the labor force participation argument. He is correct that this number has been dropping for the last four years.  However, it's also obvious that he hasn't read any research on the issue.  This is a topic we've been covering for awhile now.  Remember that with the baby boomers now entering retirement, we're seeing about 10,000 people leaving the labor force every day.  As a result, the general consensus is that about half of the drop is due to retirements (see this paper from the San Francisco Fed).

And then there is the exploding federal debt issue.  First -- where was this guy in 2004 when we decided to invade a country and not raise taxes to pay for it?   Was there even a peep of concern about that long-run issue?  Probably not, even though that was a primary cause of the debt we're currently facing.  Remember that for Korea we raised taxes -- which was then considered to be a move of good governance.  As for the runaway deficit issue, it's actually projected to do much better than he things, as the most recent CBO analysis notes: 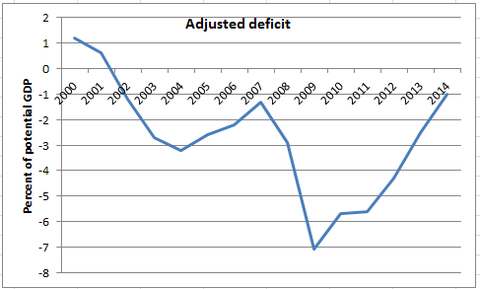 Regarding the wasteful the wasteful government spending argument I would note that with the exception of defense spending, I sincerely doubt the federal government does much good in Mr. Hinderaker's mind.  However, let's look at total government expenditures: 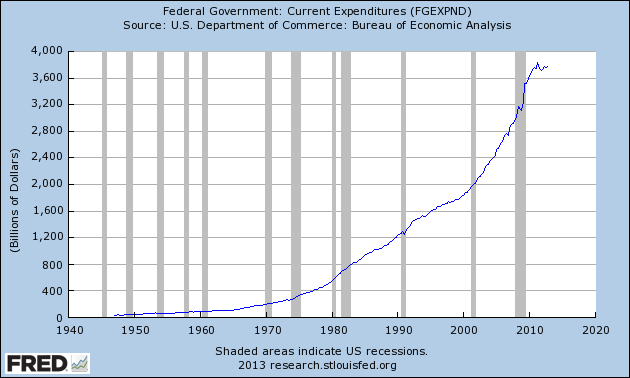 Notice how the total number has been stable for the last few years?

Next, Mr. Hinderaker discusses the last two asset bubbles.  He does OK with the tech bubble, but then we get this gem of crap:

In 2008, the situation was quite different. Hardly anyone foresaw what happened. Very few understood how feel-good government policies that forced banks to make bad mortgage loans, the Typhoid Mary role played by Fannie Mae and Freddy Mac, and the little-understood consequences of securitization would come together to create financial disaster. I was probably a typical investor–when the crisis hit, my retirement portfolio was weighted toward bank stocks because they weren’t considered to be very risky.

Yes, it's the old "CRA led to the collapse canard" back from the dead.  There are numerous reasons for the mortgage collapse, but the CRA isn't one of them -- not even remotely.  As the Federal Reserve noted back in 2008:

In conclusion, I believe the CRA is an important model for designing incentives that motivate private-sector involvement to help meet community needs. The CRA has, in fact, been helpful in alleviating the financial isolation of many areas of concentrated poverty, but as our report illustrates, there is much more that could be done in these communities. Contrary to the assertions of critics, the evidence does not support the view that the CRA contributed in any substantial way to the crisis in the subprime mortgage market. Today's discussion is an important first step in the process of identifying other initiatives and areas of cooperation between government and the private sector that will effectively address the continuing challenge of poverty in the United States.

I would also suggest doing a search on Barry Ritholtz's The Big Picture Blog to get an idea for how completely and thoroughly debunked this idea is.

As for no one warning anybody about the real estate crash, it's obvious he didn't read any major economic blogger at the time who were collectively warning about the bubble crashing.

So -- what will happen with the big crash?

So what form will the next crash take? The great fear, of course, is inflation. Ben Bernanke has gone on a money-printing spree without precedent in our history, to the point where we are like the cartoon character who walks off a cliff and keeps going for a while before he realizes there is nothing holding him up.

The old "money printing and an inflation" argument.  First, we've been seeing this argument from Chicago School economists for the last four years.  It hasn't happened as shown in this chart of the year over year percentage change in US CPI: 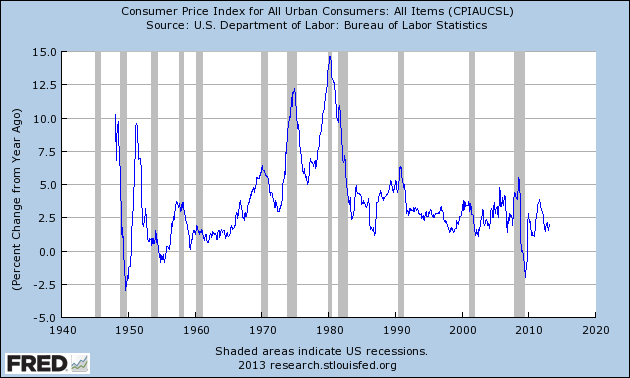 See?  No inflation.  And the reason is simple (for anyone who actually looks at the data): monetary velocity is low: 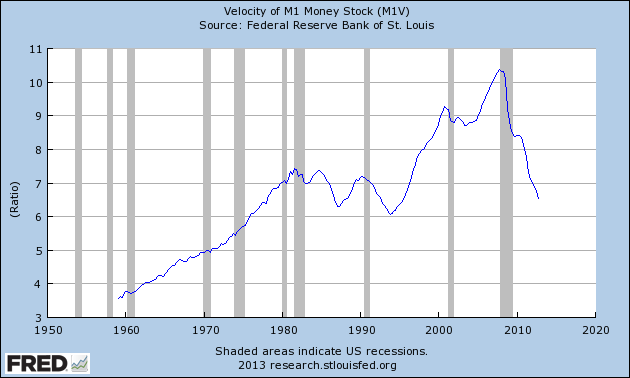 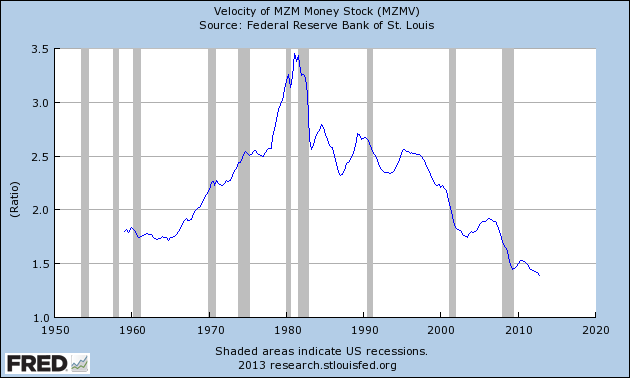 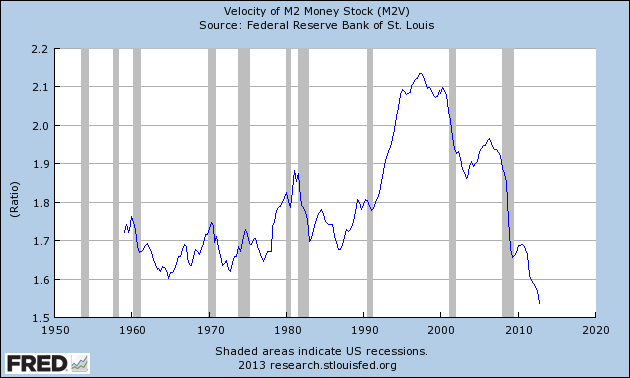 What if you printed a lot of money, and no one spent it?  The entire CPI explosion goes out the window. We would need to see a massive and quick spike in velocity the likes of which we have never seen in order for the "inflation is around the corner" argument to have any validity.  And that assumes that the Fed is asleep at the wheel when it comes to mopping up excess liquidity.  Does Hinderaker seriously think the Fed hasn't given an ounce of thought for how to end the program?

And what of the exact nature of the crash?

All of that is rather comforting. Still, I doubt whether I, or anyone else, has foreseen the nature and dimensions of the next crash. We are all passengers on a railroad train, facing backward. We see the past and try to make sense of it. That is a worthy endeavor, but invariably, the future comes out of nowhere and takes us by surprise. Only when it has receded into the past do we claim to understand it and, perhaps, to have seen it coming.

Translation: I really have no idea, but it's really going to be bad.  Very bad.  Because Obama.  Or CRA.  Or taxes.  Or debt.  Or deficit..... you get the idea.  Simply put, this is nothing more than an individual who is scared for political reasons letting those fears guide his economic "analysis."

I usually don't jump into political frays, largely because they are so utterly devoid of the possibility of developing any meaningful dialog.  But the above "analysis" (and I use that term because none other really presents itself) is so full of wrong statements (about the only thing he got right was his name) that it needs to be hacked apart.  I read the financial press regularly and there are no calls for imminent doom or collapse -- unless you consider World Net Daily or Breitbart reputable sources for any information.  The world is not projected to fall apart tomorrow.  The people calling for a massive spike in inflation have been doing so for the last four years and they're no closer now to being right than they were when they first opened their mouths.  Instead, the general consensus is that we're in a slow growth, post-financial crash recovery which is slow due to the massive amount of de-leveraging that is going on.

I should also add that I'm praying that anyone who relies on the above analysis deserves to be on the other side of any trade I execute over the next few years.  At least then I'll know that I'm taking money from a complete sucker.