No, Mr. Draghi, Europe is Not Healing 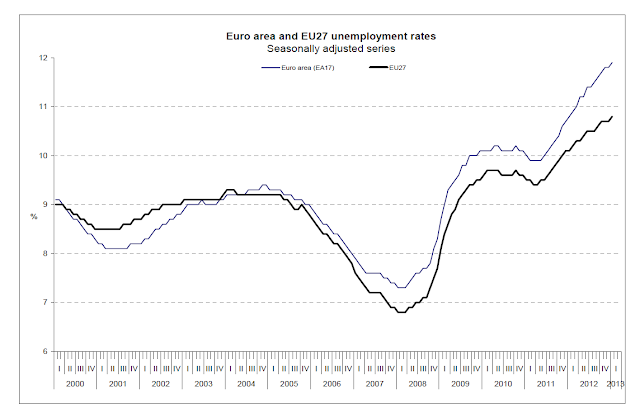 You'll notice a month to month increase of .1%, indicating that unemployment is getting worse, not better.  As unemployment is a coincident economic indicator, this is pretty good evidence that the EU's overall condition is worsening.

But the news actually gets worse from there:

So -- compared with a year ago, unemployment has increased 1%.  And on a year over year basis most countries -- as in 70% -- saw an increase while only 25% (7 countries total) saw a decrease.  That's an unmitigated economic policy disaster.

And then there are the latest round of Markit manufacturing surveys.  Here's the short version:

I understand that Central bankers jobs have an inherent PR component.  And, a central bank head who was alarmist in his public statements would do more harm then good.  However, the continued talk of a 2H13 turnaround is looking more and more like a pipe dream and the EU slogs its way through continued economic contraction.