Last week, the Australian market was one of the best performing of the international ETFs I follow.  Let's first take a look at the charts. 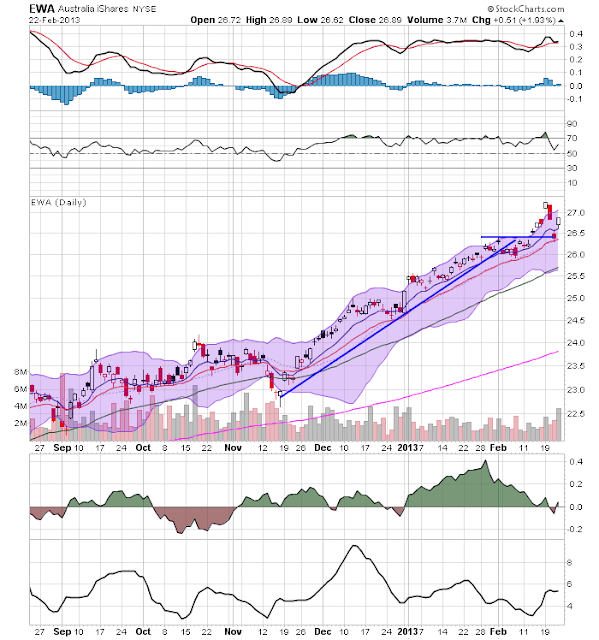 The daily EWA shows that the overall uptrend is still intact.  The trend started in mid-November and continued through the first of the year.  Prices briefly broke trend in early February, but instead of falling they consolidated sideways.  But starting in mid-February they again started moving higher.  The underlying technicals are generally bullish.  The MACD has given a buy signal (even though it's trading sideways) and the the EMAs are rising.  However, the CMF is weakening a bit. 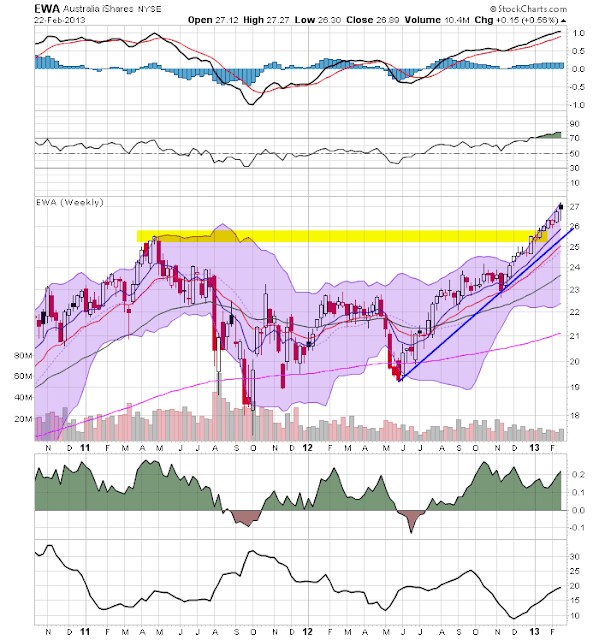 Despite the somewhat weakening picture on the daily chart, the weekly chart is still rallying and has nothing but bullish indicators -- a rising set of EMAs and a strong underlying momentum in conjunction with a strong CMF. 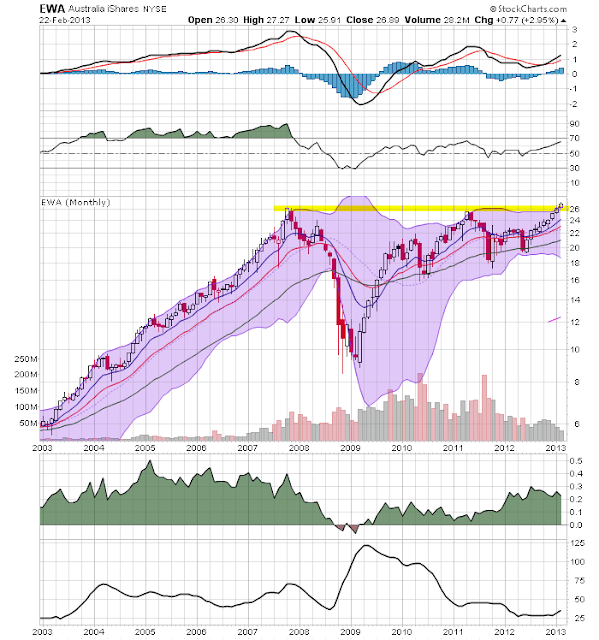 However, the real strength is seen on the monthly chart.  Prices are now rising above their previous highs established in late 2007.  The one drawback to this bullish interpretation is the weak volume reading over the last 6 or so months, indicating declining participation in the rally.

The reason for this strength is the underlying economy.  Here is a general summation from the latest minutes of the RBA:

Members recalled that the national accounts, which had been released the day after the December Board meeting, showed that the Australian economy grew by 3.1 per cent over the year to the September quarter, which was around trend pace. Growth in the September quarter at 0.5 per cent was a bit slower than trend, with public demand declining – consistent with the fiscal consolidation that was occurring – while growth in consumption slowed somewhat following very strong growth earlier in the year. In contrast, mining investment rose strongly in the quarter and was still expected to peak sometime over the next few quarters, with information generally suggesting that the outlook for mining investment had not substantially changed despite the recent increase in iron ore prices.


More timely information pointed to growth in economic activity having picked up in the December quarter, with a significant contribution coming from exports. Against that, members noted that surveys of business conditions remained below average for most industries. While conditions remained soft in the construction industry, there were some signs that the housing market had firmed, partly due to the series of interest rate reductions over 2012. Notwithstanding month-to-month volatility, building approvals had increased since the middle of 2012, particularly in states other than Victoria, and prices and rental yields in the established housing market had also picked up.


were briefed that resource exports were estimated to have increased strongly in the December quarter, including coal exports following the end of a significant industrial dispute. The recent heavy rainfall in Queensland was likely to have a noticeable impact on the transport of coal to ports, but at the time of the meeting it appeared that the effect on exports would be much less pronounced than was the case in 2011. The heavy rainfall and flooding had also affected some agricultural areas.


Household consumption in the September quarter had slowed from the rapid pace seen in the first half of 2012. Information available at the time of the meeting, including from liaison, suggested that growth in the December quarter may have picked up a little, although conditions varied for different types of retailers. Over the same period, sales of motor vehicles had risen strongly. Measures of consumer confidence were at, or even a little above, long-run average levels.


Household income growth had slowed, in line with the weaker labour market. The unemployment rate had drifted up gradually over 2012, to be 5.4 per cent in December. Members noted that, over the same period, the labour force participation rate had declined a little and average hours worked were a little lower. Total employment had grown moderately in the second half of 2012, despite some decline in employment in mining and business services. Job vacancies and other forward-looking indicators had continued to soften, but remained consistent with modest employment growth in the months ahead.


CPI inflation was 0.5 per cent in the December quarter, on a seasonally adjusted basis, following 1.2 per cent in the previous quarter, which had been boosted by the introduction of the carbon price and means testing of private health insurance rebates. The various measures suggested that underlying inflation was about ½ per cent in the December quarter. This followed a slightly higher-than-expected outcome three months earlier. Year-ended underlying inflation had remained around 2¼ per cent since the middle of 2012. Consistent with earlier expectations, the effect of the introduction of the carbon price on these measures appeared to be modest.
Posted by Unknown at 1:30:00 PM