The Singapore economy grew by 1.5 per cent on a year-on-year basis in the fourth quarter of 2012, an improvement from the flat growth recorded in the preceding quarter. On a quarter-on-quarter seasonally-adjusted annualised basis, the economy grew by 3.3 per cent, a reversal from the 4.6 per cent contraction in the third quarter. 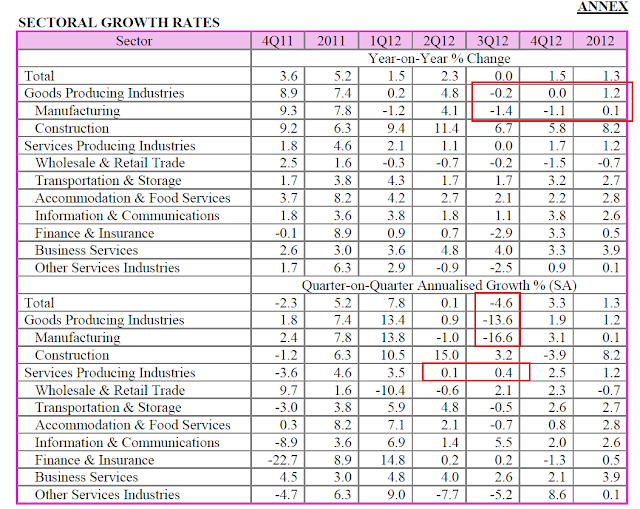 The third quarter slowdown was primarily the result of a big drop in manufacturing -- a drop of 16.6% which followed a 1% drop in the 2Q.  This in turn can be attributed to the EU slowdown occurring at the same time.  But also notice the slowdown in the service sector in the 2Q12 and 3Q12 mostly attributable to "other service industries" indicating the slowdown was broad-based.

Considering the macro-level annual data, we get the following:

For the whole of 2012, Singapore’s GDP growth slowed to 1.3 per cent, from 5.2 per cent in 2011, mainly due to weakness in the externally-oriented sectors. Weighed down by the contraction in the electronics cluster, manufacturing sector growth slowed sharply from 7.8 per cent in the previous year to 0.1 per cent. By contrast, the construction sector growth accelerated from 6.3 per cent to 8.2 per cent in 2012, due to the expansion in both public and private building activities.

The services producing industries grew by 1.2 per cent in 2012, anchored by a pick-up in growth in business services sector to 3.9 per cent, on the back of strong performance in the real estate segment. On the other hand, the wholesale & retail trade sector declined by 0.7 per cent, while growth in the finance & insurance sector and other services industries moderated to 0.5 per cent and 0.1 per cent respectively.