One of the things that mystified me when I was disputing a certain well-known forecasting firm's recession call in the last year was that their own long leading indicators appeared to suggest that the economy was going to strengthen. Sure enough, although stagnating or even slightly contracting over much of last year, for the last two months the ISM manufacturing index has registered unabashed expansion.

But first, a quick refresher. Back in June when the report first came in under 50 I said:

[D]oes a contracting ISM report mean recession now, or later in the year?  The answer to the first question is almost certainly not, and as to the second, the answer is more likely not, although the odds based on past data approach 50/50.

Since the record started in 1948, the report has declined from over to under 50 a total of 32 times.  Of those times, 11 were associated with the onset of recession and 3 more occurred during a recession after a brief period above 50.  That means the ISM manufacturing index has slipped under 50 a total of 18 times when no recession followed, meaning that a one month contraction in the index was associated with no recession a little more than 50% of the time.

And after last month's report I noted that:

[L]eft to itself, it looks like the economy wants to keep growing. Today's ISM manufacturing report of 53.4 is very potent evidence of that. The index has been reported since 1948. Since that time, only once - for the first six months or so of the 1973-74 recession - has the index ever recorded a reading above 53 during a recession.

Today's report is even stronger at 54.2. The below graph subtracts 54.2 from the index reading better to show its historical pattern, first from 1948 through 1977: 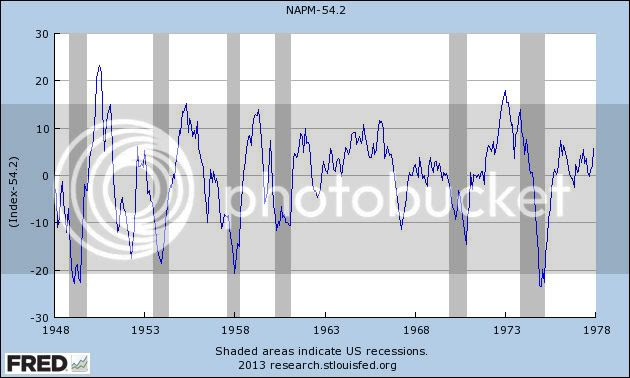 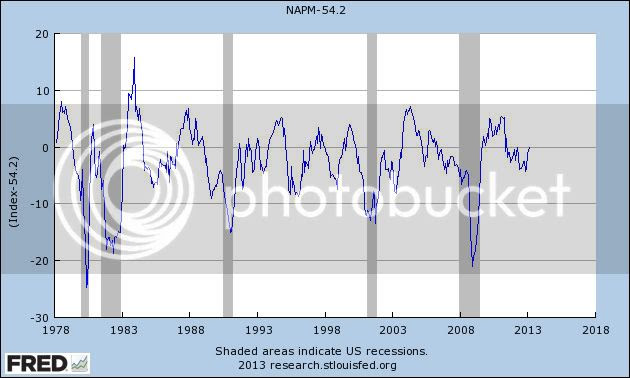 when a strongly growing US economy ran into the brick wall of the Arab oil embargo. So if a recession is starting, you can blame it squarely on ridiculous contractionary austerity coming from Washington, DC.

With the budget sequester starting today, we are living through a period that demonstrates the fallacy of relying upon economic actors to be rational. As I have pointed out numerous times in the past, the myth of rational actors conclusively shows that World War 1 never happened. Unfortunately for the world, Kaiser Wilhelm didn't get the memo.
Posted by New Deal democrat at 1:30:00 PM