A Closer Look at the LEIs

NDD is a strong advocate of the KISS method of economic analysis -- a method which I agree with.  The reality is there are a series of indicators which typically lead economic growth.  There are also those which rise and fall more or less with economic activity and those that lag.

Last week, the Conference Board release the LEIs for the US.  So, let's take a look at the numbers. 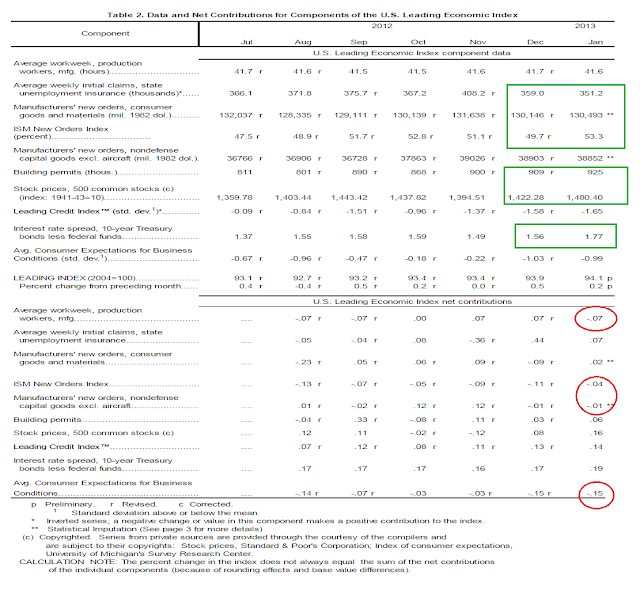 Let's look at the positive contributions to the index which are outlined in green in the top graph.  First, initial claims dropped, indicating a healing in the employment statistics.  In addition, we see positive contributions from the manufacturing numbers.  Remember that industrial production is a coincident indicator; for that number to rise the sector needs new orders.  Hence, their inclusion as a leading number.

Building permits increased -- telling us the housing sector continues to heal (albeit from a very low level).  And stock prices increase.  Finally, the yield spread increased, telling us the risk on trade increased in significance.

Let's look at the accompanying comments to gain more insight:

Says Ataman Ozyildirim, economist at The Conference Board: “The U.S. LEI rose again in January, pointing to a slow but continued expansion in economic activity in the near term. Despite continued weakness in manufacturers’ new orders and consumer expectations, improvements in housing permits and financial components helped boost the LEI in January. Meanwhile, the CEI also advanced in January, despite the slight decline in industrial production. Both the LEI and CEI have experienced widespread gains among their components over the past six months.”

Says Ken Goldstein, economist at The Conference Board: “The indicators point to an underlying economy that remains relatively sound but sluggish. Credit use has picked up, driven in part by relatively strong demand for auto loans. The biggest positive factor is housing. The housing market is now at twice the level reached during its recessionary lows, and will likely continue to improve through the spring, delivering some growth momentum to the labor market and the overall economy. The biggest risk, however, is the adverse impact of cuts in federal spending.”

First, the expansion is expected to be "slow but continued."  This is in line with most economists.  Remember that we have a backdrop of a high unemployment which will diminish aggregate demand, lowering growth.

Both economists noted the strength in the housing market, which started to rebound about a year ago.  While it is still rising from low levels, the numbers and indicators are still rising.

Also note the new orders for manufacturers played a big role in the numbers.

Finally, the biggest problem is the negative impact of cuts in federal spending.