The number of unemployed persons, at 12.3 million, was little changed in January. The unemployment rate was 7.9 percent and has been at or near that level since September 2012. (See table A-1.) (See the note and tables B and C for information about annual population adjustments to the household survey estimates.)

Just like the last few months, we've added some jobs,  but nowhere near enough to make a meaningful dent in long-term unemployment.  Here's a chart from the report:

The unemployment rate has stalled at right below 8% for the last five months.  Put another way, we're treading water.

Here is the hours worked and wage data:

The change in total nonfarm payroll employment for November was revised from +161,000 to +247,000, and the change for December was revised from +155,000 to +196,000. Monthly revisions result from additional reports received from businesses since the last published estimates and the monthly recalculation of seasonal factors. The annual benchmark process also contributed to these revisions.

There's good news and bad news above.  The good news is we see some impressive revisions to November's and December's number.  There is also a decent one month bump in hourly earnings.  The bad news the average workweek for all employees was unchanged while the workweek for manufacturing edged down.


Finally, we did get the following revisions to last year's data: 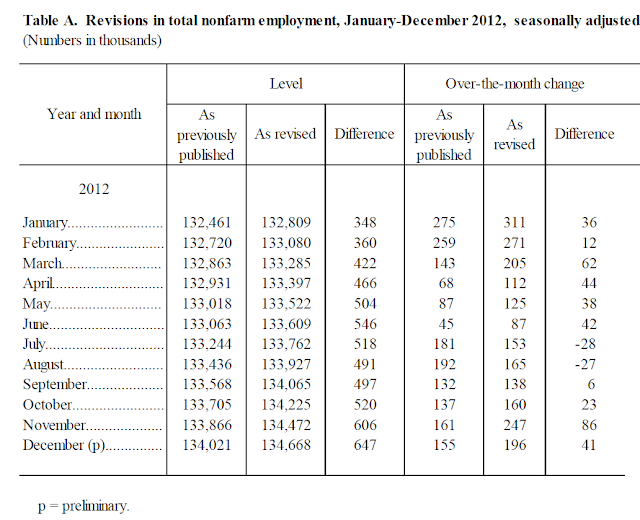 Bottom line, nothing has meaningfully changed regarding employment.

As I typically do, let's first look at the more forward-looking indicators in the report, which tell us where we are likely to go from here.  These contained several negative surprises:

-  The manufacturing workweek declined 0.1 hour.  This is one of the 10 components of the LEI.  Overtime was flat at 3.3 hours.

-  8100 temporary jobs were lost.  If anything, these have a positive secular bias.  We've now had two negative months in a row, so this is a cautionary sign.

-  The number of workers unemployed for 0 - 5 weeks, a more forward looking indicator than initial jobless claims, increased by 90,000. This is the second large increase in a row, and is another cautionary sign.

On the other hand,

Important coincident data includes the index of aggregate hours, which measures the total number of working hours in the economy, which increased 0.1.

Another very important item is that average hourly earnings increased $.04 to $23.78.  They are up 2.1% YoY which is higher than the most recent inflation rate.  In other words, for the first time in 2 years, Joe Sixpack's real, inflation adjusted wages are increasing.  Too bad he just took a 2% cut in take home pay due to the increase in tax withholding.

Other data stayed at trend.  The employment to population ratio was flat at 58.6%.  The broad U-6 measure of unemployed was also flat at 14.4%.  Government shed 9000 jobs.

Finally, the revisions to the 2012 and earlier reports substantially change what was reported previously (although the BLS told us this was coming half a year ago). As of March 2012, the BLS added 422,000 jobs to previous reports. From April to December 2012, another 224,000 jobs were added, including upward revisions of 86,000 to November and 41,000 to December. This means that the total number of jobs added to the economy in 2012 actually exceeded those added in 2011. This makes the jobs recovery since the bottom of the recession in June 2009 significantly better than we thought it had been. But this is in the past.

My bottom line: the picture in the rear view mirror looks substantially better than it did before, thanks to the revisions to 2012 and earlier data.  The coincident data is ok, but not better.  The forward looking leading data for January was negative.
Posted by Unknown at 7:54:00 AM