Guess What? Austerity Doesn't Work in the US Either

Real gross domestic product -- the output of goods and services produced by labor and property located in the United States -- decreased at an annual rate of 0.1 percent in the fourth quarter of 2012 (that is, from the third quarter to the fourth quarter), according to the "advance" estimate released by the Bureau of Economic Analysis.

In the third quarter, real GDP increased 3.1 percent.The decrease in real GDP in the fourth quarter primarily reflected negative contributions from private inventory investment, federal government spending, and exports that were partly offset by positive contributions from personal consumption expenditures (PCE), nonresidential fixed investment, and residential fixed investment.  Imports, which are a subtraction in the calculation of GDP, decreased.

Let's look at a chart that shows the percentage change in GDP and the contributions to that change: 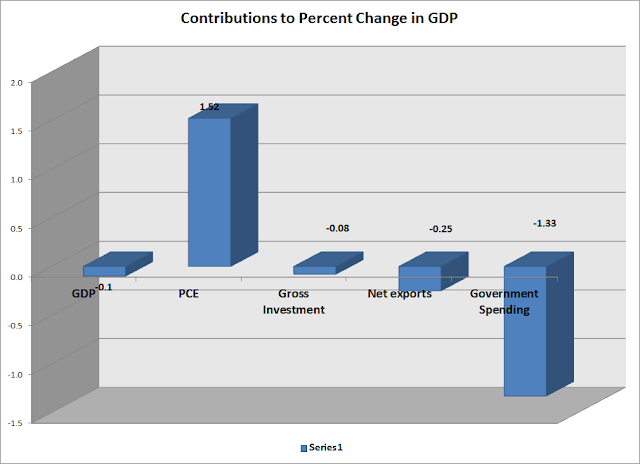 Oh look -- government spending dropped 6.6%, with a drop of 15% at the federal level and a 22% drop in defense spending.  And look what happened to overall GDP -- it contracted slightly.  Imagine that.  Where have I heard this argument before?