Despite the common belief that a recession is defined by two consecutive quarters of economic contraction, in fact the official arbiter of business cycles, the NBER, defines it as a pronounced and sustained downturn in production, sales, income, and employment. Measured by that yardstick, and subject to revisions as always, as of now there is no question that there was no recession in 2012. Production, sales, income and employment all finished at their highs for the year.

Here is an update of the graph I ran several weeks ago, in which the four coincident indicators of industrial production (blue), real retail sales (red), real personal income minus transfer receipts (green), and payrolls (orange), are normed to 100 at their previous highs in July: 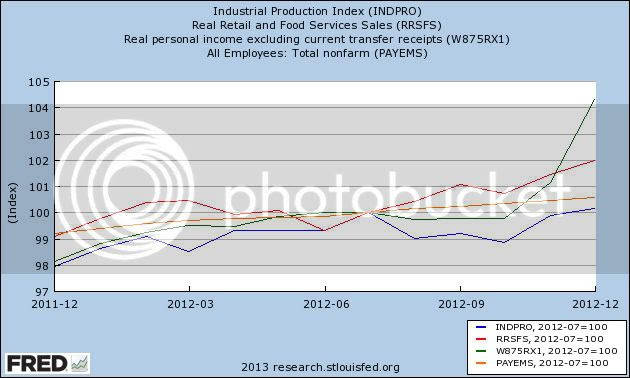 As you can see, all four have made new highs as of December. In short and simple terms, no recession.

At least one prominent forecasting firm prefers to make use of real manufacturing and trade sales rather than real retail sales. Those were updated through November this morning, and those too made a new high (h/t Doug Short): 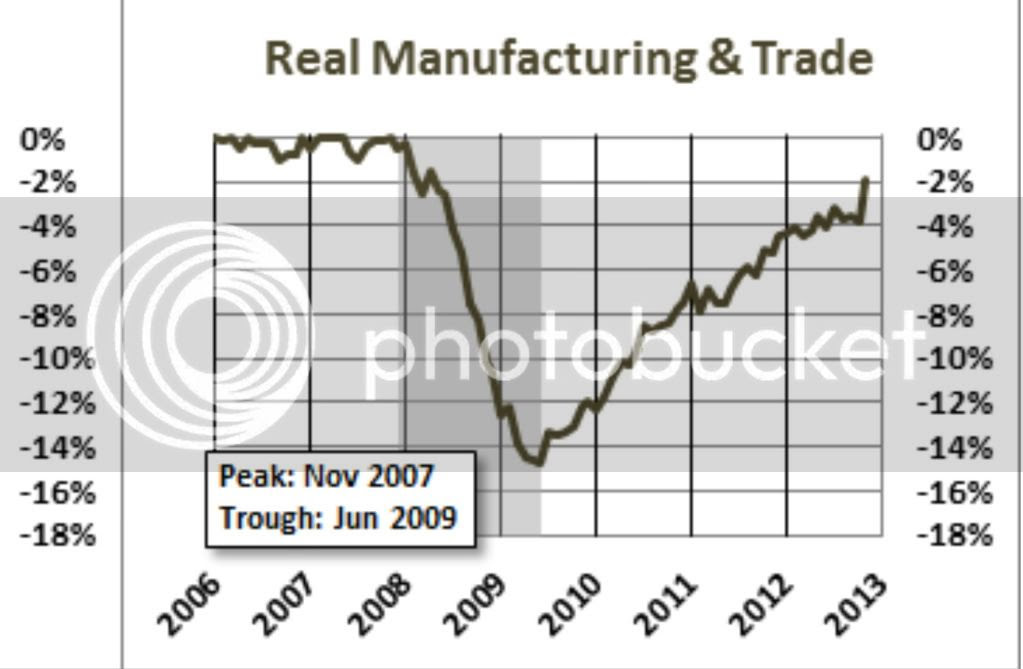 But what of yesterday's -0.1% GDP print? If it truly is a one-off negative due to the biggest reduction in military spending in 40 years, then it is meaningless in terms of the state of the underlying economy.

The more interesting, if depressing, question is, what if the 2% reduction in take home pay, plus policy mistakes such as the impending sequestration, cause this quarter to be another, consecutive period of contraction? Then it is at least possible that the NBER will pick December as the peak of business activity, and date any recession from that month.

But unless there are significant downward revisions, that will most certainly not be a vindication of those who said we were entering a recession "now" in September 2011, then most likely in the first quarter of 2012, then by midyear 2012, and then in July 2012.
Posted by New Deal democrat at 2:00:00 PM