The UK began implementing it's austerity program in 2010, under the theory that rampant budget deficits were destroying public confidence in the UK economy.  Therefore, the reasoning goes, if the UK cleaned up their fiscal act, the economy would return to full employment.

Here is a pie graph of UK spending for the years 2010-2012 which comes from the publicly available budget documents at the HM Treasury's website. 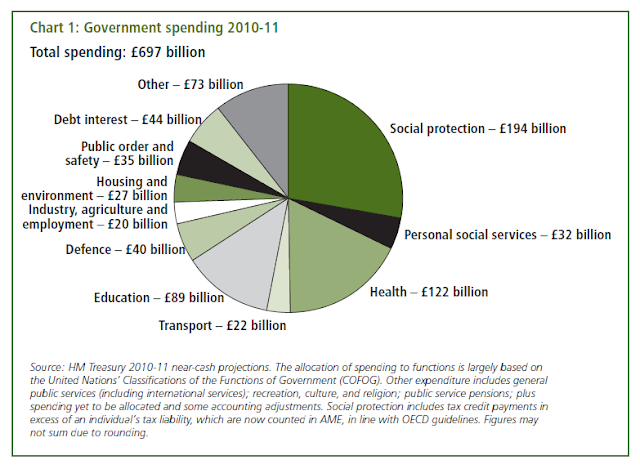 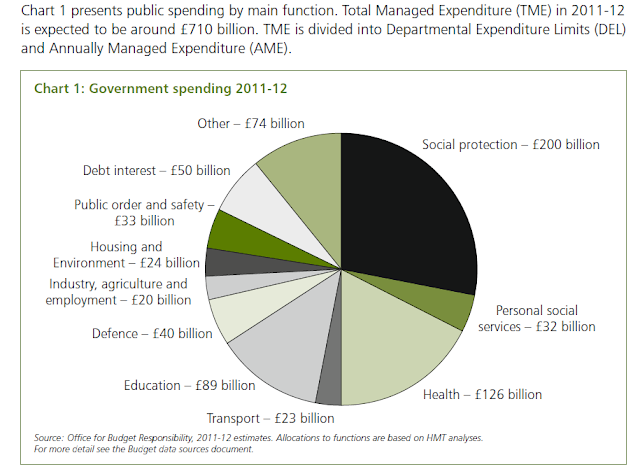 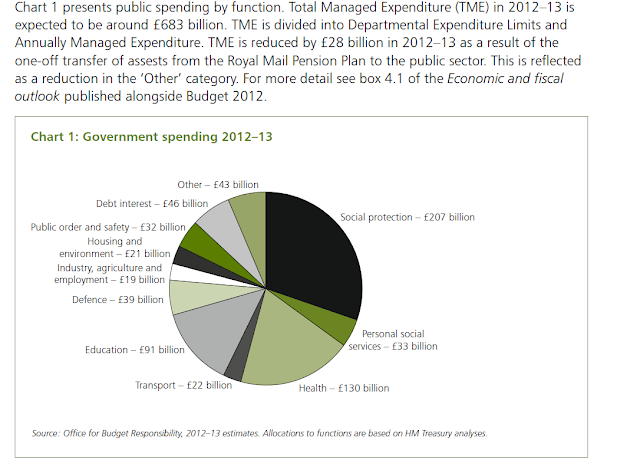 Over the same period, we see the following GDP figures: 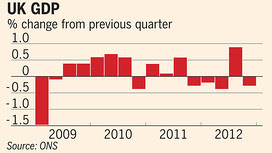 In the fourth quarter of 2010, we see a contraction.  In fact, since 4Q10, there have only been three quarters of positive economic growth.  As the Financial Times Reported:

The economy, which has essentially stagnated for 2½ years, pulled out of a shallow double-dip recession in the third quarter of 2012, but contracted again between the third and the fourth quarter by more than the expected 0.1 per cent. The economy was the same size in the fourth quarter as it was a year earlier.
“It remains too early to tell if the economy will triple-dip [which would require the economy to shrink again in the first quarter of this year], but today’s numbers have greatly increased the risk of a new recession and a downgrading of the UK’s triple A credit rating,” said Chris Williamson, an economist at Markit, a data company. “As such, the data pile ever more pressure on the chancellor to seek ways to revive the economy in the March Budget.”

As a result of this slow growth, the IMF is advising the UK to halt austerity measures:

The IMF chief economist has told the BBC that Chancellor George Osborne should consider slowing down austerity measures in his March budget.

"We think this would be a good time to take stock," said Olivier Blanchard, speaking to Radio 4's Today programme.

He also said the global economy was "not out of the woods yet".

In October, Mr Blanchard claimed in an IMF report that austerity had hurt wealthy countries such as the UK far more than most analysts had expected.

His comments come the day after the IMF cut its 2013 forecast for UK economic growth to 1% from the 1.1% predicted in October, and will put pressure on the chancellor as he prepares to deliver a speech at the World Economic Forum in Davos later on Thursday.

The IMF is making this recommendation, largely because they have now determined that the multiple associated with government spending is in fact far larger than they originally calculated.

In “Growth Forecast Errors and Fiscal Multipliers,” Messrs. Blanchard and Leigh calculate IMF and European economists underestimated the euro-for-euro effect of cutting government budgets. While economists expected that cutting a euro from the budget would cost around 50 cents in lost growth, the actual impact was more like 1.50 per euro.

Put another way, for every dollar cut ($1) the economy loses about $1.5 of growth.  This is entirely in line with the general thinking mentioned in my old (and very torn) Paul Samuelson Econ text from college.