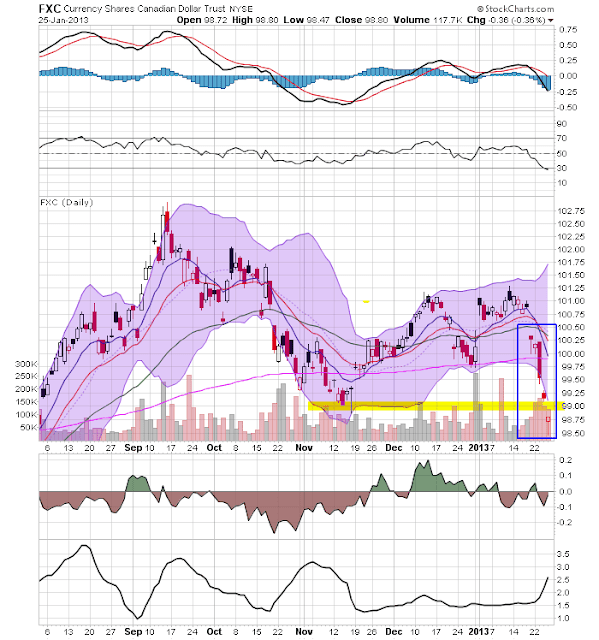 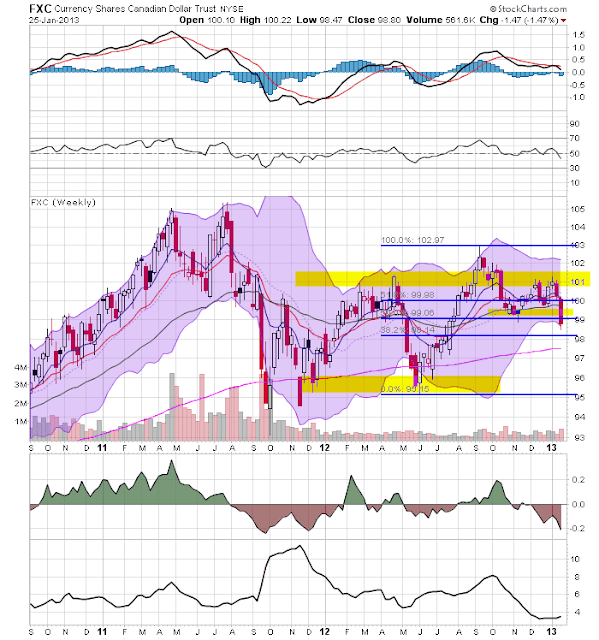 The daily chart of the Canadian dollar (top chart) shows that last week prices dipped sharply, falling from ~101.75 to ~ 98.75, or a drop of a little over 3%.  Over the same period, prices fell through all the EMAs and are now in bear market territory.  On the weekly chart (bottom chart), notice that the upper 90s provide important technical support for the currency, with the next logical price target being the 38.2% Fib level from the mid-2012, fall 2012 rally.  Also note the declining MACD and CMF reading on this chart as well.  In short, it appears as though the Canadian dollar has suddenly switched to a bear market.  The question is, why?

Last week, the Canadian Central Bank stated it would keep interest rates at 1%.  More importantly, consider the following statements issued in conjunction with that announcement:

In Canada, the slowdown in the second half of 2012 was more pronounced than the Bank had anticipated, owing to weaker business investment and exports. Caution about high debt levels has begun to restrain household spending. The Bank expects economic growth to pick up through 2013. Business investment and exports are projected to rebound as foreign demand strengthens, uncertainty diminishes and the temporary factors that have weighed on resource sector activity are unwound. Nonetheless, exports should remain below their pre-recession peak until the second half of 2014 owing to a lower track for foreign demand and ongoing competitiveness challenges, including the persistent strength of the Canadian dollar.  Consumption is expected to grow moderately and residential investment to decline further from historically high levels. The Bank expects trend growth in household credit to moderate further, with the debt-to-income ratio stabilizing near current levels.

Core inflation has softened by more than the Bank had expected, with more muted price pressures across a wide range of goods and services, consistent with the unexpected increase in excess capacity. Total CPI inflation has also been lower than anticipated, reflecting developments in core inflation and weaker-than-projected gasoline prices. Total CPI inflation is expected to remain around 1 per cent in the near term before rising gradually, along with core inflation, to the 2 per cent target in the second half of 2014 as the economy returns to full capacity and inflation expectations remain well-anchored.

Reflecting all of these factors, the Bank has decided to maintain the target for the overnight rate at 1 per cent.  While some modest withdrawal of monetary policy stimulus will likely be required over time, consistent with achieving the 2 per cent inflation target, the more muted inflation outlook and the beginnings of a more constructive evolution of imbalances in the household sector suggest that the timing of any such withdrawal is less imminent than previously anticipated.

To translate:
Put more succinctly, the Canadian economy is under pressure from both international and domestic pressures, leading to a lower growth situation.