A Quick Note on the Durable Goods Report From Yesterday

Yesterday we learned that US durable goods increased by 4.6% -- a good number.  Ex transportation and an defense expenditures, we still saw increases.  The report noted we've seen increases in seven of the last eight months.  This is technically true.  However, consider the following charts: 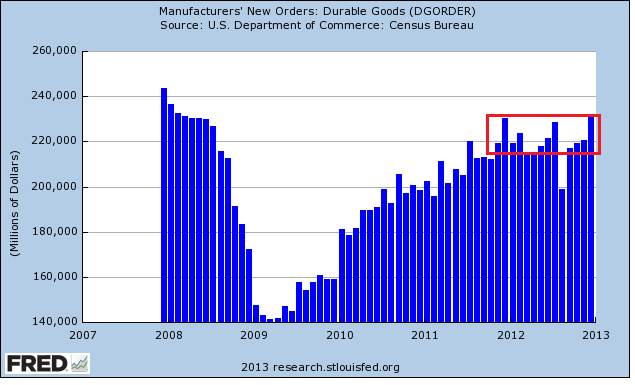 On the 5 year chart, we see more of a general plateau in orders over the last year.  And while yesterday's spike in orders could be the harbinger of a new upswing in orders, consider we're seen similar upswings twice in the last few 12-14 months, only to be disappointed.  Also ask yourself -- who would account for the increase in orders?  Japan, the UK and the EU are all in a recession or operating at very slow rates.  That leaves China, which is still growing but may not be large enough to sustain a continued increase.

Consider the lat year's worth of data: 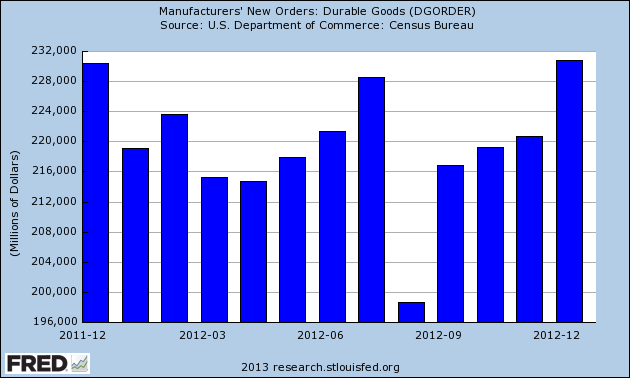 Yes, there have been increases.  But you could also make an argument that orders have coalesced around the 220-224 level with the exception of the 08/12 drop.

Also note this is occurring at a time when US manufacturing is sending mixed signals.  First note the latest Markit report (h/t Sober Look):

The U.S. manufacturing sector is showing signs of regaining momentum as the year comes to a close. Producers reported the largest monthly increase in output since April, with the rate of growth picking up for the third month in a row, suggesting output is now growing at an annualised rate of around 4% compared to the contraction seen back in October.

Such a steady run of improved growth of production is a good indication of a turning point in the economy as a whole, especially as it is feeding through to higher employment. The manufacturing sector has been acting as a drag on the official payroll numbers in recent months, but this situation looks to be changing as firms take on increasing numbers of workers in line with fuller order books.

But in contrast to the Markit report, we're still seeing weakish readings from various regional surveys.  The Empire State index is at -7.8, the Richmond Fed's index is at -12, the Philly Fed's index is at -5.8, and Texas' is at 12.9.  These are not strong numbers, nor are they very encouraging.

Put another way, we need more data to determine if this is the beginning of a new upswing in orders, or simply a strong move higher that will eventually disappoint (again).