At the beginning of this year, I wrote the following about the market:

1.) The equity market is at a key technical area.  It has rallied to this point from its 2009 low on three rallies, each of decreasing strength.  Prices have stalled at the 140 level for the last four months.  This is occurring against a weakening momentum picture.

2.) Instead of moving into equities, investors have plowed money into bonds -- both treasury and corporate.  This has led to a lowering of the yield curve across the spectrum.

3.) The fundamental background is weak.  Although it's expanding, the economy is very sensitive to shocks.  Additionally, we now have a debt ceiling negotiation to deal with, which will be contentious, ugly and probably won't solve any problems.

4.) Internationally, we see a great deal of weakness as well.  The only bright spot is a recent rally in the Chinese market.

In short, there is little to think the equity markets can rally strongly at this point, save for a "China will save us all" rally.

However, the SPYs have rallied since the beginning of the year. 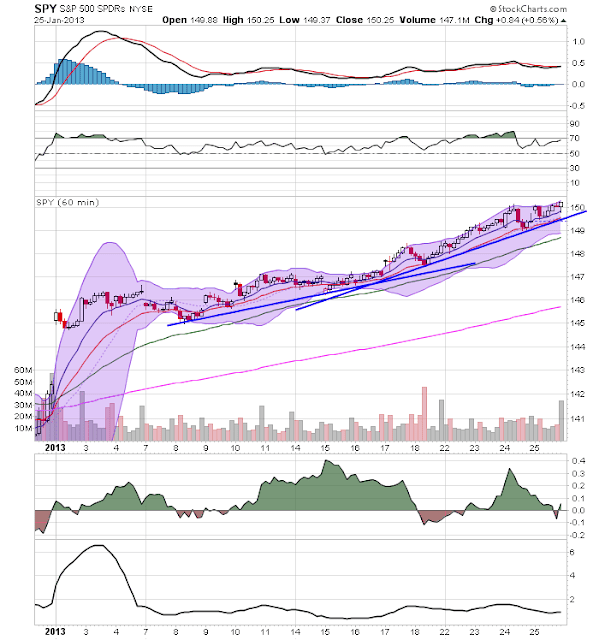 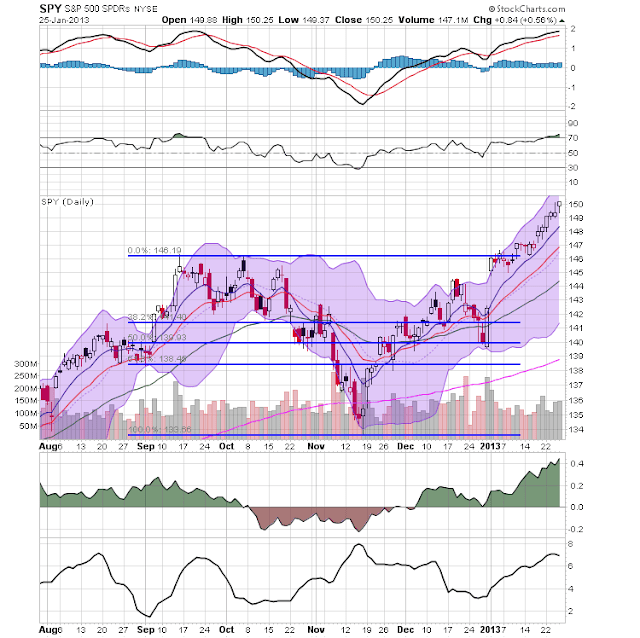 The 60 minutes chart (top chart), shows that prices gapped higher at the beginning of the year in response to the fiscal cliff compromise.  Prices have continued to move higher as corporate earnings have come in.  The daily chart (bottom chart) shows that prices have broken through resistance around the 146 level, and have continued to move higher, using the 10 day EMA as technical support.  This has been accompanied by a rise in the MACD and CMF.

This move higher has been confirmed by two other averages: 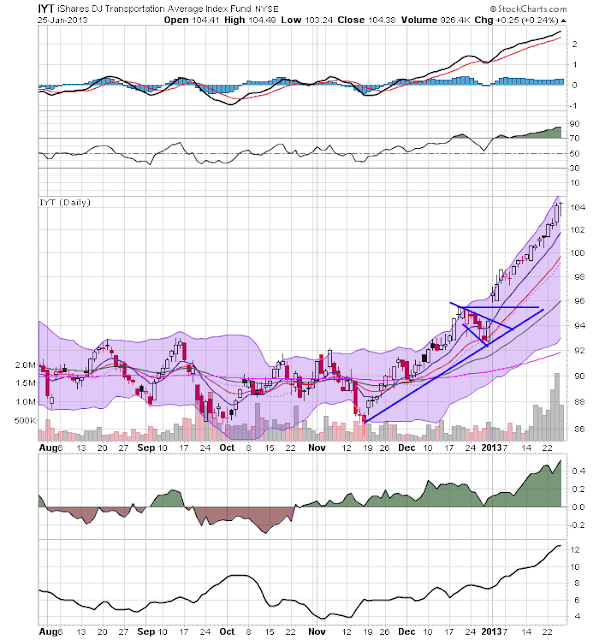 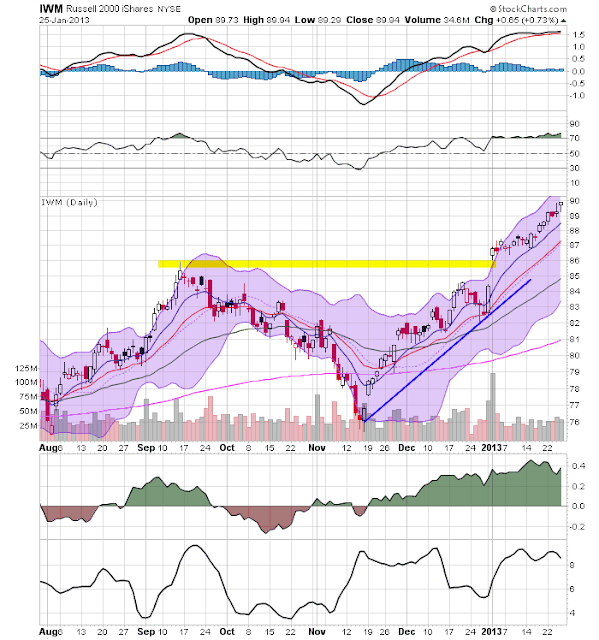 Both the transports (top chart) and Russell 2000 (bottom chart) have followed the SPYs higher. 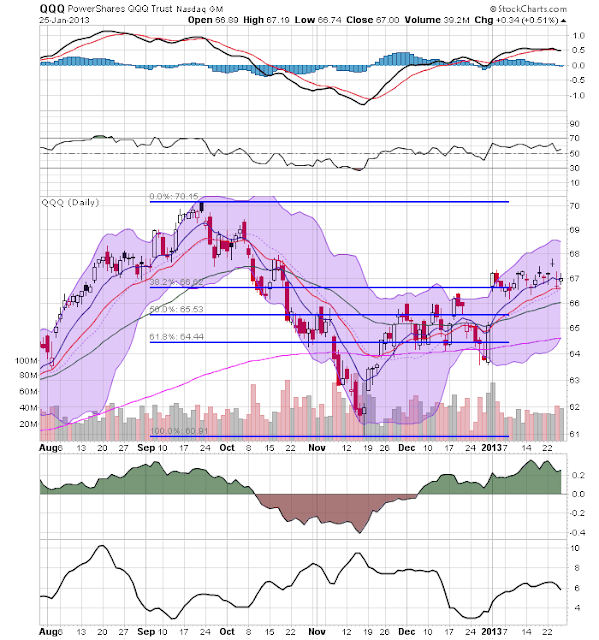 In contrast, we have the QQQs, which have been moving sideways since the beginning of the year.

The lack of upward movement from the QQQs is not fatal to the idea of the broader markets rallying.  However, it does raise a red flag regarding the strength of the overall rally, as one of the largest segments of the economy (technology) is not participating.  Let's look in a bit more detail at the market internals: 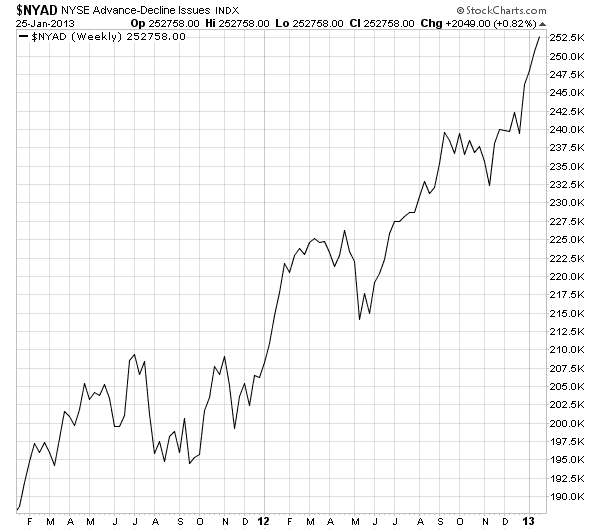 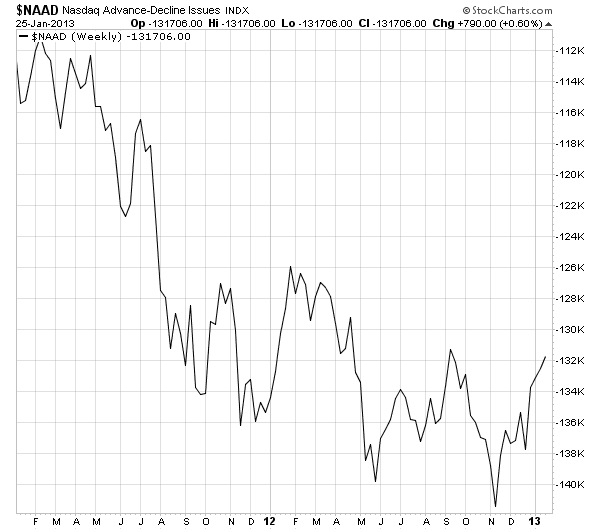 The NYSE breadth has been increasing for the better part of the last few years (top chart).  However, the NASDAQ breadth was in in overall rate of decline from 2012.  While it has rallied since November, it has rallied to a point of resistance that is carried over from 2012. 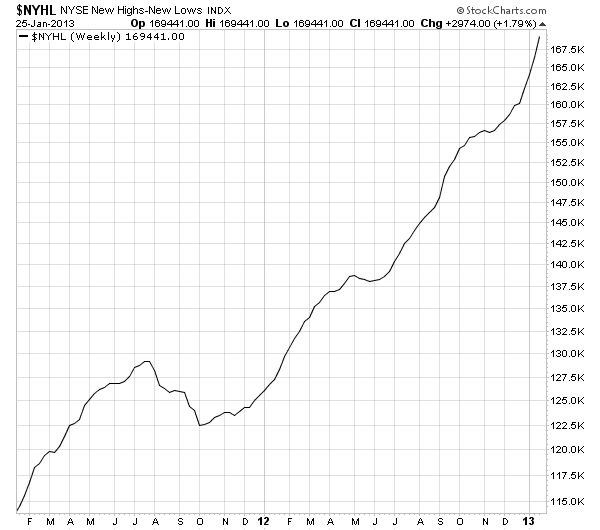 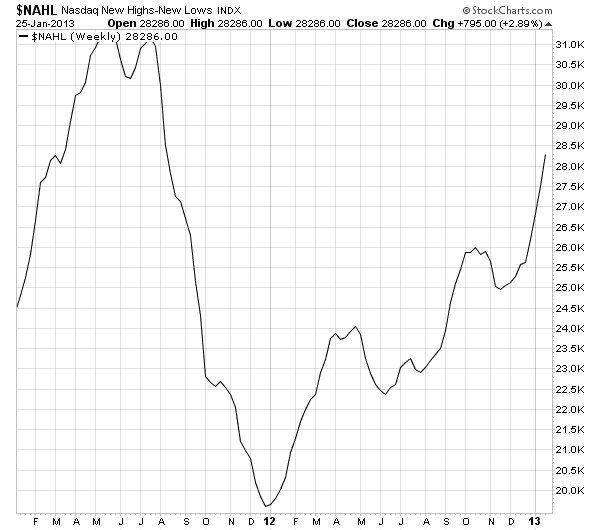 However, we see a different picture from the high low chart.  Both the NYSE (top chart) and NASDAQ high low charts show a clear uptrend.

On the more negative side, we have the NASDAQ and S&P 500 charts of stocks that are over the 200 week EMA.  Notice that both are at high (read overbought) levels).

In addition, we have this chart from Bespoke: 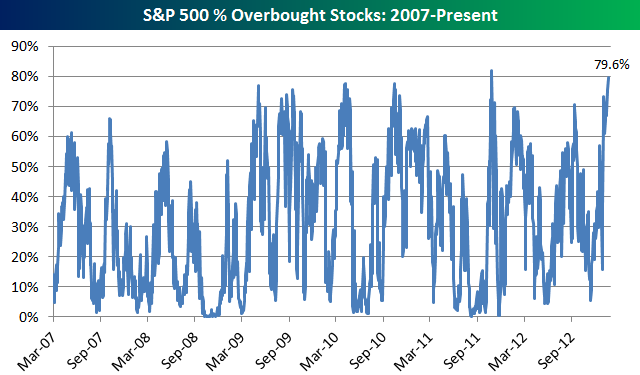 Given the above information, it appears that the bullish argument is starting to make some sense.  However, the QQQ situation (lack of movement, weak advance decline line), the number of stocks over the 200 day EMA and the chart above from Bespoke add enough negative information to give me pause.   And, there is this front page cover indicator from Barry that is also a bit halting (see also this from Sober Look).   Before we make a final call, let's look at three other areas: a sector performance breakdown of the SPYs, a look at the bond markets and an overview of the US economy's projected performance for the upcoming year.  I'll cover those on Tuesday, Wednesday and Thursday, respectively.