Weekly Indicators: April ends in a sea of green edition

In the rear view mirror, first quarter GDP was reported preliminarily at +2.2% on an annualized basis.  This was below expectations.  The biggest negative was government spending on all levels including a marked decrease in military spending due to the end of the war in Iraq.  This was still positive enough to push YoY GDP back above 2.0%.  Durable goods orders, a leading indicator, came in strongly negative, although this is a volatile series.  This in part appears to be an inventory correction.  Case Shiller home prices continued to decline YoY, but the m/m change in the seasonally adjusted data was positive.

Fittingly for April, the high frequency weekly indicators this week were a sea of green with a few yellows from unwanted data dandelions. Housing and employment continued to be the most significant areas.

The Mortgage Bankers' Association reported that the seasonally adjusted Purchase Index increased -2.7% from the prior week, and were flat YoY. The Refinance Index reversed part of its huge gain from the prior week, falling -5.6%.This index is at the upper end of its 2 year generally flat range. Because the MBA's index was substituted for the Federal Reserve Bank's weekly H8 report of real estate loans in ECRI's WLI, I've begun comparing the two. This week for the fourth week in a row after 4 years of relentless decline, real estate loans held at commercial banks were up, +1.0% on a YoY basis. On a seasonally adjusted basis, these bottomed in September and are now up +1.7%.

YoY weekly median asking house prices from 54 metropolitan areas at Housing Tracker were up +3.7% from a year ago. YoY asking prices have been positive now for close to 5 months. This week Case Shiller reported only the second month-over-month gain in housing prices in 5 years, excepting the months of the $8000 housing credit. For the last few months my mantra on house prices has been "something's gotta give." Either the list prices indexes (showing gains) or the repeat sales indexes (showing losses) had to turn. Right now it looks like the list price indexes which are being vindicated.

Two of the three Employment related indicators were positive, while the third was strongly negative, appearently due to a seasonality issue:

The Department of Labor reported that Initial jobless claims rose another 6,000 to 388,000 last week, the highest report since January. The four week average also rose by 6250 to 374,750. For the third week in a row, this is mirroring the big increase in April last year. In fact, for the entire last year the YoY% decrease in initial claims has been between 8% and 12%. So long as we stay in that range, I am satisfied that we are seeing a quirk of seasonality rather than a more ominous sign. Here is a graph highlighting in red the possible unadjusted second quarter seasonality for the last two years: 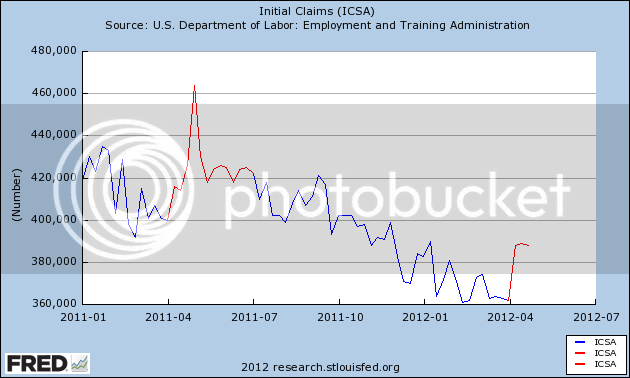 The American Staffing Association Index rose one more point to 91. It is rising and continues to remain close to its pre-recession readings of 2007. It is possible that it could exceed all readings but those of 2006 by June sometime.


The ICSC reported that same store sales for the week ending April 21 rose+0.8% w/w and +3.6% YoY. Johnson Redbook reported a 2.7% YoY gain. Shoppertrak did not report. The 14 day average of Gallup daily consumer spending remained favorable at $74 vs. $64 in the equivalent period last year.

Bond prices fell (a positive) and credit spreads were flat:

Rail traffic was mixed, with the same explanation as for the last month:

The American Association of Railroads reported a +0.6% increase in traffic YoY, or +3000 cars. Ex-coal, overall traffic was up by 22,500 cars, or +3.6% YoY. Intermodal traffic was up 12,600 carloads, or +6.0%.  Railfax's graph of YoY traffic continued to show that rail hauling of cyclically sensitive materials remains in strong improvement.

Gasoline prices fell for the second straight week, down .05 to $3.87. Oil rose to $104.93. Both of these remain above the point where they can be expected to exert a constricting influence on the economy. Gasoline usage, at 8496 M gallons vs. 9148 M a year ago, was off -7.1%. The 4 week moving average is off -4.2%. Since one year ago gasoline usage was beginning its big decline, these are actually relatively negative numbers.

The high frequency indicators for the global economy also were positive:

Finally, the JoC ECRI industrial commodities index rose strongly from 122.31 to 124.96. This indicator appears to have more value as a measure of the global economy as a whole than the US economy.

With one exception, the high frequency indicators give no hint of any meaningful deterioration in the economy.  To the contrary, the lion's share were positive.  The Oil choke collar remains engaged, and the non-winter winter and the quest for energy efficiency are affecting several areas of rail loads.  The only true negative comes from initial jobless claims, and the evidence there is that there is a seasonal issue (either due to the Oil choke collar or left over from readings during the recession) that is responsible.
Posted by New Deal democrat at 8:00:00 AM