UK In Technical Recession; Or, No REALLY, Austerity is an Incredibly Stupid Idea

I wrote the first 1/2-2/3 of this story over the weekend,hence the reason for the somewhat backwards presentation of material.  The GDP graphs do not include the latest information.  However, it goes without saying (so I'll go ahead and say it), yet another country is learning a lesson the hard way.

It's another successful austerity program!

From the April 4-5 meeting minutes of the Bank of England:


According to the third ONS estimate, GDP had fallen by 0.3% in the fourth quarter of 2011, 0.1 percentage points weaker than reported in the second release. The ONS had also revised down the path for household consumption during 2011 such that the level at the end of the year was 0.5% lower than previously estimated. Together with an upward revision to households’ income, this implied a sizable revision upwards to the estimated household saving rate. This now appeared to have fallen back only modestly since its peak in 2009.

The top chart shows total GDP, which is still below pre-recession levels.  Also note there were two years of decline (2009 and 2010) with a slight increase in 2011.  The second chart shows the quarter to quarter growth, which shows that in three of the last give quarters UK GDP has shrunk.

The good news in the above statement is the increased savings rate which means two things going forward:

1.) Consumers have increased spending power if they choose to use it, and
2.) The deposit base is increasing, which increases bank reserves.  This can lead to an increase in overall credit, assuming there is an increase in demand.


In line with the usual pre-release arrangements, the Governor informed the Committee that manufacturing output had fallen by 1% in February and that output in January had been revised down. This was somewhat at odds with the more positive message from the corresponding business surveys. The data on service sector output in January were consistent with solid growth in services in the first quarter of 2012. The CIPS/Markit indices for manufacturing, services and construction had all risen in March and the composite expectations balance had reached its highest level in over a year. The BCC Quarterly Economic Survey had recorded rising sales balances for both manufacturing and services in the first quarter. And the Bank’s Agents had reported a broad-based, if still modest, pickup in output growth over the previous three months. Consistent with these reports, household and corporate broad money growth had increased in January and February on a three-month annualised basis.

The above chart shows the YOY percentage change in UK Industrial production, which has been negative for the few months.  The divergence between the Markit survey and IP numbers can be explained by looking at the internals of the Markit report: 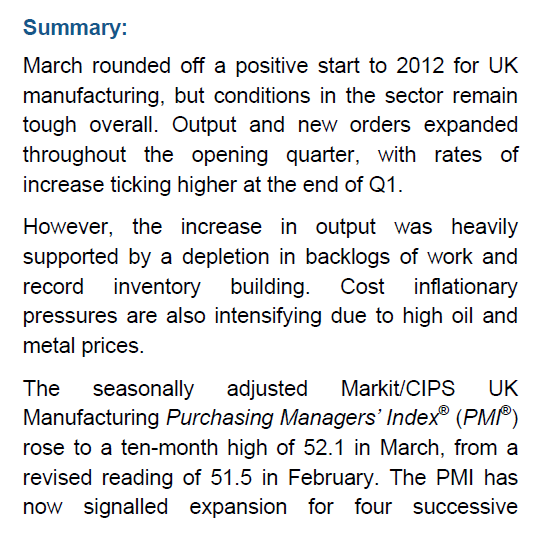 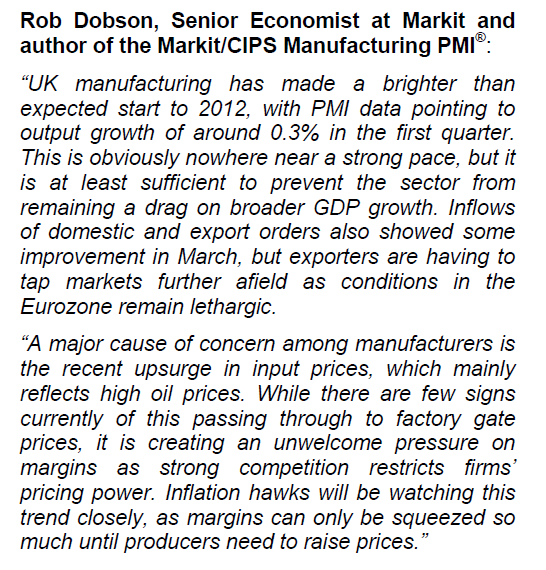 In short, UK manufacturing increased because it filled old orders and replenished inventories.  In addition, the UK's primary market -- the EU -- is slowing down.  The Market economists comments highlight the basic conclusion to draw: manufacturing won't be a drag, but nor will it be a strong contributor to the economy in the first quarter.


For the second month in a row, the ONS had reported a particularly large contraction in construction output, which it estimated to have fallen by around 12% in each of December and January on a non-seasonally adjusted basis. Even if activity were to rise strongly in February and March, measured construction output was likely to show a very sharp fall in the first quarter as a whole. This was at odds with other indicators of construction activity from CIPS/Markit, Experian and the Bank’s Agents, which had generally pointed to much smaller declines around the turn of the year. Although construction orders had been weak, the Construction Products Association was expecting only a modest reduction in output during the year as a whole.

Here are the relevant data points from Markit: 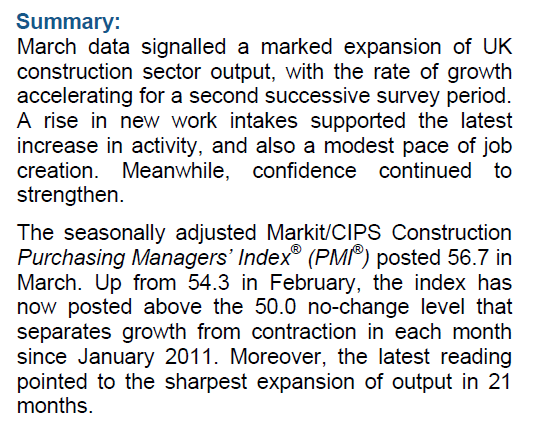 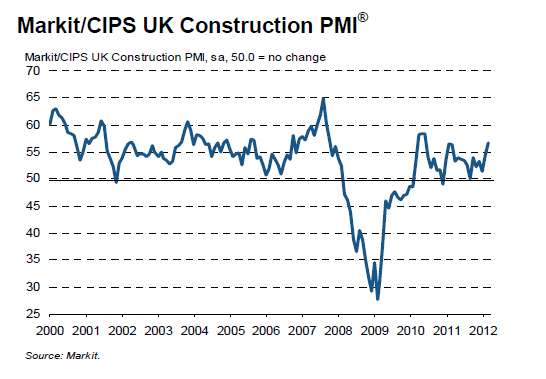 Only time will tell who is right.  However, an increase in construction spending would be most welcome as this has an ancillary economic effect down the line.


In the absence of revisions to the latest vintage of data, the contraction in measured construction output was likely to depress measured GDP growth significantly in the first quarter. Indeed, it was possible that the ONS’s preliminary estimate for GDP could record a fall in aggregate output. In the second quarter, some activity was likely to be lost because of the extra bank holiday associated with the Queen’s Diamond Jubilee celebrations. With output having already contracted in the fourth quarter of last year, the Committee could not rule out the publication of official data showing GDP falling for three successive quarters. Nevertheless, the Committee’s judgement was that, abstracting from both the puzzling weakness in measured construction output and the impact of one-off factors, the economy appeared likely to be expanding, albeit only modestly, in the first half of the year

And now, just to add the icing on the cake, we learn that the UK is in a technical recession (from the office of national statistics)
As explained by Reuters:


Britain's economy has fallen into its second recession since the financial crisis after an shock contraction at the start of 2012, heaping pressure on Prime Minister David Cameron's government as it reels from a series of political missteps.

Britain's Conservative-Liberal Democrat coalition has seen its support crumble after weeks of criticism over unpopular tax measures in last month's budget, and is under further pressure from revelations about its close links with media tycoon Rupert Murdoch.

With local elections taking place on May 3, there could hardly be worse timing for Wednesday's news from the Office for National Statistics that Britain's gross domestic product fell 0.2 percent in the first quarter of 2012 on top of a 0.3 percent decline at the end of 2011.

Most economists had expected Britain's economy to eke out modest growth in early 2012, but these forecasts were upset by the biggest fall in construction output in three years, coupled with a slump in financial services and oil and gas extraction.

For a good summation of the report and what this means, here is a link to the FT Money Supply Blog