Is the US/China Trade Balance Stabilizing? 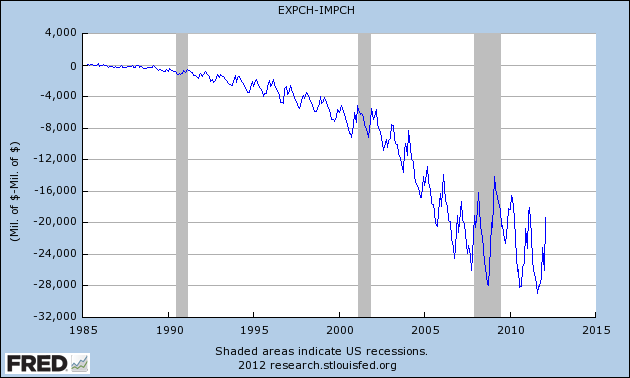 The above chart is simply US exports - Chinese imports.  What's interesting is that it appears to have three stages:

It's still too early to make a firm conclusion from the data.  It's also important to remember that the US economic position for the last three years has fundamentally changed to one of slow growth and lower consumerism.  However, consider that Chinese labor is no longer cheap:

But while China’s industrial subsidies, trade policies, undervalued currency and lack of enforcement for intellectual property rights all remain sticking points for the United States, there is at least one area in which the playing field seems to be slowly leveling: the cheap labor that has made China’s factories nearly unbeatable is not so cheap anymore.

China has experienced sporadic labor shortages, which in turn have driven up its once rock-bottom labor costs. This trend is particularly evident in the weeks following China’s Spring Festival, or New Year, when more than 100 million rural migrants return to the countryside to spend the year’s biggest holiday with family. Coaxing those same migrants back into the urban work force has proven increasingly difficult.

This year has been no exception. Although nearly two weeks have passed since the Lantern Festival that officially marks the end of the 15-day holiday, cities across China are still facing a serious labor shortfall. In order to lure new workers and retain the old, some companies give employees sizable bonuses just for coming back to work, while others offer cash for every new employee they bring along with them. And in many areas, wage increases ranging from 10 to 30 percent have become the norm.

Despite all this, cities like Beijing, Shenzhen and Guangzhou are still short hundreds of thousands of migrant workers. Shandong Province is missing a full third of its migrant work force, and Hubei Province reports a loss of more than 600,000 workers. Last week, the Chinese government released a report describing this year’s post-Spring Festival labor shortage as not only more pronounced than in years past, but also longer-lasting and wider in scope.

Numerous factors underlie China’s mounting labor woes. Until now the country has been able to achieve its stunning economic growth by shifting large numbers of farmers into nonagricultural jobs. Over the past several years economists have warned that China may be reaching the so-called Lewis Turning Point — the stage at which the rural surplus labor pool effectively runs dry and wages begin to rapidly increase.

A shortage of labor means higher cost.
Posted by Unknown at 10:00:00 AM