For the past two years most policy makers in Europe and many politicians and pundits in America have been in thrall to a destructive economic doctrine. According to this doctrine, governments should respond to a severely depressed economy not the way the textbooks say they should — by spending more to offset falling private demand — but with fiscal austerity, slashing spending in an effort to balance their budgets.

Critics warned from the beginning that austerity in the face of depression would only make that depression worse. But the “austerians” insisted that the reverse would happen. Why? Confidence! “Confidence-inspiring policies will foster and not hamper economic recovery,” declared Jean-Claude Trichet, the former president of the European Central Bank — a claim echoed by Republicans in Congress here. Or as I put it way back when, the idea was that the confidence fairy would come in and reward policy makers for their fiscal virtue.

The good news is that many influential people are finally admitting that the confidence fairy was a myth. The bad news is that despite this admission there seems to be little prospect of a near-term course change either in Europe or here in America, where we never fully embraced the doctrine, but have, nonetheless, had de facto austerity in the form of huge spending and employment cuts at the state and local level.

So, about that doctrine: appeals to the wonders of confidence are something Herbert Hoover would have found completely familiar — and faith in the confidence fairy has worked out about as well for modern Europe as it did for Hoover’s America. All around Europe’s periphery, from Spain to Latvia, austerity policies have produced Depression-level slumps and Depression-level unemployment; the confidence fairy is nowhere to be seen, not even in Britain, whose turn to austerity two years ago was greeted with loud hosannas by policy elites on both sides of the Atlantic.

None of this should come as news, since the failure of austerity policies to deliver as promised has long been obvious. Yet European leaders spent years in denial, insisting that their policies would start working any day now, and celebrating supposed triumphs on the flimsiest of evidence. Notably, the long-suffering (literally) Irish have been hailed as a success story not once but twice, in early 2010 and again in the fall of 2011. Each time the supposed success turned out to be a mirage; three years into its austerity program, Ireland has yet to show any sign of real recovery from a slump that has driven the unemployment rate to almost 15 percent

Krugman has been all over this story -- he was arguing against austerity long before I started writing about it.  Plus, he is, after all, one of the premier economists on the planet.  And he's right.  The argument that confidence would return  because of budget cutting is absolute garbage.  However, let me go a bit deeper and explain why.

First, the "austerians" assume that all government spending is bad and that all private sector spending is more efficient and effective.  This is a pretty bold assumption not born out by the facts.
By way of example (and contrast), here are two charts from the Great Depression: 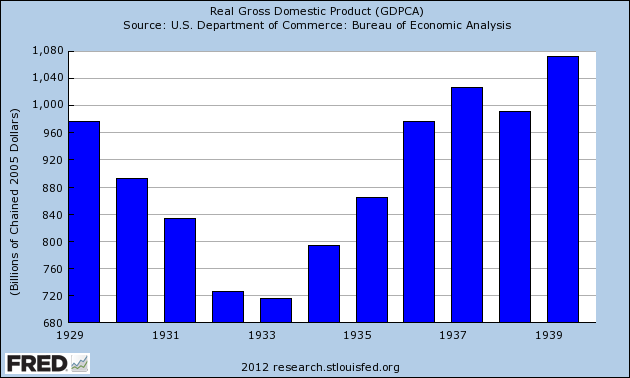 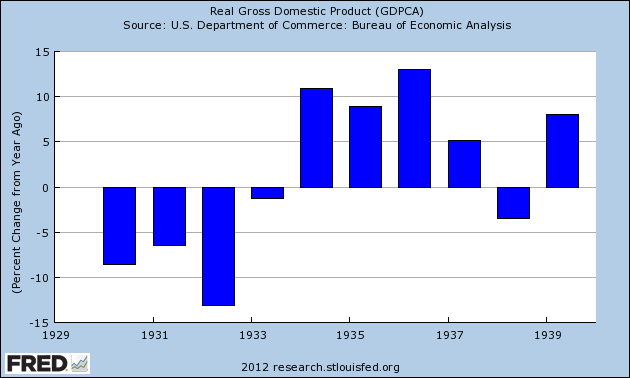 The first chart shows total, real GDP while the second shows YOY GDP growth rates.  This chart shows that by 1937, real GDP was higher than 1929 GDP largely because of the tremendous growth seen in GDP which is illustrated by the lower chart.  And - in case you're wondering -- the 1938 slowdown was caused by (drum roll please) austerity policies (you might want to read the Depression section in A Monetary History of the US by Milton Friendman to get a better idea of what happened). Many of the projects that were created during this period are still with us an paying dividends, such as Hoover Dam.

Second, as demonstrated by the recent EU and UK experience, austerity slows growth (see here and here).  This in turn creates a negative feedback loop -- lower GDP lowers demand and investment, which lowers GDP, etc...  Put another way, austerity continues to lower confidence instead of raising it because no one wants to invest in a slow growing economy.


Third, consider this chart of government spending from the CBO: 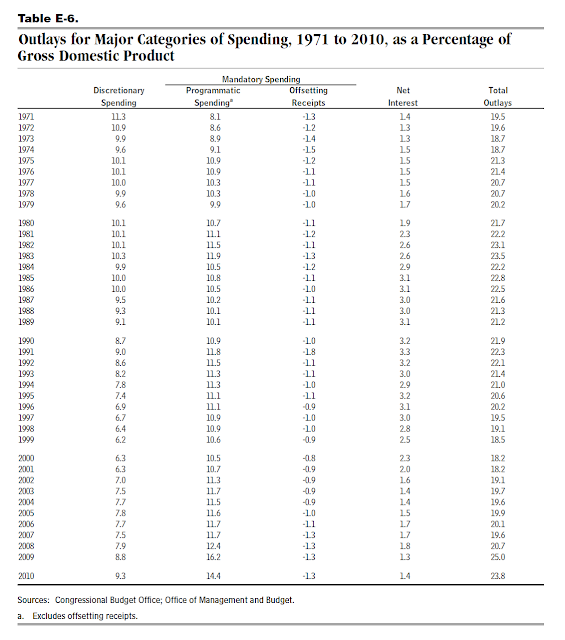 It shows government spending as a percentage of GDP going back to 1971.  Notice that this number has -- for the last 40 years -- been about 20%-21% of total GDP.  Some of this is mandatory spending some of it is discretionary.  But the point is this: it's always been there and it's a part of the economy.  This is one of the reasons I talk so much about the GDP equation (C+I+X+G=GDP), hoping that taking readers back to their days of basic math will somehow jog their memory regarding the policy implications of simple addition (which is regrettably lost on many people).

Moreover, government provides things we use on a regular basis that have short term and long term implications.  The short term implications are things like income for people in the form of social security and unemployment benefits.  People spend these on a regular basis in order to live.  Then there are less visible (but still incredibly important) things like infrastructure and educational support which have pronounced long-term benefits for the country by bolstering and developing the physical and personal elements of the economy.  Both of these areas -- physical and personal infrastructure -- are seriously lacking in the US and need immediate attention if we're going to compete with countries in the 21st century.

And yet, at a time when we need the investment for both a short and long term reasons (which we always do; the reasons are now simply more pronounced); people have forgotten about the need for and importance of this type of macro-level investment, instead arguing for a policy that does not work in any way shape or form -- at least if you look at the data coming out of the UK and the EU.  Put another way, you've put your hand on the stove, turned the